Steven Harris felt like he had hit the jackpot when he got a job tuning and fixing pianos in Harrods department store after spending most of his life in care and coming out with no qualifications. There were famous clients and he could reach out and touch its famous facade lights from the workshop at the top of the landmark building. Then he found he lived a few yards in Chatsworth Way, West Norwood, from one of his work colleagues – who was still working in his 90s. Here he tells TOBY PORTER his story.

Piano tuner Steven Harris can look back to a childhood spent in several children’s homes, including the Beechholme in Surrey.

He was then fostered with a Stevenage family.

He left school at 16 to live with his dad in West Norwood.

He said: “What could I do for work, how could I make a living, without any formal qualification?

“My father was a composer/musician, who later on had works commissioned by the Lambeth Orchestra. It was he who suggested ‘Hey, pianos will always need tuning, won’t they?’”

In the 1980s, the South London Press invited readers to contribute their experiences and memories about their life and work.

Steven wrote in and told us about managing to secure a position with the store of the rich and famous, Harrods.

He was still only a teenager and found it a mystery why they should want to take him on.

This was not to work in the store, but to be trained as a piano tuner and technician.

Despite the spate of village piano smashing competitions that were quite popular in the 1970s, pianos were still in demand by many.

Steven later found out, coincidentally, living just down the road from him in West Norwood was another Harrods piano tuner who was still working in his 90s.

They weren’t aware of each other’s existence to begin with, but later on met up and had many a talk about old Bechsteins, Steinways and certain difficult customers.

The elderly tuner was John Weaver, who, at one time, did a sort of tuning circuit for Harrods, travelling down to as far as the West Country tuning for affluent clients, returning by a different route to cover other areas on his way home.

He reminisced with Steven how – as a younger man – he enjoyed driving down to these places in his MG and even had to go across the water to St Michael’s Mount near Penzance to tune the grand piano in, what looked to him like a castle.

“Once we met, we found another coincidence – we’d both been brought up in care,” said Steve.

Weaver had been brought up in Hackney, but settled in West Norwood’s Chatsworth Way in 1950 and raised his own family there.

Bearing in mind that founder Henry Harrod became an orphan when still a young boy, it might not be such a coincidence.

Once trained and qualified, Steven also found himself tuning pianos in all sorts of places and for all sorts of people – prisons and palaces, the famous and ordinary people whose pianos were prized possessions.

He said: “I don’t like name-dropping, but actors such as Sir Anthony Hopkins is one example of the clients I worked for – along with numerous high-profile politicians.”

On occasion, lesser-known Harrods clients were prone to apologizing to Steven for only having an upright piano and not a grand, even though the Harrods uprights still cost many thousands of pounds.

Eventually, he wanted to do something about that lack of qualifications, so started the long journey of higher education.

After a degree from Roehampton University, he got a teaching qualification.

He now teaches in South London and Kent – not that he hasn’t maintained a few special clients.

With many schools being cash-strapped, he has also often found himself having to tune the school piano where he works.

“Out-of-tune pianos are still very painful to my ears,” he said. “Also, with some of my classes, I like to try out some of my children’s stories on my pupils as guinea pigs.

“It’s notoriously hard to get published, but I have had much better success with publishers Book Guild Ltd, who have published The Man from Harrods, my memoirs of coming to London and working for that exclusive emporium, Harrods of Knightsbridge.

“It is much less about the actual pianos and much more about the clients who owned pianos – some of the owners prove to be eccentric and intriguing,” he said.

There are also stories. One time, he mixed up his addresses. 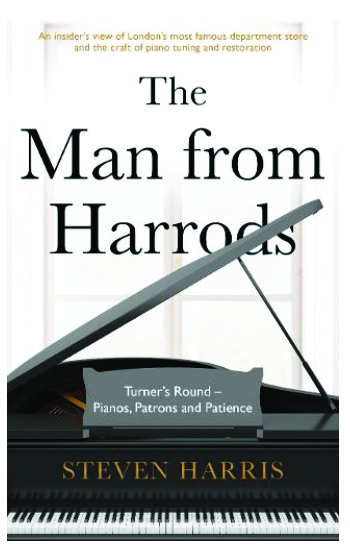 He said: “On hearing the word Harrods, the maid of the house automatically let me in and I began work tuning the piano until, after about 20 minutes and not recognizing his surroundings at all, I realized I was in Egerton Terrace when I should have been in Egerton Gardens. I had to somehow make my excuses and leave quietly.

“I would like to kill a few myths as well – most piano tuners are not blind and it is also very rare for any of them to have perfect pitch. It’s just not needed.”

Steve Harris’ book, The Man from Harrods, is available from Dulwich Books, Croxted Road, and can be ordered online.

3 thoughts on “In tune with the life of celebrities”