Relegation battles are not meant to be enjoyable – and Millwall have certainly been putting their supporters through the full range of emotions in recent weeks.

The Lions are four points clear of the Championship relegation zone, but teams have needed at least 41 points to survive in each of the previous five seasons. And at present, getting those seven points sounds a lot easier said than done.

Tuesday night’s defeat in front of the lowest-ever crowd in the KCOM Stadium’s 17-year history was more evidence of that. 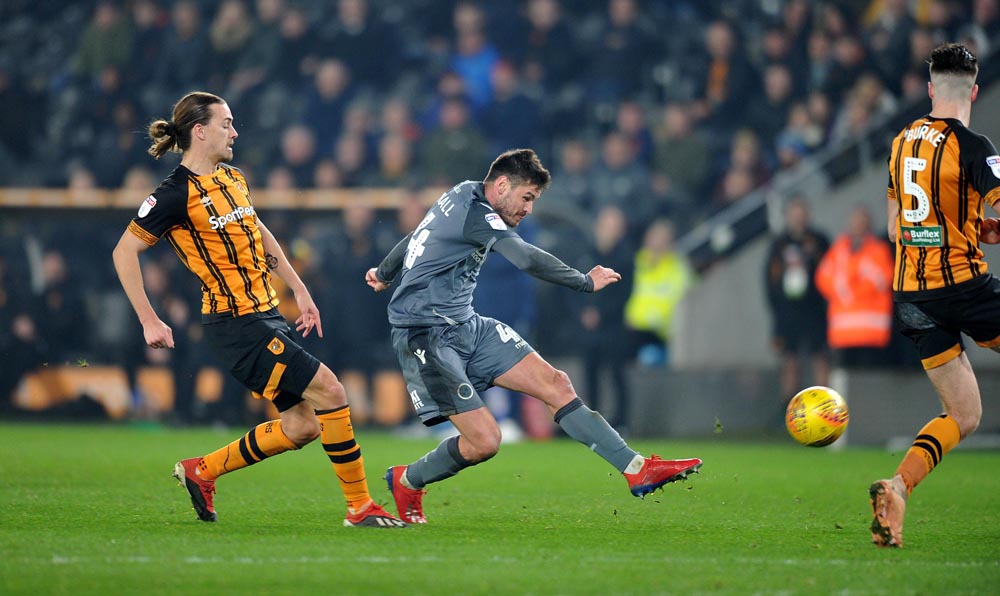 Just 10,191 fans were there to see Murray Wallace hobble off and leave Neil Harris with potentially no fit full-backs – Mahlon Romeo missed out through illness – ahead of the visit of table-toppers Norwich City on Saturday. The Canaries are second in England’s top four leagues in terms of the most goals scored this season. Only Manchester City, who remain on course for a prestigious quadruple, have managed to net more.

Not for the first time this campaign, Shane Ferguson was forced to fill in at left-back after Wallace injured both his knee and ankle during the build-up to Jarrod Bowen’s fortunate opener.

The Scottish defender, who has scored the winners in the last two FA Cup ties, could face a spell on the sidelines. 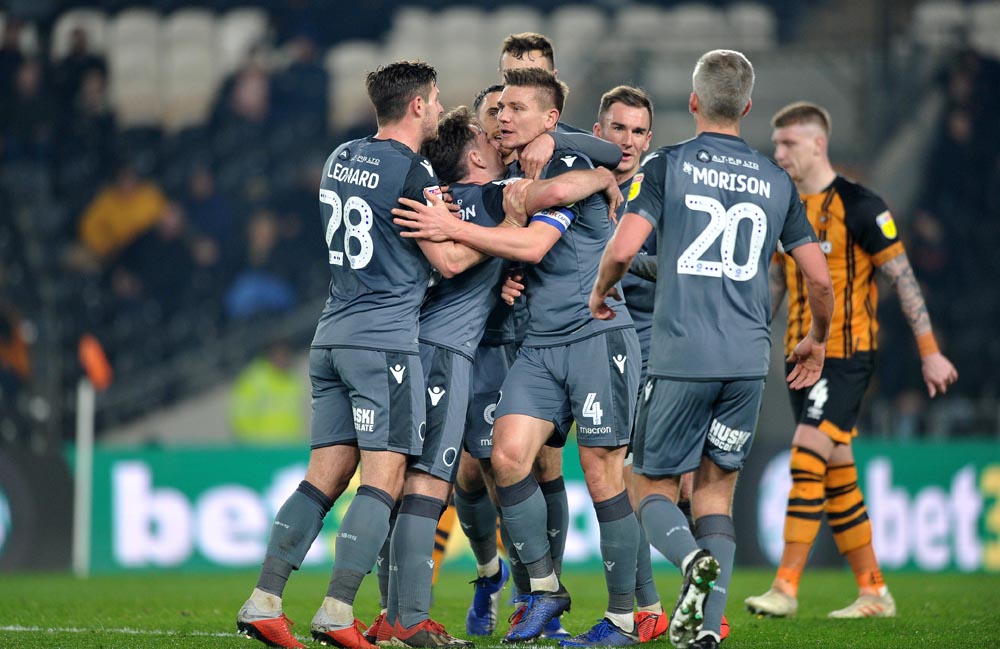 Wallace attempted to hook Kamil Grosicki’s low cross away from danger, but his clearance arrived at the feet of Tigers skipper Markus Henriksen, who accepted the gift by firing towards goal. It was a painful moment in more ways than one as his shot took a wicked deflection off Bowen, who fortunately bagged his 17th Championship goal of the campaign, leaving Jordan Archer grasping at thin air.

Wallace’s injury forced Harris to shuffle his pack, introducing captain Steve Morison, with Millwall reverting back to 4-4-2. Hull were clearly targeting their lack of natural full-backs and if it wasn’t for some last-ditch defending from makeshift right-back Ryan Leonard, Nigel Adkins’ side would have been more than one goal to the good in the opening quarter. 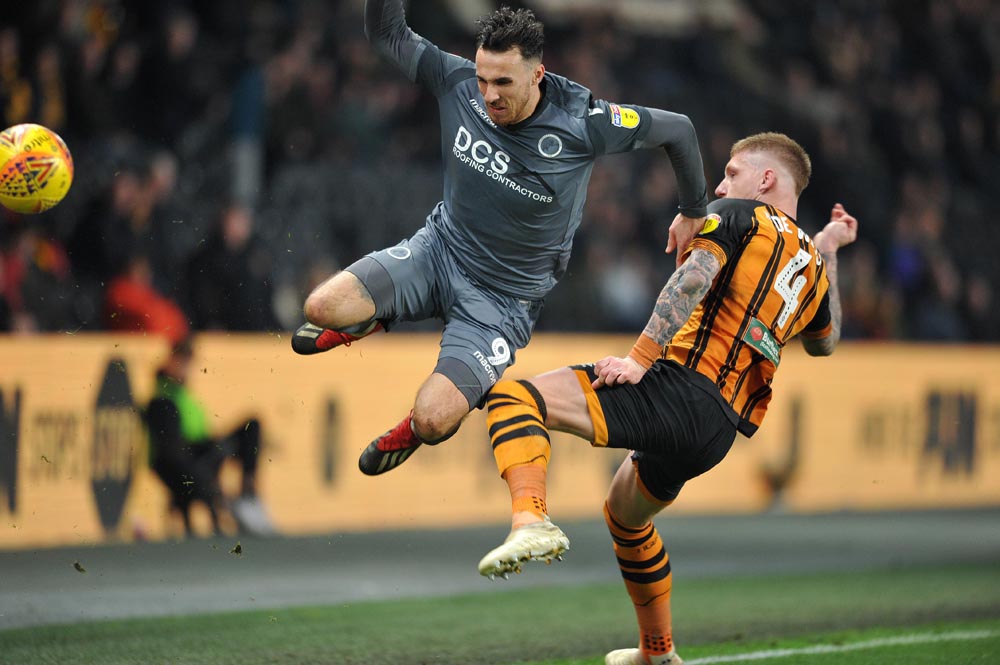 The Tigers boss admitted that this was the way his side always play, but it looked like a cunning plan, with both Grosicki and Bowen a thorn in the Lions’ side all evening.

But like so often this season, and with the chips very much down, the South Londoners made something out of nothing and got themselves level. It came from the unlikeliest of sources as Shaun Hutchinson took advantage of some lacklustre Hull defending to notch his first league goal since the 1-1 draw with Sunderland last March.

At that moment, Millwall looked in the driving seat to record consecutive away Championship victories for the first time this season. But the Tigers bit them once again, just moments before the break as Marc Pugh marked his first start for the club with his first goal. 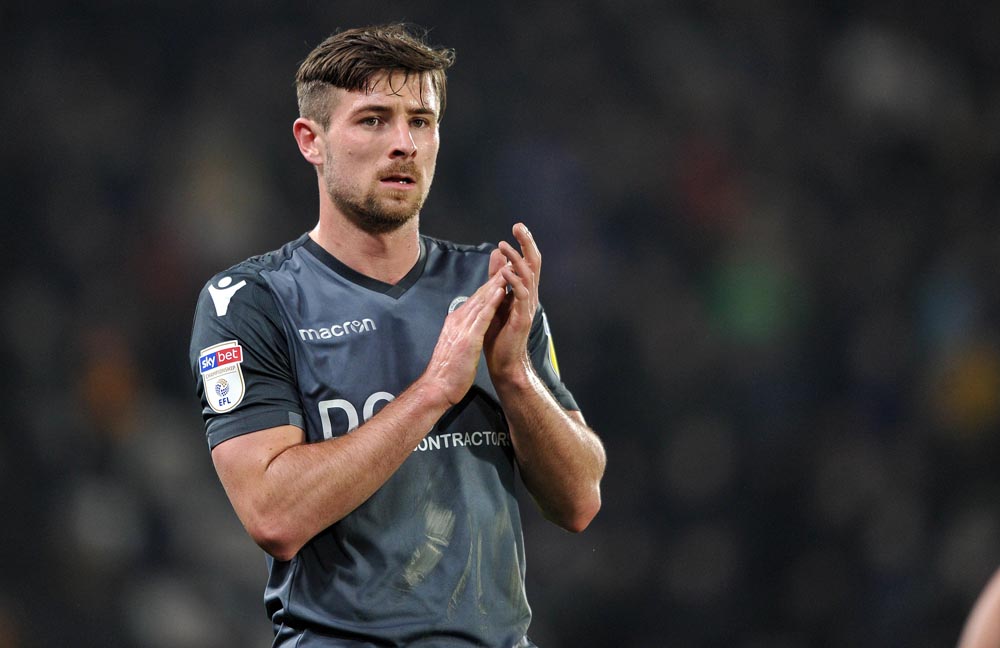 The on-loan Bournemouth midfielder matched his exquisite control with a clinical finish, but it was more evidence as to why Millwall have already conceded five more goals -50 – than they did in the whole of last season.

And don’t let the three goals in that opening period fool you, it was a drab affair and lacking in quality.

Harris’ men appeared early for the second period and had far more intent from the word go.
It’s almost as if the half-time whistle works as a wake-up call for the South Londoners, who have performed better in the second-half in the majority of their games recently.

Jed Wallace – relatively quiet by his own standards in the opening 45 minutes – began to find his feet and it was no coincidence that Millwall’s own performance went up a notch. He created chances for both Lee Gregory and Ryan Tunnicliffe, but both failed to hit the target.  Former Manchester United and Fulham midfielder Tunnicliffe came as close as anyone on 56 minutes, riffling a left-footed volley through a crowded Hull penalty-area, but David Marshall showed all of the qualities that earned him 27 caps for Scotland as he flung himself across the goal before wonderfully tipping around for a corner. Harris and assistant boss Dave Livermore were almost already celebrating, as were the majority of the travelling fans stood behind the goal.

Morison tested Marshall, while Jake Cooper’s header was scuffed off the line by Bowen, but that chance was more evidence that it wasn’t going to be their day.

A point would not have been undeserved, but Millwall must start performing from minute one and stop letting teams have a free ride in the opening 45 minutes.

It feels like one step forward, two steps back since that wonderful victory at Derby County just nine days ago. A trip to Bolton Wanderers follows the visit of Norwich and these next few weeks feel mighty significant for Harris’ inconsistent Lions side.