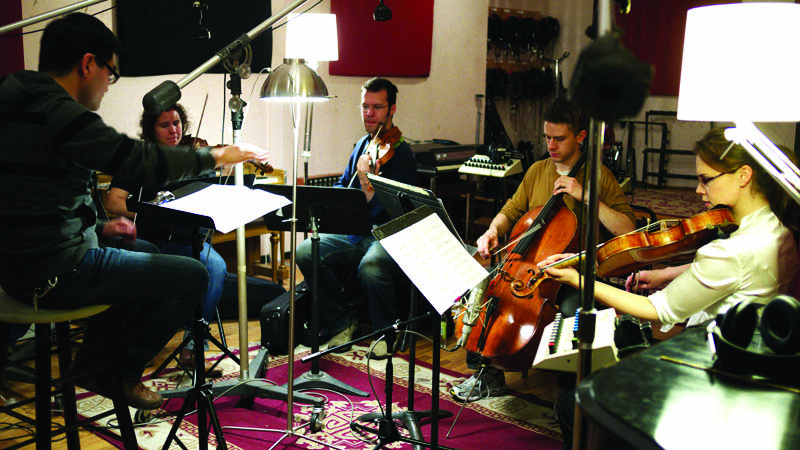 Dai Fujikura has an infectious sense of curiosity and wonder. As an internationally renowned and award-winning classical music composer, he has spent his life travelling the world.

His friends are pop stars, Nobel Prize winners and poets. His pieces are played to sold out theatres across the globe. But he is not motivated by the grand and the glamorous.

“Everyday life for me is an inspiration,” he said.

“Let’s say you get commissioned to write something, you need to inspire yourself.

“Some people go climb a mountain, others go to an exotic place. For me, you have to find something that is so personal and so dear to you.”

Dai lives in Forest Hill and six years ago he was sitting anxiously in Lewisham Hospital as his wife gave birth to their daughter Mina.

He says: “I’m a man, so therefore in this situation I am absolutely useless. I was so quiet that the
doctor asked my wife if her husband was okay. I was nervous.

“If you’re ever at a birth you will be amazed. Hours and hours of waiting and then the next moment a child is in the room. It just slips out and starts crying.

“I was amazed how the human life begins. It seems obvious, but it begins so abruptly. There’s no slow introduction. They just come to life in a moment.”

“Traditionally an orchestral piece starts slowly, exploring themes and then the music builds. But with this piece specifically, I wanted an abrupt beginning. It starts in the middle,” he says.

But this was not the first or last time his daughter’s existence moved Dai to compose.

He chartered the stages of his wife’s pregnancy with three pieces covering each trimester period.

When Mina was four days old he wrote a piece about the movements of her legs and at two weeks he composed a song for a solo horn about the softness of her cheeks.

He says: “Every piece has a specific topic. I get obsessed with several little things and one topic of inspiration is enough for years of writing.”

Dai was born in Japan and moved to the UK to study aged 15. As a young boy learning piano in Japan he was desperate to break free of the restrictions of traditional music and started composing when he was 10.

His work has taken him across the globe, but he has a special link with London and Lewisham
in particular.

He says: “A lot of my inspirations are connected with daily life in the south-east.

“Like many new parents I have had to visit so many parks with my daughter. I became an expert.

“I talk about London quite proudly when I’m abroad. If I’m in Paris they tell me that they have the Luxembourg gardens. Yes, I say, but you have to go on a Metro to get there. In London it’s the other way round, you have to walk through parks to get to the Metro.

“They’re everywhere. Turn one corner and you find a park, turn another corner and another park is there. Near me we have Hilly Fields, then there’s Ladywell Field’s five minutes away.

It’s crazy. “Lately I am obsessing about the topic of bacteria. I was commissioned by three orchestras to write one piece, called Glorious Cloud.

“I was speaking to a Nobel Prize winner on this topic and he was telling me that the whole point is that we share this life with bacteria.

“They are the ultimate social network. They are connecting and connected.” He then wrote Glorious Clouds for the one thing he thought most vividly reflects a social network in music, an orchestra.

A selection of Dai’s work will be performed on February 18 in a show called Dai Fujikura Portrait, which looks back across his career.

His pieces will be performed by musicians using instruments such as the violin, saxophone, clarinet, horn, bassoon, and the toy piano.

The toy piano is one of Dai’s favourite instruments to compose for. He said it produces a “beautifully unclear sound” and he is bringing his daughter’s own toy piano for musician Mei Yi Foo to use on Saturday.

To buy tickets for the show go to www.wigmorehall.org.uk