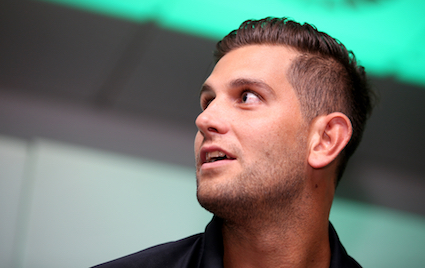 Sport
20th August 2018 Richard Cawley 0 Comments
BY MARCUS HOOK
Surrey’s T20 captain Jade Dernbach admitted that needing other Vitality Blast results to go his side’s way, in order to qualify for the knockout phase, underlined the Oval outfit’s predicament.
By failing to get over the line in some of the close contests, not even two wins out of two to end the campaign was enough to see Surrey sneak through to the last eight.
Nevertheless, following last Friday’s thumping victory over Glamorgan, Dernbach said he had enjoyed leading Surrey, but will now hand the reins back to Rory Burns for the County Championship run-in.
“We always knew coming into this game we had to get a win, but we were relying on other results. That’s never a good place to be, but that’s where we found ourselves.
“The phrase missed opportunities during our campaign comes to mind. We left at least two victories out there. Certainly, the second group game against Kent and last Sunday against Gloucestershire were two we let slip through our hands.
“When it gets tight, as it tends to do in the South Group, it’s results like those that make a difference in the end.
“I’ve loved having the captain’s armband. It’s a real honour. The boys have given me everything and that’s all I can ask for. We’ll go away and do some thinking and make sure we’re better in T20 next year.
“We just have to dust ourselves down quickly and get this out of our system. We know we have a huge six weeks ahead with the chance of winning the county championship.”
AN OVER OF STATS
Ball 1 – Despite being absent for four of Surrey’s Vitality Blast group games, Aaron Finch finished the round-robin phase as the competition’s leading run-maker with 589 at an average of 147.25.
Ball 2 – Of the 11 leading run-makers in the Blast, only four play for a team that has made it through to the quarter-finals. Contrast that with the leading wicket-takers (eight out of 11).
Ball 3 – The T20 group phase produced 15 hundreds up and down the country, but Finch was the only batsman to score two.
Ball 4 – No one hit more sixes than Finch, although his 31 maximums was matched by Somerset’s Cory Anderson, who clubbed five in Somerset’s victory over Surrey at Taunton just over a week ago – a match that, crucially, Aaron Finch missed due to a family bereavement.
Ball 5 – Since the domestic T20 became two divisions in 2010 – nine in the North and nine in the South – Surrey have progressed to the knockout stage three times.
Ball 6 – In four of the other six years, the Oval outfit have, by finishing fifth, been the next best team in the South group.