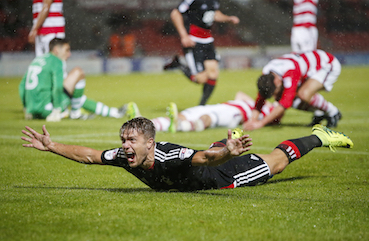 Jamie Ward has spoken about his relief at being back in the first-team fold at Charlton Athletic – describing being frozen out of the senior picture at Nottingham Forest as “horrific”.

The 32-year-old joined the Addicks on a loan deal at the end of August.

Ward’s debut was initially delayed by international duty with Northern Ireland but he played 75 minutes in last weekend’s 2-0 win at Bradford City.

“It felt great to get those minutes in the tank but not so good playing the game,” he said. “Football wasn’t the winner with me. I was a bit rusty. It has been a long time since I trained with first-team footballers this season. Apart from when I’m away with Northern Ireland I’ve been with the rest of the lads in the bomb squad.

“You lose that bit of sharpness when you are training with the U23s.

“It was horrific [being in the bomb squad]. It depends how you get treated and that varies from club to club. I know a lot of clubs where you are treated a lot better than we were at Forest.

“It wasn’t great at the start. Things got better eventually, because they had to. There are guidelines they have to follow, things like that.

“I can’t go into it too much or I am liable to be fined and the club would love to do that.”

Ward’s deal at the City Ground is up in June.

And he admits a permanent move to Charlton is something that appeals.

“Yeah, definitely – as long as everything is good for my family. We said in that last window that I was ready to move anywhere in the world.

“It’s a case of me just trying to perform, do as well as I can to try and secure another two or three years for my family.”

Ward played 149 games for Derby County before leaving on a free transfer for fierce rivals Forest in July 2015.

“There was a four-year contract on the table so I think it would’ve been stupid to turn it down,” he said. “I have a family to worry about. They are the most important people in my life, the most important thing is securing a nice life for them and myself as well.

“You have to think about other things rather than just all football. People don’t understand that.

“My Forest career hasn’t gone too great, having three loans. I had injuries and there was a lot of change in manager at times. Little things like that never helps.

“It didn’t help when I came back from the Euros [in 2016] and our new French one [Philippe Montanier] didn’t know who I was when I walked in the building. I knew I was off to a bad start then. I had to get on with it, I knew I wasn’t going to play and was trying to find another club.”

That proved to be Burton where he scored four goals in 15 appearances.

He joined Cardiff in January of this year but only featured four times as the Bluebirds won automatic promotion to the Premier League.

“It was very frustrating because I got injured in my first start and it kind of killed my momentum to a certain extent,” said Ward. “I didn’t play much but it was great to be a part of and I’ll have good memories when I look back, it was something positive in my career.”

Ward has played 280 Championship matches – compared to just 10 in League One. But dropping a division was not a deterrent.

“It’s about getting game time and start enjoying my football again,” he said. “That is the most important thing. As long as those two things happen it doesn’t really matter what leagie it was.

“It’s about being happy, scoring goals and setting goals up.

“The sooner I get my sharpness back then the sooner I can actually perform at the levels I’m capable of.”

Scoring goals has not been an issue for Ward against Charlton. He has netted six times against them before the South Londoners relegation to League One.

“It’s been great when I have gone to The Valley as part of an away team – hopefully playing for Charlton it can help me as well.

“It has been a while since I have scored a goal, so anything could happen in terms of celebrations. I might have to get some advice off my son – he plays Fortnite [the computer game]. But doing a dance like that won’t be happening, I haven’t got enough rhythm for those!”

Ward did not speak to Charlton manager Lee Bowyer until after his move was completed.

Things only started progressing after midday and heading down to London and wrapping things up before the 5pm deadline was a non-starter.

“It was just a case of signing the papers and hoping I don’t get injured in the next four months,” he said. “The manager told Steve [Gallen] head of recruitment that he wanted to get me and Steve had to sort it out.

“Once I heard about the club being interested it didn’t matter about talking to the manager. I knew people who had played there – like Josh Magennis. Everything he said was good. You speak to people who you trust about things and Josh is one of them. We are quite tight and I knew he wouldn’t tell me lies, some people say anything to get you to clubs at times.”

“I had the chance to go to QPR a few years ago,” he said. “It was the year they got promoted but we had literally just had my boy, who is seven now, and at the time I needed security for the family.

“I needed to be there to help my wife, it would have been a bit harsh to uproot and leave him up north with the missus. I signed for Derby in the end.

“Up to now Derby has been my best time in football, apart from missing out in the play-off final. Everything else about it was really good. It was my best football I played.

“It was frustrating when I got released but I wish them well. I always have a good look at what they are doing and hope they can kick on now.”

A fourth straight win would not quell talk that Lee Bowyer’s side are finally going to get it right in terms of earning a Championship return.

“Obviously everyone is going to get carried away with us having three wins on the bounce,” said Ward. “But we have got to take it each game at a time because there is a long way to go.

“At times it is not going to be pretty but we know what it takes to win. As long as we work hard for each other than the manager can forgive us if the result isn’t quite right.”

2 thoughts on “Jamie Ward on “horrific” time in Forest bomb squad, aiming for a Charlton deal and promotion prospects”