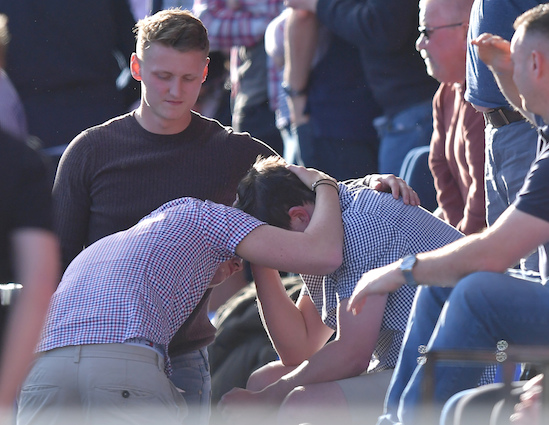 Jason Pearce admitted that Charlton Athletic were not good enough in the League One play-offs – and has urged a quick resolution to takeover talks.

The Addicks look set to be under new ownership very soon with Australian businessman Andrew Muir close to completing a buyout.

And Charlton captain Pearce has stated his happiness to stay at the club despite their failure to gain promotion.

The 30-year-old signed a contract extension until 2020 last summer. He said: “I’d love to do that [stay] but it has happened before, new owners come in and they want their own players.

“As a player you don’t know what will happen. My face could fit, or it could not fit. All I’ve done this season is try and give my all every time I play and hopefully that is good enough.

“There are going to be a lot of changes in the summer with the takeover, hopefully that gets sorted quickly. We’ve got a lot of loan players. Hopefully the club regroups and we can have a good go next year.

“The nucleus of the squad is good enough, without a shadow of doubt. We need to add some quality players. You look at the sides who have been up there and gone up – they’ve got experienced League One players with potential to play higher. We need to make sure we recruit well.

“We’ve seen with Joe Aribo and Ezri Konsa that we have got some young, talented players but we need some experience in there as well.

“Now the season is over it [the takeover] needs to be sorted as a club. It’s important it happens sooner than later.”

Pearce had a different play-off assessment to caretaker boss Lee Bowyer, who felt his side outplayed Shrewsbury Town despite 1-0 defeats in both legs.

“We’re all massively disappointed, as well as the fans will be. We just weren’t good enough over the two legs. Shrewsbury deserve to be in the final. We gave our all.

“We’ve spoken about it before for a lot of this season, is it decision-making in the final third and putting the ball in the back of the net – it’s been a problem a lot of the season.

“Lee Bowyer just said [in the dressing room] that we gave our all. That’s all fans can ask. We wanted to get to the final and go up.

“Going back to when he took over, people had written us off.  But we still believed we could get there [to Wembley], once we got there then we wanted to get all the way.

“He [Bowyer] has been fantastic for the boys. You can see the team spirit and togetherness. Everyone has given 100 per cent. We’ve given it a real good go but in the play-offs we have just come up short, we’ve not been good enough.”

Charlton’s players went over to the 1,568 travelling fans on Sunday despite a pitch invasion by jubilant home supporters making that more of a challenge.

“They’ve been fantastic for us,” said Pearce. “They have really helped us to get to where we were on Sunday. I can’t thank them enough on behalf of myself and the team. We’re losing 1-0, 2-0 on aggregate, and they are all still there. We appreciate all their support. I just want to apologise we couldn’t get to the final and go up.”