Jed Wallace has vowed to give his absolute all for Millwall – and that will always be the case  no matter how long is left on his deal.

The 27-year-old attacker, the subject of a bid from Middlesbrough in 2018, is inside the final 12 months of his contract at the South London club.

Wallace has hit double figures in his past two Championship seasons. The former Portsmouth and Wolves player is adamant any uncertainty over his future will not impede his attitude or approach.

“My performances can always be up and down but my level of effort – whether I had 10 years on my contract or 10 hours – will never be different,” Wallace exclusively told the South London Press.

“I played in non-league until I was 17 years old. I’ve had the ambition, from the age of 10, to work meticulously to get to where I am now. I’m certainly not someone who takes it for granted.

“I absolutely love my job. I feel very, very  privileged  to play in one of the best leagues in the world and play for a club I’ve loved playing for since I’ve walked through the door. That’s certainly not going to change.

“Every time I pull on a Millwall shirt I give my absolute all. Sometimes I might misplace a pass or not win a tackle, but I’ve played more than 200 games for Millwall – I give my all on the pitch for the football club and off it, for the community. That will never change, regardless of what the contract situation is.

“I’m just focused on getting as fit as I can and playing as well as I can for Millwall, to get them as high in the table as we can – as I always have. I’ve signed for Millwall twice on loan, once permanently and also signed two contracts in that time.

“My commitment to Millwall isn’t something that I question. And I think the fans would have seen that if they saw me play against Motherwell and Watford in our pre-season [friendlies].

“I’ll always give 110 per cent, which is why I think I’ve got a good relationship with the fans.”

Wallace would be able to leave on a free transfer next July if he does not renew terms. But all he is focused in on being ready for the Championship opener at QPR on August 7.

Wallace said: “I’m trying to get as fit as I can because I’m finding the pre-season runs quite hard!

“There was a conversation a couple of months ago [with Millwall about his contract]. I’ve had time off to enjoy with my family. This time of the season you don’t really worry about what is going on off the pitch – you focus on getting fit and getting as strong as possible, as a group, for the first game against QPR.

“I’m not overly thinking about it. I’m going out and playing as well as I can and letting the club and whoever looks after me deal with that [other side].” 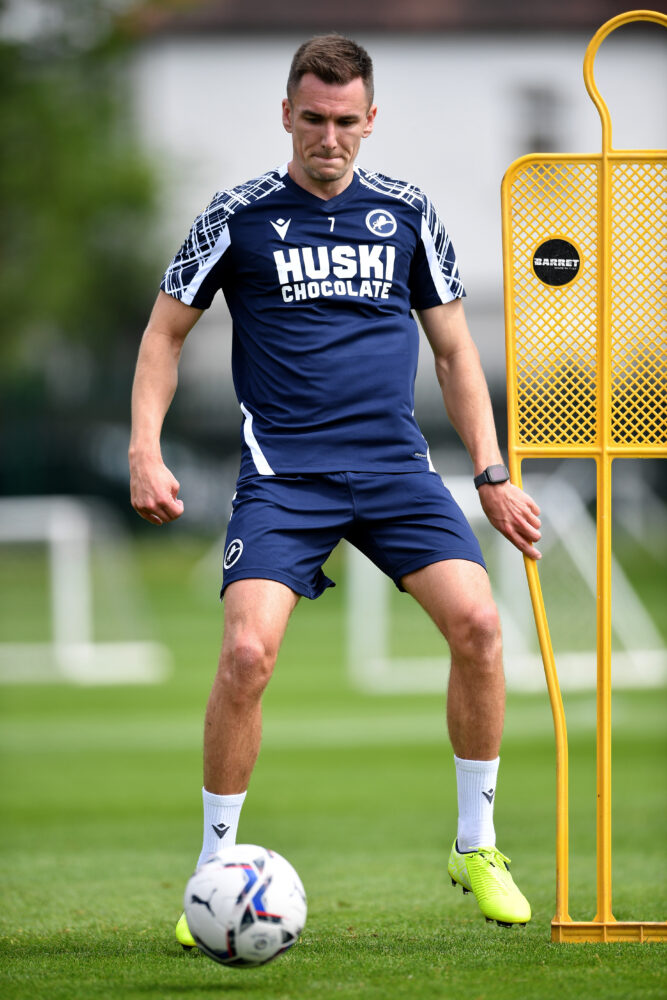 Wallace isn’t talking like a player who expects to be on the move this summer. And he is relishing the EFL Cup tie at home to Portsmouth on August 10.

Wallace played 121 times for the South Coast club, scoring 17 goals in his final season there to land a move to Wolves, then in the Championship.

“I’m buzzing for that,” said Wallace. “It is huge. My missus’ family are all Portsmouth, so every time there is an FA Cup draw we would pick Portsmouth away over Manchester United away.

“It will be the first time I’ve played against them since I left eight years ago.

“The added incentive is that the Millwall punters will be able to give Willo [Shaun Williams] the send-off that he deserves. That is also a massive plus. It feels like it has fallen perfectly.

“I’ll always have a huge affiliation with Portsmouth and Millwall. They are two clubs I’ve very much been in love with when I’ve played for them. I’ll always look out for them 10 or 15 years down the line. They are close to my heart. I’d have hated it if that was behind closed doors.

“Hopefully the away end will be packed out at QPR. Then we’ve got Pompey and Blackburn [at The Den]. They should be brilliant occasions.”
Wallace has played at every level in England’s top four divisions, apart from the Premier League. It remains the ultimate goal.

“I’ve never made any secret of that,” he said. “When I was in non-league I looked at players who had been on that journey – someone close to home, like Steve Morison. To emulate doing that at Millwall is my number one target.

“That is what drives me on every day, the thought of getting Millwall into the play-offs and trying to sneak over the line. I’ve given everything for that over the last three or four years in the Championship.

“Me and Coops [Jake Cooper] have probably played more minutes for Millwall over that period than anyone else.

“I said it from day one that with the gaffer here now and the chairman John [Berylson] – along with Steve [Kavanagh], who is running the club very well – they can really push this club on and take that next step.

“Millwall had been a bit of a yo-yo club between League One and the Championship. But since Neil [Harris] took over and we got promoted, we have really managed to stabilise ourselves.

“You probably look at the likes of Millwall, QPR and Blackburn as really stable Championship clubs. Why can’t we push on towards the top half of the table, like we have in three of the last four seasons? And with the addition of two proven players in Sav [George Saville] and Benik [Afobe], it is exciting times ahead.”