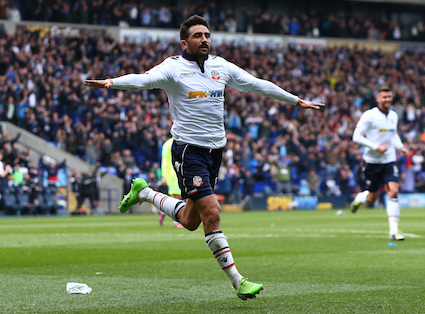 Jem Karacan is hoping he can land a longer-term deal at Millwall – and the fact he already knows what it takes to be a Den fans’ favourite can only be a help.

The Lewisham-born midfielder was loaned to the Lions in 2008 while an emerging talent on Reading’s books.

Now Karacan, who was raised in Catford, is back with his local club after signing a short-term deal until the January transfer window.

There is a bit of fitness work to be done as the former Turkish U21 international left Bolton Wanderers at the end of May. But he had a 45-minute runout for the reserves on Monday, with Lions manager Neil Harris provisionally pencilling in some first-team minutes in the EFL Cup against Plymouth on Tuesday.

Oxford United manager Karl Robinson made no secret of his attempts to sign Karacan this summer.

But instead the player was happy to go for less security – in terms of contract – than he could have got elsewhere.

“I had offers from all over,” explained Karacan. “The Championship, League One, Australia and Turkey. It was more about finding the right one for me and my family.

“This is an area I know and the gaffer was a massive part too. I played with him at Millwall. Once he made me feel wanted it took about a day to sort out.

“This works quite well both ways. It is a chance for me to come in and prove myself to the gaffer, although he knows what I can do even if it was a long time ago.

“I’d love to earn a longer contract but I want to be playing football. I’ll give whatever I can to the team.”

Karacan first joined Millwall at the end of the 2007-08 season.

“From what I can remember we still needed a few points to stay up and confirm our status in League One. I played seven games and loved every minute of it.

“We had young lads like Ali Fuseini and Jay Simpson. I just kept my head down because it is one of your first loans. Neil was the main man at the club – a legend.

“It was an eye-opener to play at The Den, an amazing experienced. It is something you have to get used to quickly. I watched the game at the weekend [ against Derby] and it is one of the best atmospheres out there.”

Not every player makes a success of their times with the Lions, or win over the supporters.

Karacan is well-placed to say how he feels it can be achieved.

“You have to give it everything you have got. The fans expect that. If someone is leaving everything out there it is always appreciated. I learned that before – you have got to get stuck in.

“My uncle is still a season-ticket holder, even to this day. So I always knew what it was all about.

“It is crazy it is 10 years, how quick that time has gone. It seems like only yesterday, but then I look back at everything that has happened in my career – the promotion at Reading, playing in the Premier League, going to Turkey and playing Champions League [for Galatasaray]. You forget what you have done.

“Hopefully I can bring that experience to the group and help them through this league.”

“I had to prove myself on loan and Millwall gave me that opportunity,” he said. “The next season after that I was playing in the Championship for Reading week in and week out.

“It gave me the stage to show I can cope with that level of football. It is something I’ll always be thankful for, giving me the chance to go out and achieve what I did in my career.

“I’ve been back a few times to play against them but I think a few fans probably have forgotten I was here because it was so long ago! It would be lovely to get a big cheer again.”

Karacan has started his coaching badges. Did he see Harris as nailed-on managerial material when he shared they shared a dressing room a decade ago?

“He was always a leader. The fans loved him to bits. He has done unbelievably well.

“Just to be involved in watching his teamtalk at the weekend, you could see how much this place means to him – how anything less than 110 per cent isn’t enough.

“It’s the first time I have played for a manager who I also played with, which is a new experience. But I’m sure I’m going to enjoy it.

“I’ve started my coaching badges and I’ve spoken to him about that, learning things off him about different sessions and tactics.

“I want to keep going until I am 35 but the badges are something you want to get done. You don’t want to be finishing and getting them started then. It makes you look at the game from a different angle.”