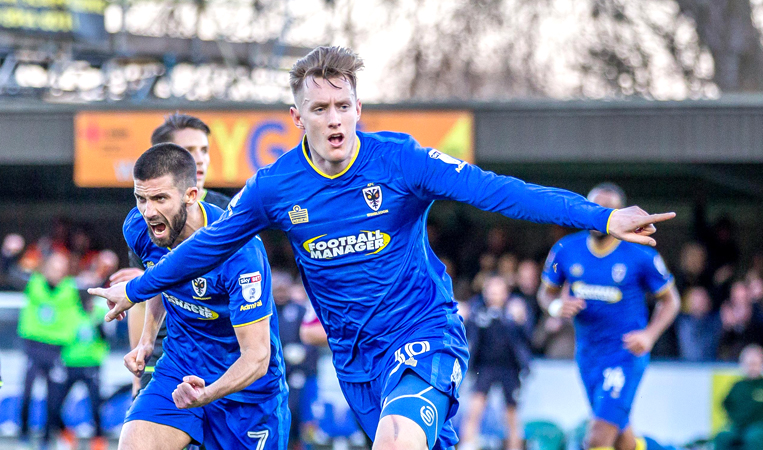 By Paul Jeater at The Cherry Red Records Stadium

The fourth official held up the illuminated board to indicate that there would be just three additional minutes. Groans were audible as perplexed Dons fans wondered how the referee had not added on more time for blatant time-wasting. A steady stream of spectators headed towards the gates, hoping to make a swift exit.

The game it seemed, in spite of all the Dons endeavour, was heading towards a goalless draw. But there was time for one last attack from the left wing.

Harry Forrester, introduced shortly after the hour mark to add some invention to the Dons midfield, crossed the ball and with pinpoint accuracy found the head of substitute striker Joe Pigott, who rose to head the ball past Rovers goalkeeper Adam Smith.

What followed were wild celebrations on the pitch, on the terraces and in the stands. Only seconds remained before the final whistle and the Dons had secured three invaluable points to lift themselves out of the relegation zone and end a run of four straight League One losses.

Bristol Rovers were producing the type of results that gave their more optimistic supporters hope that the play-offs were still in reach coming into the contest. Wimbledon manager Neal Ardley made changes after the midweek defeat at Plymouth Argyle with George Francomb, Jon Meades, Andy Barcham and Cody McDonald preferred to Callum Kennedy, Forrester, Tom Soares and Pigott.

The first 20 minutes were devoid of clearcut chances and it was obvious that the visitors had limited ambition, preferring to attack on the break.

Perhaps the best chance of the half fell to Rovers midfielder Liam Sercombe, who found himself one-on-one with Dons keeper George Long in the 36th minute. Long saved with his feet. It was really no surprise that the game was scoreless at half time.

The first 15 minutes of the second-half resembled the first, plenty of effort but with few chances created.

Just after the hour mark Ardley began to ring the chances, defender Darius Charles, struggling with a hip injury, was replaced by Forrester.

The Dons switched to a 4-4-2 formation with Forrester seeming to have license to roam.

Rovers struggled to deal with this and Forrester’s presence allowed Lyle Taylor more freedom to exploit opportunities down the right wing.

The introduction of Pigott gave the Dons a striker who could hold the ball up and bring midfielders into the game. The last 10 minutes saw the Dons dominate possession but it seemed the points would be shared until Pigott’s goal at the death sent the bulk of the 4,837crowd home happy, and lifted the Dons to 18th place.

With Wimbledon having three out of their next four games at home, there is a good opportunity to move closer to mid-table security.