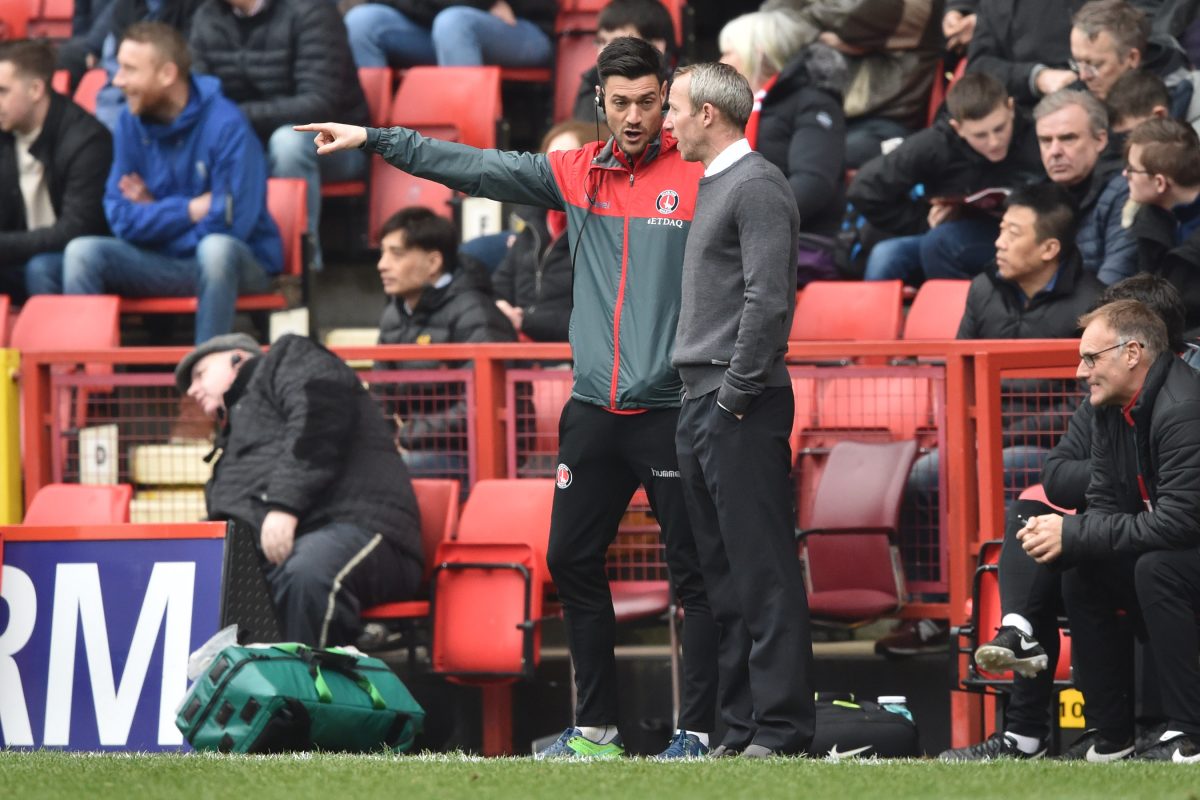 Johnnie Jackson has enjoyed being a player-coach this season but has admitted: “I couldn’t do it for any longer.”

The 35-year-old Charlton Athletic favourite straddled both roles after signing a new deal in the summer. The plan had been for him to move purely into the coaching side at the end of the League One campaign.

But there has been a further twist to Jackson’s situation last week. Karl Robinson’s decision to step down as manager has seen Lee Bowyer taking caretaker charge with the club captain assisting him.

The pair are set to remain in place until a takeover of the club is completed.

Jackson admits the scaling down of his playing responsibilities has not always been easy to take – even more so as Charlton’s promotion push stuttered so badly under Robinson in recent months.

“I don’t think many people like not playing and I’ve never taken it particularly well,” he said. “This season I promised myself I wouldn’t get emotionally involved with that. I knew my role was to be used if needed and be a coach.

“I promised myself I wasn’t going to get the hump when I was not playing, but that is easy said. At the start of the season we were winning and it was easy – the team picks itself. I just want the team to do well, so back then it was fine. I just concentrated on the coaching.

“But then we had so many injuries and the results hadn’t been great. I found myself thinking ‘if we’re struggling to win a game, would I make things better?’ I might be deluded, I don’t know, but I can’t help thinking like that.

“I have been used. But when you are training every day to be ready – and because of that you are losing the coaching fix – to not then play at the weekend leaves you  asking ‘what am I doing?’

“You could only do what I have been doing for a year. I couldn’t do another year. I wouldn’t be able to deal with it. At the end of this season I am a coach and I need to  be coaching every day to get better and better.”

Jackson is two matches away from 500 first-team games.

He has enjoyed the adulation of Charlton’s fans due to his displays in the red-and-white.

And he admits that replacing the buzz of running out onto the Valley pitch as a player will leave a void.

“I’m just starting the coaching and I am really enjoying it – when I do it I feel immersed in it, I don’t feel like I wish I was doing the session. But I don’t think anything will quite replace playing. I don’t see how it can.

“I’m happy to proven wrong. It might well be that I’ll take more satisfaction managing a side to a win. I don’t know that feeling yet. But I’d be surprised if anything beats scoring a winning goal.

“I’ve seen first hand from the gaffer [Robinson] here how difficult it can all be. You pick a starting 11 but then there are seven people left out and then ones who aren’t even in the squad. You have got to manage them and their feelings to keep them onside.

“When you bring players off they can get the hump. I’ve been there – you think you are doing alright and your number comes up. That side of it makes it a tough game.

“I’ve been quite lucky for most part of my Charlton career. If I wasn’t playing it was usually because I had an injury. In the last couple of years I’ve been  a bit more in and out. I’ve had confrontations with managers – all of them.

“When Powelly [Chris Powell] first dropped me I didn’t take it very well at all, not at all. In fact I apologised to him recently when I saw him about the way I dealt with that. I’ve started looking at it from a coach’s point of view.

“I never thought I was undroppable, by the way. But if I felt like I should be playing  or it was unjust then I didn’t deal with it very well.

“That is why I apologised. I probably behaved like a bit of a baby and sulked a bit. He let me have a day of that and then said ‘that’s it, I need you back at it’. I thought it was good management, the way he dealt with it.

“He probably wanted a reaction, but the one he got wasn’t great. He could’ve gone the other way and got the right hump himself.

“That’s just the way I am. I love playing football and want to play every game. I’m better now. I know if everyone is fit then I should be nowhere near it, I get that.

“I’ve got to find something else to focus that bit of me on. It is not going to go away – I need to feed it somehow. That’s probably why a lot of footballers struggle.”

One option could be marathon running, provided Jackson’s workload is not majorly increased in the summer.

“I need something fitness wise and with a goal to aim for,” he said. “My dad did the marathon years ago and it is something I have wanted to do when I retire.”