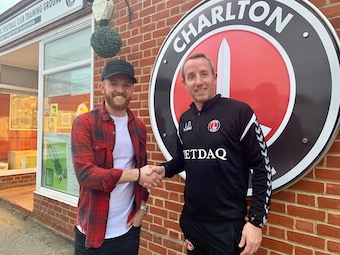 New signing Jonny Williams reckons Charlton Athletic should be in the Championship – as a minimum.

The Welsh international joined the Addicks on a permanent basis from Crystal Palace on Friday morning.

Williams is available to play in today’s match against Sunderland. He spent the second half of last season on loan with the Black Cats, who were relegated from the Championship.

We exclusively revealed that the attacking midfielder was in the crowd for last weekend’s home win over Walsall.

Williams told the club’s website: “I came to the game the other day and I thought the boys did really well. They are a good talented bunch of players. I’m hopeful to add to that and I’m excited to work with them and hopefully get the club back in the Championship, which is the main aim.

“I thought it [The Valley] was brilliant. I thought the atmosphere was really good. You can tell they deserve to be in the Championship. It’s a Premier League team at the end of the day that shouldn’t be in this league and I need to do my best on the pitch to hopefully get the club back to where it belongs.”