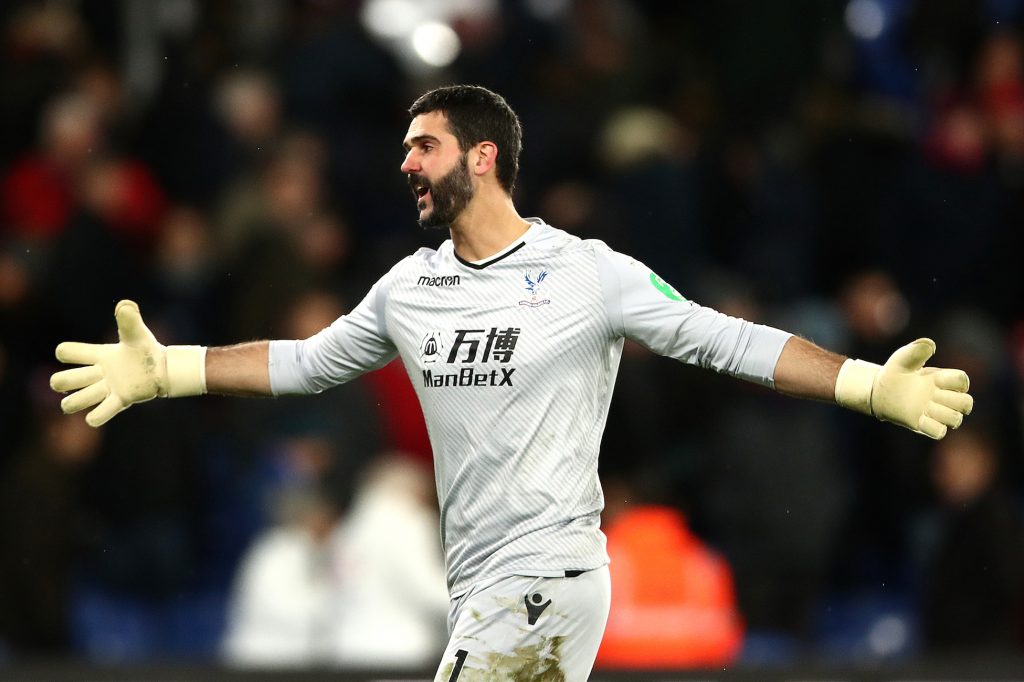 The beard may be flecked with grey and the ponytail a distant memory – but some things don’t change when it comes to Julian Speroni.

The Crystal Palace legend achieved another mini-milestone on Tuesday night as he made his 400th appearance for the club.

And Speroni, as so often has been the case over the past 13 years since he joined the South Londoners from Dundee, was on hand to make a crucial save in the 1-0 win over Watford.

His stop from Richarlison prevented the Hornets going 2-0 up. Palace – already plodding – would have been unlikely to turn the contest around. Instead late finishes from Bakary Sako and James McArthur flipped the outcome on its head.

“It was an important moment, if you go 2-0 down it becomes a massive mountain to climb,” said Speroni of his block on Richarlison’s effort.

“I’m just pleased that maybe one save can help the team achieve three points. That’s what you’re there for. As a goalkeeper you feel proud when that happens.”

There also must be a sense of pride as he sets new records at Palace. His FA Cup outing at Bolton Wanderers in January was game number 389 in club colours – surpassing John Jackson’s total.

Call it loyalty, patience or stubbornness, but Speroni has stuck out two seasons where he was not regarded as the number one in SE25 by Alan Pardew, Sam Allardyce and Roy Hodgson – at least initially under the latest managerial incumbent.

But he is now on eight Premier League appearances this season after none in the previous campaign and only two in 2015-16.

Many fans have felt he is a stronger option than Wayne Hennessey even if that view has not been shared by some experienced bosses.

Those that know him well say that he is still one of the fittest, most athletic and strongest players in the squad in testing despite turning 38 in May.

Speroni said: “I’m feeling better and better every game I play. It’s important for a goalkeeper to have continuity.

“I enjoy football, I enjoy playing here and I feel good. I’m going to try and play as many games as I can. I feel fit – why not?

“Playing 400 games is not something you think you will achieve, especially when I first came to the club. The fact I’m here today is amazing – 400 is a big number.

“It’s an honour to be here, a privilege to play for this club and long may it continue.

“I was so focused on the game, because it was very important for us, that I didn’t really think much about the 400. I was just on the job we needed to perform.”

Speroni has been there through the highs at Crystal Palace in recent years and played his own role in them winning previous relegation battles.

The fightback against Watford felt like a notable moment for Roy Hodgson’s squad, who had been written off by so many after a dreadful start under Frank de Boer.

Speroni said: “This win is huge. Every point is important in this division but to get three is even better.

“We deserved a result like Tuesday a few games ago and we didn’t get it. This was perfect. It shows the character of this team as well – we keep going until the end.

“But so many times before we deserved to win and we ended up with a point – or nothing. Football levels up in the long term. The first half we weren’t at our best but in the second half we controlled it.

“We take it. In this situation you need to get as many points as you can, as quickly as you can.”

Palace climbed out of the bottom three on Tuesday night. It is the first time all season they have managed the feat.

Not that Speroni is paying any attention.

“We can’t keep looking at the table now. We need to focus on gaining points and look at it a little later.

“It changes all the time. You get a draw, another team wins and all of a sudden you’re back where you were before.

“You can’t be too worried about the table. We need to worry about the performances. They’ve been good.

“Even when we didn’t get the result we deserved we were still positive and confident. We haven’t done anything yet. We have to keep working in the same way and see what happens. We can’t really relax and say we have won and have a bit of a margin – it’s not like that. We need to keep the foot down because this league can punish you very, very badly.”