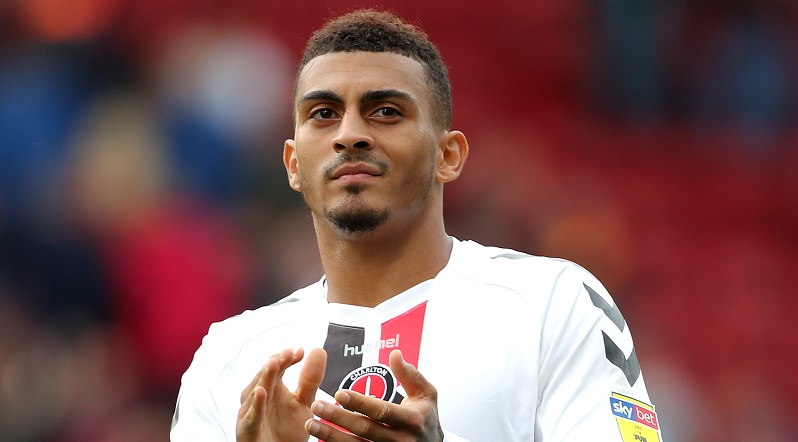 Charlton Athletic Sport
28 September 2018 Richard Cawley 0 Comments
BY RICHARD CAWLEY
[email protected] Karlan Grant has no plans to quit Charlton Athletic in the summer – admitting he is loving life under Lee Bowyer.
Addicks boss Bowyer revealed earlier this week that contract negotiations had kicked off with the 21-year-old striker, who has scored five goals in nine League One outings this season.
And Grant, whose current terms only run until the end of June, is not eyeing the SE7 exit door.
“We’re in talks,” he said. “I had a conversation with him [Bowyer] and my agent the other day. I’ve been here so many years now and I’m happy and enjoying my football.
“It is good to be rewarded with that [a new contract]. We’ll see what happens.”
Grant’s impact at Charlton could have come earlier if Bowyer had been able to utilise the attacker in the play-offs last season.

But the Greenwich-born forward was unable to feature due to his loan arrangement at Crawley Town, where he had hit nine goals in 15 matches.

This season has seen the former England U19 international picked ahead of more seasoned strikers such as Nicky Ajose and Igor Vetokele.
“I knew he [Bowyer] wanted to put me around the squad because he called me when I was on loan at Crawley and talked about maybe getting me back,” said Grant. “It wasn’t possible because my loan had been extended.
“I knew he had eyes on me from then. I just had to bide my time, come back in the summer and work hard.”
Grant made his debut at the age of 17, just after signing a three-year contract, but found opportunities hard to come by.

Tomorrow’s trip to Luton will be his 40th League One appearance – he has played every minute this season for the Addicks.

As well as being joint-top of the club’s goal charts with Lyle Taylor, he has also produced three assists.
“I haven’t applied as much pressure on myself as I did before,” said the academy product. “I’ve tried to enjoy games more and things have come more naturally.
“When you haven’t been scoring you start to question yourself: ‘Are you ever going to score?’ But then again, I wasn’t getting the minutes. Now I feel like I will keep scoring.”
Asked about taking time to find his first-team feet, Grant replied: “It is down to me – I’m the player on the pitch.
“I was young. And there were a lot of managers. Bob Peeters gave me my debut and that gives you confidence but then you get a new manager [Guy Luzon] and he wanted to go with experience. Then you’re not developing so much – I was in and out of the U23s and first team.
“I never really played many games and that kills you. When I was playing in the youth team you feel like one of the main people because I scored 20-odd goals for the U18s.
Going into the first-team means you have to start again, it is a bit difficult in that sense because you are a small fish in a big pond.
“It was a bit of a slow-burner for me. But I always believed I would do it. Hopefully this is my time.”
Peeters, Luzon, Karel Fraeye, Jose Riga, Russell Slade, Karl Robinson and Bowyer – Grant has already played under a hefty haul of managers in SE7.
So where does the current incumbent rank?
“Definitely up there and probably number one. He is always trying to improve me – it’s not like he is playing me and leaving me to it,” said Grant.
“On Saturday I felt a bit in my quad and told him I was struggling but he said: ‘Come on, you’ll get a goal’. And I did.
He has got faith in me and I can’t thank him enough for that.”
Grant and Taylor have hit it off as a pairing. He said: “We’ve got a good relationship and it would be harder if we didn’t and we had to play together.
“I try and find him as much as possible. On Saturday I maybe could’ve squared it to him but I didn’t see him – if I had then I would have squared it, 100 per cent.
“We defo get along. If he comes short I try and make the run in behind and vice-versa.” Grant is confident of team success.
“The target is definitely promotion. We had a shaky start but only had about 12 players then – everyone was tired in the first and second game.
“Now everyone is starting to get match fit. We’ve got players who can do different things. No-one has dominated us.”