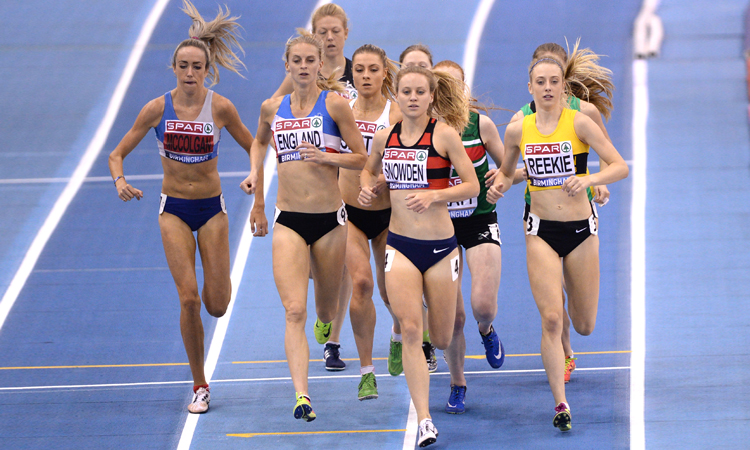 Katie Snowden has set her sights on reaching the 1,500 metres final as she gears up for a senior Commonwealth Games debut.

The Herne Hill Harriers star, 23, will be in the heats on April 9 at Queensland’s Carrara Stadium.

It was only about 18 months ago that Balham-raised Snowden, who has been with the South London club since the age of 12, concentrated on the 1,500m distance with new coach Rob Denmark.

“I feel at least I want to qualify for the final,” said Snowden. “Once I have done that then anything can happen. Realistically I’d like to come in the top six or eight, that would be good.”

Snowden flew out to Australia three weeks before the competition got underway to a holding camp in Brisbane.

Her training regime is a tough one.

“I’m sure some girls don’t do as high mileage but also there will be girls who run even more, 85 or 90 miles a week.

“It [1,500m] doesn’t sound very far but you have to be so strong to run it well. Sadly that requires doing a lot of running!

“I’m training pretty much every day. I started doing quite a bit of altitude training and went to South Africa for most of January as part of my preparation for the Commonwealth Games. When I go to Australia they are coming to the end of their summer but it will be a lot hotter than racing here. It was really hot in South Africa, a high 30 degrees.

“With altitude training there is less oxygen, so it makes it a bit harder – especially recovery-wise between reps. You find it much harder to get your breath back. Even an easy run feels that much harder. We wear heart-rate monitors and that backs up what I’m saying. I always feel I respond well to altitude training, when I come back. It’s something I’d like to do more in the future and I will do it again before the outdoor season starts.”

That South African trip was funded by British Athletics.

“You have all the support staff out there and it does make a real difference,” said Snowden. “We’re lucky to get the opportunity. Training here recently we’ve had a horrible cold spell and that is hard when you want to do quick speed sessions.”

Snowden gained a geography degree at Nottingham University and is now based in Loughborough.

She occasionally breaks up training by working at Chocolate Alchemy, which is run by Lisa Dobriskey, herself a former GB athlete.

“At the moment running is the priority,” said Snowden. “Maybe next year I will look to balance it a bit more with something else. It’s hard because it does take up so much time. It is ridiculous that you can spend an entire day training.

“I wouldn’t mind getting something part-time but it is hard finding something flexible around my training. That is where Lisa has been so good, she understands. She got in touch and offered me some shifts.”

Snowden was second at the British Athletics Championships in mid-February. She was pipped by Eilish McColgan, the daughter of Scottish running legend Liz.

“Compared to last year it was a really big improvement – to be challenging for podium spots rather than just making up the numbers in the race.”

Snowden won gold over 800m at the Commonwealth Youth Games in 2011. She also finished first in the same discipline at the 2015 England Athletics U20/U23 Championships.

“I want to be challenging a bit more for medals,” she said. “But it is tough at senior levels, there are a lot of good runners around – especially at 1,500m. It makes it quite hard just to get in the competition in the first place.”

The longer term plan is to pull on that GB vest at the 2020 Olympics in Tokyo.

“I’ve only just gone on British Athletics funding but fingers crossed that is what everything is geared towards,” said Snowden. “It will be incredibly hard to make it.

“I still speak to my coach about the fact that I feel there is room for improvement at 800m, so it is whether I stick at 1,500m. Currently at 1,500m you have Jessica Judd, Laura Weightman and Laura Muir. They are the three best distance runners in Britain and there are only three spots.”

So how will Snowden feel when she gets on the starting line at the Commonwealth Games?

“It will be nerve-wracking but also having done the junior one I know it will be a great experience.

“I know what to expect, even if it is at a higher level.

“My parents and sister are coming out. It is nice for them to try and make a bit of a trip out of it. They don’t tend to travel too much. They can go off and have a bit of a holiday.”

For Snowden, the real hard graft is about to start.