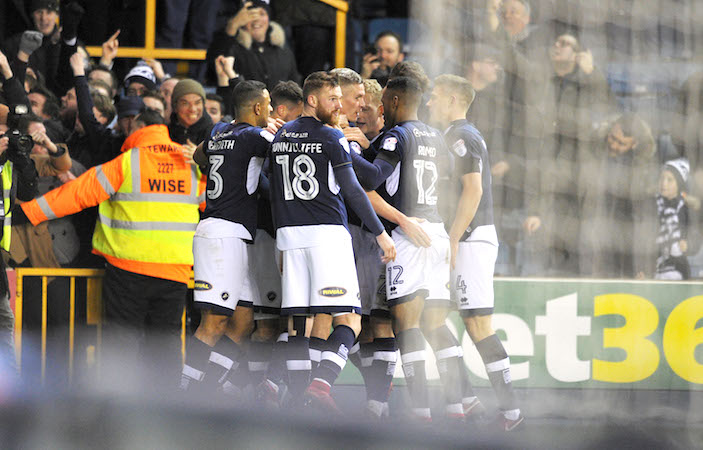 Millwall Sport
13 February 201813 February 2018 Richard Cawley 0 Comments
MILLWALL 1
Gregory 40
CARDIFF CITY 1
Hoilett 3
BY RICHARD CAWLEY AT THE DEN
Referees often get a rough ride at The Den, but Keith Stroud should be high up the popularity charts for Millwall fans.
Last season he made a huge call in favour of the Lions at Charlton in January, ruling that Patrick Bauer had fouled Jordan Archer as he went to boot the ball upfield. Replays showed that there was no contact and that the German defender had simply taking advantage of the keeper’s air-kick to hook home. The derby finished 0-0.
Cardiff City would almost certainly have been winners on Friday night if Stroud had waited a split-second longer instead of whistling just before Sol Bamba hooked home in the 83rd minute.
Instead he gave a free-kick to the Welsh side on the edge of the box after Joe Bennett went down with a head injury following a high arm by Steve Morison.
It was a wrong call by Stroud – at least in the sense of the timing – as he had originally allowed the play to continue.
You could imagine the fourth official – nails sprouting from his mouth – hammering boards across the officials’ dressing room door to keep out a rabid Neil Warnock.  Harris – as he did after the Charlton match – admitted Millwall got lucky on a game-changing decision.
He was also absolutely right in his assessment that the Lions were second-best for the 15 minutes at the beginning and end of a full-blooded clash, but in between played at an excellent intensity.
The home side were forced to defend a spate of corners in the early exchanges and are rarely forced onto the back foot in such a manner at The Den.
But it still took an individual error for Cardiff to go ahead early on. Mahlon Romeo took a risk trying to beat Junior Hoilett – the Lions rarely overplay in their own half – and the attacker won the ball and spanked a low drive past Archer.
But once Millwall got a grip in the contest, they really did dominate. Particularly for around 30 minutes in the second half as City struggled to live with them.
The movement of Lee Gregory and Jed Wallace caused them major problems, the latter popping up all over the pitch in advanced positions.
The pair combined for the Lions’ equaliser, Morison flicking the ball down the right for Wallace to send in a cross which Gregory slammed beyond Neil Etheridge.
That is seven for the season for Gregory, and three of those have come in his last six matches. When you add in the ground he covers, he is another pivotal cog in the way Millwall play.
He was taken off in the closing stages for Tim Cahill and while home fans rose to welcome back one of their most popular players, they quickly moved on to chanting the number nine’s name in recognition of the big shift put in.
Morison volleyed against the crossbar in the first half, doing pretty much everything right as he chested down a Ben Marshall cross.
Etheridge had to get down quickly at his left post to deny Marshall, who enjoyed a bright debut. The on-loan Wolves winger was assigned to corner duties and there were encouraging signs he was on the same wavelength as his new team-mates.
That was typified when Wallace produced a cheeky backheel to him that was returned as a useful throughball, only for a poor first touch squirting the ball too far forward.
Maybe it was the effects of an FA Cup replay at Rochdale in midweek or just the level of effort that Millwall had put in, but Cardiff came on strong in the closing stages.
George Saville needed to clear Callum Paterson’s header off the line.
And Paterson was in on goal when the ball came off Shaun Hutchinson’s heel but he failed to even hit the target as James Meredith applied late but crucial pressure.
“If Timmy scores, we’re on the pitch,” came the chant from home supporters. But the Australian’s only touch was cutting out Sean Morrison’s clearance into touch. At one stage Cahill had a quick glance at the bench to see if he should press Etheridge, who had the ball at his feet, but Harris instructed him to stay back.
A point was still a good result for Millwall – it is another solid step towards safety. Especially when there were at least another couple of penalty calls that could have been given to Cardiff.
Archer caught Paterson as he raced out to fist the ball away when that contentious free-kick – awarded instead of a Bamba goal – looped up off the wall. Hutchinson’s right arm made contact with the ball as he blocked a late shot – the fact it was still positioned by his side aiding his cause.