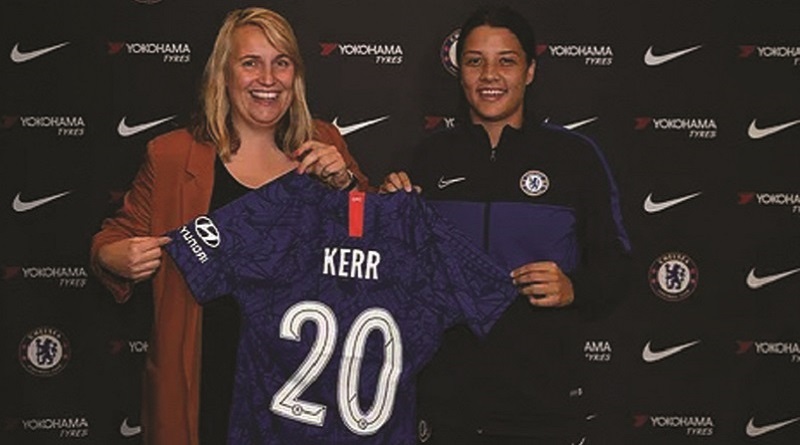 “I’ve come here to score goals, to lift trophies and to hopefully keep my goal-scoring record up,” said Sam Kerr, who signed a two-and-a-half year deal with the Blues yesterday.

Australian striker Kerr will join her new team-mates in January when the transfer window opens.
Kerr, 26, was able to sign for the west Londoners as her contract with her former club Chicago Red Stars ended last month.

She will wear the No 20 shirt, with Jonna Andersson changing to 25.

The number 8 shirt remains vacant, fueling speculation that Hayes will go into the transfer market again in January – this time targeting a midfielder.

Kerr said: “I want team success and I don’t want it to come easy.

“I think Chelsea are one of the biggest clubs in the world – it was an easy decision to make.

“One of the things that drew me to England was the investment in the women’s game and the style of play is a lot different than in the US.

“There will be a lot more football thinking and running for me.

“I feel Chelsea have been building something special over the years and I want to be a part of that – I want to lift some trophies.”

Kerr added, on meeting boss Emma Hayes: “She will challenge me a lot, and hopefully make me a better player.

“She’s all business but can have a laugh too – just like me.”

Hayes said: “Sam has proved time and time again in the NWSL that she is a prolific goalscorer.

She’s won the golden boot many times and she’s a player that can make things happen, but she’s also a fantastic team player.

“The fact she chose Chelsea when she could have gone to any club in the world is a testament to the players and the staff here because she saw this is the best place for her to grow and take the next step in her career. That’s a wonderful compliment to us all.”

Kerr was recently named the NWSL’s Most Valuable Player (MVP) after scoring a record 19 goals in 23 games to secure a third-consecutive golden boot.

This was despite being absent for part of the season because of this summer’s World Cup.

Kerr helped Chicago Red Stars to the NWSL Championship final when she scored the only goal in the play-off semi-final against Portland Thorns.

However, the Australian forward missed out on clinching the title after the Red Stars suffered a defeat to North Carolina Courage.

On the international stage, Kerr made her debut for the Matildas at just 15 and has gone on to score 38 times for her country, including five goals at this year’s World Cup, and she was recently a finalist for the Best Women’s Player at the 2019 FIFA Football Awards as well as being a Ballon d’Or nominee.
Kerr has blistering pace and is skipper of the Australian national team.

She is the all-time leading goalscorer in the W-League with 70 goals and has netted a further 69 in the USA having represented Western New York Flash, Sky Blue FC and Chicago, claiming three golden boots and two MVPs.

Numerous milestones and individual honours have been ticked off, including being the first Australian (male or female) to score a hat-trick at a World Cup, being named as the 2017 Asian Football Confederation’s Women’s Footballer of the Year, and receiving awards for Best International Women’s Footballer and the Best Player in the NWSL at the 2019 ESPY Awards.

How she responds will determine the success of the Blues as they bid to retain their unbeaten status against new outfit United and heap further pressure on chasing Arsenal and Manchester City.

Chelsea are top of the WSL1 and face Manchester United on Sunday at home at Kingsmeadow.

Kick-off is 2pm. Some tickets are still available. Go to www.chelseafc.com