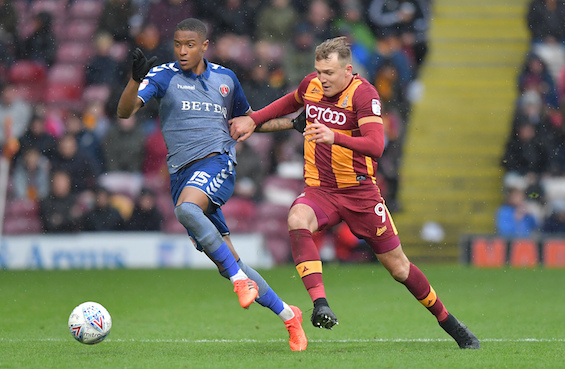 Riding out some filthy weather in West Yorkshire while absorbing an increasingly desperate late onslaught from their hosts, Charlton were deserving conquerors of fellow promotion contenders Bradford City.

A whistle-to-whistle performance, to which every player contributed, not only warmed the cockles of 624 travelling hearts but confirmed that their team has what it takes to go the distance.

Charlton’s satisying victory was essentially an ensemble composition that featured occasional solos from gifted virtuosos, none more outstanding than goalkeeper Ben Amos, who produced two incredible saves in added time when his side came close to capsizing.

There was also convincing evidence that manager Karl Robinson, who orchestrated their triumph, is confident enough to make important calls under pressure. His minor tweaks of the side that battled to a useful 1-1 midweek draw at Oxford were risky but inspired. His decision to recall ex-Bantam Billy Clarke to replace Ben Reeves seemed routine enough; the benching of brilliant left-back Jay Dasilva was rather more problematic because the Chelsea loanee has been in fine form.

Fearful that unsophisticated City would aerially overpower the diminutive defender, Robinson chose Ezri Konsa at centre-back and detailed massive Naby Sarr to offset the height imbalance at left-back. He was rewarded for his boldness by Sarr’s responsible display, which eschewed his usual repertoire of flicks and tricks in favour of resolute, unshowy defending.

More than once, the huge Frenchman’s heading ability got the Addicks out of trouble which the extravagantly talented Dasilva would have found difficult to handle.

Tigerish in the tackle, relentless in their pressing tactics which began with Josh Magennis’ tireless hassling up front and spread throughout a committed side, disciplined and organised, the Londoners – no Southern softies these – wore Bradford down before applying the coup-de-grace with less than a quarter hour remaining. They then fought tooth-and-nail to hold on to their lead, to which end they were hugely indebted to Amos’ added time heroics.

Making himself big as Bantams top-scorer Charlie Wyke met Omari Patrick’s cross at point-blank range, Amos somehow blocked the sure thing with what appeared to be a combination of upper arm and chest.

He was immediately called back into action to deny home skipper Matthew Kilgallon, who looked certain to equalise when he bulleted Alex Gilliead’s centre goalward from no more than four yards until Amos again conjured the ball over the bar to safety. Not without reason did Sarr point meaningfully to his marvellous goalkeeper as they celebrated together with their rain-sodden fans at the final whistle. These were saves of the highest quality and Amos deserved to occupy centre stage.

Sharpshooting Tarique Fosu, meanwhile, has been responsible for six of the seven goals which earned Charlton eight points from their four previous games to keep them in the play-off spots and in reasonable touch with pace-setting Shrewsbury Town and Wigan Athletic at the top of League One.

Fosu didn’t add to his total at Valley Parade but he played a significant part in the game’s only goal, opportunistically claimed by Jake Forster-Caskey. Picked out at the far post by Chris Solly’s perfect cross from the right byline, the slim winger’s volley wasn’t cleanly struck and was heading wide until Forster-Caskey arrived to finish emphatically a mere yard short of the goalline.

It was a lead which Robinson’s so-solid crew had no intention of surrendering.

Among the many heroes who stood up to be counted in the soggy West Riding, combative defensive shield Ahmed Kashi was particularly impressive. The perpetual motion Algerian was everywhere at once, a bundle of energy who snapped into challenges, used a formidable football brain to make interceptions and constantly disrupted City’s attacking plans.

Kashi was not easily dismissed as mere destroyer, however, not while his calm distribution consistently catapulted Charlton from stubborn defence into exuberant, menacing counter-attack. The January transfer window will be an anxious time for Robinson, if this savvy all-rounder stays healthy and continues to shine.

Elsewhere, his steadily improving team seem equipped to sustain their promotion push. There will be setbacks, of course – Saturday’s visit from last season’s nemesis AFC Wimbledon provides pause for thought – but there’s nothing in League One to make them unduly nervous. Carpe diem and all that. And that diem can’t come soon enough.

After a few seasons of languishing, you can easily become institutionalised in League One. For Charlton, there’s no time like the present.