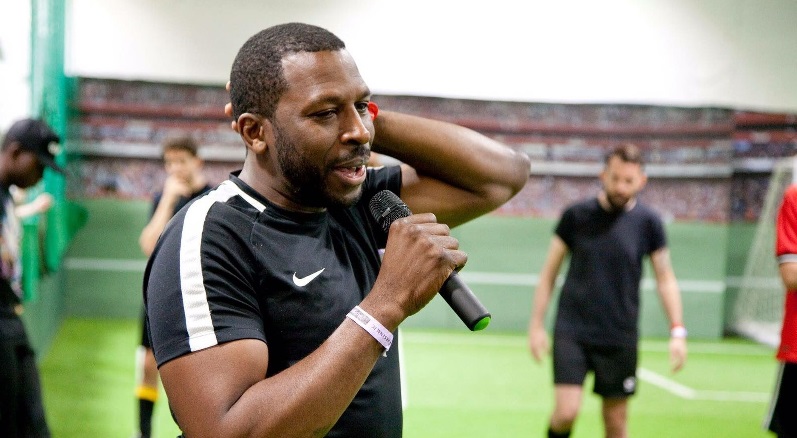 Rasheed Alawiye saw stabbings every week as a police officer in South London.

The 43-year-old said: “We have doctors saying that they have kids coming in to hospitals with the type of injuries you’d find on a battlefield. Anyone can see that is not right.

“There must be something wrong with our society if these youngsters think it is okay to go out with a blade. “Where are their heads at, when they think it is acceptable to plunge a knife into someone?

“If you think too deeply you can get depressed, but I’d rather do something positive, like a football tournament, to involve people in the issue positively in that way.”

Mr Alawiye, who grew up in the shadow of Grenfell Tower on the White City council estate, in west London is a detective sergeant in the Missing Persons unit in Southwark police.

He said: “Youth crime is an issue that is personal to me. I grew up in inner city London. There was a lot of crime. “I happened to go into a job which was about trying to fight that element of society.

“The sort of weapons we have seen in Southwark are shocking. It’s prevalent. There are stabbings on a weekly basis. They often don’t get reported in the mainstream media.”

Southwark, along with Newham, had the highest number of knife crimes recorded in London last year, according to Met police figures.

There were between 700 and 850 knife crime or sharp instrument incidents in Southwark in the 12 months leading up to January 2018. This averages out to almost three incidents a day. Mr Alawiye said: “It’s important to educate youngsters, give them role models and get them involved in more positive projects.

Give them a vision of the world which is more positive and structured and not centered around youth violence.

“This football tournament isn’t going to solve the problem by a long shot, but it keeps the dialogue going.

“Rugby and football were massive things in my life growing up. It taught me discipline. It used energy and burnt off testosterone.

Sport is such a uniting thing as well.” This is the second year Mr Alawiye has run a charity football tournament with Arsenal.

His first event was organised in response to the Grenfell tragedy.

“I have family who live under the tower,” he said. “This was just a way of doing something to help.”

They raised close to £4,000 for the Clement James Centre, a charity supporting Grenfell families.

Mr Alawiye said: “We had families from the tower come to speak to us before. It was a positive community event.

“With the Kicks Not Flicks tournament, I want to keep that momentum going.”

A group of kids played a game before the adult five-a-side tournament kicked off at Arsenal’s Community Hub ground on Sunday, July 28.

A Just Giving page has been set up with a target to raise £1,500 for the Ben Kinsella Trust which works to raise public awareness of knife-crime and build youth centres.

To donate to the just giving page go to www.justgiving.com/fundraising/kicksnotflicks.