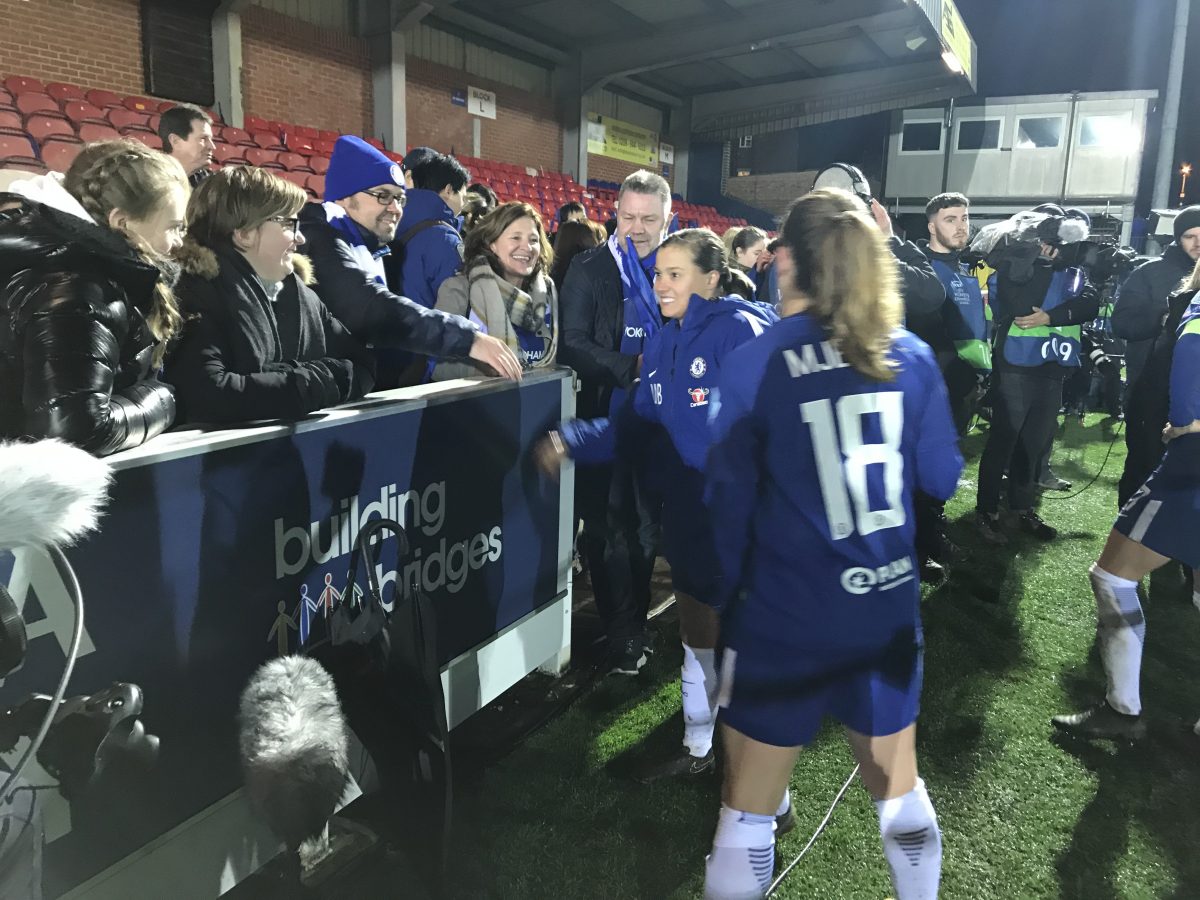 ‘Mini Messi’ Fran Kirby scored twice as Chelsea blasted their way into an historic semi-final of the Champions League with a pulsating 3-1 win, at Kingsmeadow tonight against a talented Montpellier side.
Chelsea held a 2-0 advantage from the first leg last week and made certain of their dominance when striker Kirby hit an early opener.
The French side showed their undoubted class and ability to haul themselves back into the game, but when Ramona Bachmann struck early in the second half, it all but demoralised the visitors.
Kirby got her second from the spot kick to seal an emphatic victory where they will face their nemesis of past campaigns Wolfsburg.

Super Fran Kirby struck a blow to the French visitors after just three minutes when she broke free, cut through the heart of the Montpellier defence and swiftly crashed home a fierce, low left footer past Casey Murphy, the Montpellier goalkeeper.
That put the Blues 3-0 up on aggregate.
Sandie Toletti tried her hand at a volley on 14 minutes, but her effort, while with power, was off target, giving Hedvig Lindahl no problems.
Valerie Gauvin saw her daisy-cutter inch past Lindhal’s right post as the Blues, happy to counter-attack, allowed Montpellier to inch close to their penalty area on one too many occasions.
Lindahl denied Gauvin again on 24 minutes, diving low to meet the powerful, goal-bound header.
A wonder strike or was it a cross by Sofia Jakobsson, levelled the scores at Kingsmeadow, and in truth, was no more than the French side deserved.
Lindahl was caught on her heels, but the deft effort sailed over her and the ball nestled into the back of the net.
There were no changes by either side at half-time.
Within four minutes of the restart, the Blues restored their lead.
Excellent play by Kirby set Ramona Bachmann free on the left. She took two touches before planting the ball wide of Murphy.
Spence was just a header away from increasing the lead after Millie Bright sent in a brilliant right cross-field ball. But the striker was a tad too late and the ball glanced off her head and away to safety.
That goal however knocked the stuffing out of the French side. They took a while to recover and went on the offensive again.
Chelsea boss Emma Hayes replaced Drew Spence, with Scotland star Erin Cuthbert taking her place on 72 minutes.
The Blues booked their place in the semi-finals when So-yun Ji went on a mazy run. She skipped past five players before being scythed down in the penalty area.
Up stepped Kirby to stroke the ball home confidently past Murphy to put Chelsea 3-1 up and 5-1 on aggregate.
Game over
Chelsea: Lindahl, Thorisdottir, Blundell, Bright, Ji, Kirby, Ericsson, Chapman, Bachmann, Spence
Mjelde
Subs: Telford, Flaherty, Davison, Aluko, Rafferty, Cuthbert Bailey
he far corner of her net.