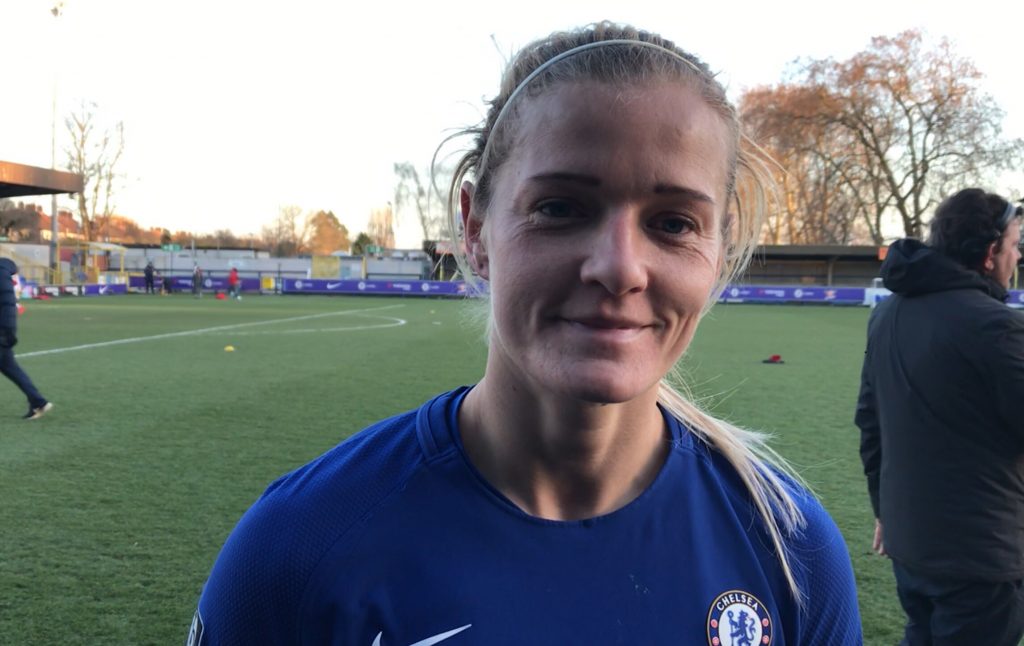 Katie Chapman, Chelsea’s skipper oversaw a scrappy win over derby rivals Arsenal this afternoon, coming out 3-2 winners at home in the WSL 1 encounter.

It was a game for the spectators I think,” she said.
“There wasn’t a great goal among them. But it was a derby and every game we play against Arsenal, it ends up like this.
“I think whoever was the most resilient, would come out on top.
“The wind and the sun played a factor in the game. It’s hard to play in the wind. the conditions and the fact it was a derby game always meant it was going to be end to end.
It wasn’t a great performance and there was a long break between games, so was it a wake-up call for the Blues, especially as Manchester City come calling next weekend in the Continental Tyres cup semi-final?
The Chelsea skipper said: “We have been back in training and training hard.
“We were ready for the game. Arsenal know we are the team to beat and always pick their game up when they play us.”
Were Chelsea lucky to get all three points?
Chapman said: “Well, we did get the three points.
“It was hard to judge the flight of the ball in the wind. When it’s in your area, you have to try and go for it. but we came out of the game with the points, so we are happy.”
Debutant Jonna Andersson came off the bench and created the winning goal which saw her byline cross see goalkeeper Sari van Veenendaal knock the ball over her goal line.
Chapman was happy and hope she is credited within the goal: “I’m so pleased for her to score on her debut. She is going to be a great player for us. I think she should claim it. She had the touch. I mean, who can claim any of the goals today. The ball came off the post, did the wind play a part. Did it come off the knee? It was just one of those games.”
The constant stop start of the games this season has not seemingly worried Chapman – she’s used to it.
“The summer season was like that too. We would have a month off for the Euros, then back again.
“We know that’s how it’s going to be and we need to manage that. And we have done really well with that.”
Did the superior experience of Chelsea ultimately see them through?
“I think it was experience. We have got a great team there. We do everything together. We work hard as a team and we believe in each other.
“Against Arsenal, we knew that our performance wasn’t good enough, but occasionally you have to scrap it out to get a result. I think we have proved that and can go on to be winners.”