A bitterly contested land regeneration project has started its demolition of a garden site in order to build 209 new homes.

The site of the Old Tidemill Garden in Deptford has been selected by Lewisham council to introduce new homes, half of which are intended to be social housing units.

After the council’s decision to build on the site, protesters occupied the space for three months before being evicted by the police and enforcement officers.

Protesters were back at the beginning of the demolition, with two of them arrested for blocking the tree feller’s access to the site. Spokeswoman for the campaign group Save Tidemill, Save Reginald.

They have felled most of the trees which was heartbreaking to watch as the birds have begun their nesting season and when they chopped the trees down the birds didn’t know where to go.

“The whole place looks like a war zone now, it feels very spiteful.” Another protester, Anne Caron-Delion, 55, from Deptford, said: “I think it’s incredibly sad, it took 25 years to build this garden and it has been destroyed in three to four hours. 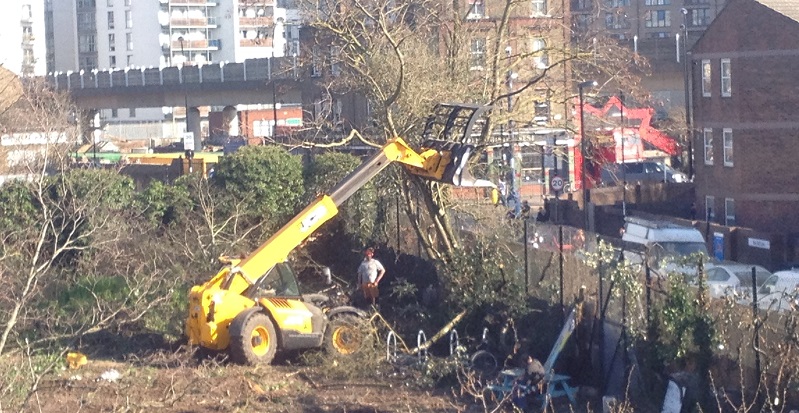 “It’s the one piece of wildlife in the heart of Deptford. All of us were watching in tears.”

Councillor Paul Bell, cabinet member for housing, said: ‘The 104 additional social homes on the Tidemill development are desperately needed for people who have been on our housing waiting list for far too long.

“This scheme is a key part of our commitment to tackle the housing crisis in Lewisham. “The Tidemill development has been scrutinised since 2016.

“It’s been through a large number of consultations, stringent planning processes and the legal system several times. We have come to the end of what has been a long and thorough approval process, and we now need to move forward.

“For every day there is a delay to this scheme, an individual or family has to wait another day for a secure, permanent home of their own.

We need to start building these social homes local people so vitally need. I appreciate some residents have had concerns about this development.

“We have worked hard to reassure them that, in our commitment to provide these social homes, we will continue to work with them and the community to deliver a scheme that will provide huge benefits for local people.”