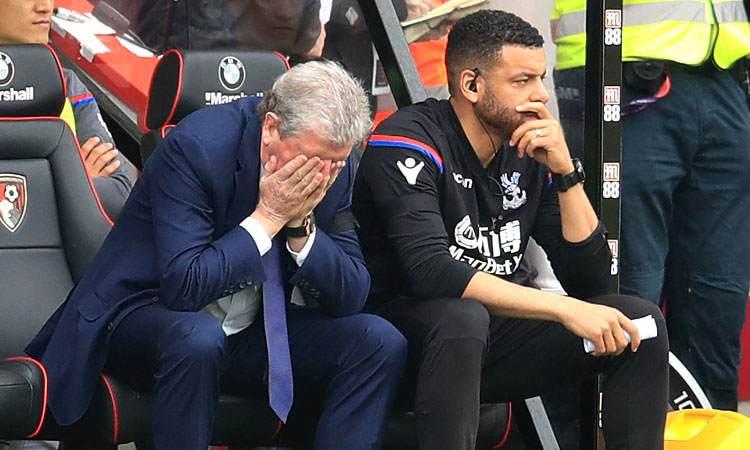 By Matt Woosnam at Vitality Stadium

Conceding late goals is becoming a theme for Crystal Palace, and unless they urgently rectify the problem they will succumb to relegation.

A 3-2 defeat by Manchester United at home came courtesy of Nemanja Matic’s goal in the first minute of stoppage time and followed an 88th-minute Harry Kane winner in the 1-0 defeat by Tottenham. In both of those games, Palace had done enough to take at least a point. In the case of the United game, they perhaps deserved all three, but late goals were their undoing.

Bournemouth’s 89th-minute equaliser at the Vitality Stadium on Saturday was yet again indicative of this trend.

Palace had taken the lead through Luka Milivojevic’s stunning free-kick just two minutes into the second half, which made him the first Palace midfielder to reach double figures in scoring terms in the Premier League. Yohan Cabaye was felled on the edge of the box and the Serbian stepped up to curl into the top corner.

Another concern for Palace is Roy Hodgson’s continued reluctance to make substitutions, or at least effective substitutions. Seldom has the former England boss made an unenforced change since his arrival, and it too is costing points.

It was ironic then, that both of the Cherries’ replacements – Lys Mousset and Joshua King – were the ones who found the back of the net.

James Tomkins failed to adequately clear a cross and his header landed at the feet of Mousset who shaped his body perfectly to lash past Wayne Hennessey for the first equaliser.

Wilfried Zaha would then produce a moment of magic, with some superb skill to remove Ryan Fraser from the equation and slam a shot into the back of the net courtesy of a deflection via Steve Cook.
But Bournemouth came at Palace late on. Mamadou Sakho turned the ball behind for a corner, only to see Aaron Wan-Bissaka lose King at the back post as the Norwegian tucked home from close range.

The Eagles had Jairo Riedewald, Martin Kelly and Timothy Fosu-Mensah on the bench, and it would have made sense to introduce at least one of them considering Cabaye struggles to complete a full 90 minutes, Ruben Loftus-Cheek has just returned from a long-term injury, Mamadou Sakho is not fully fit, and it is apparent Zaha still nurses an injury himself. In truth it is just one factor amongst many which have left the Eagles struggling to pick up points despite playing well.

Wan-Bissaka is young and still learning at this level, but it was his error which allowed King to steal in for the second equaliser. Marking at set pieces is an area of his game which urgently needs improvement, but his errors do not mean he is not capable of playing in the Premier League, and there is no better way to gain experience than by doing so against the best teams in the country.

An inability to finish has also cost Palace dear this campaign, particularly in recent weeks. Patrick van Aanholt found himself with ample time to decide on his course of action following a quick throw from Hennessey and a cross from Zaha, only to shoot straight at Asmir Begovic. Zaha saw a shot from the edge of the box well saved, but Townsend should have done better when Nathan Ake’s poor pass fell to him near the penalty area, but a wayward first touch took him away from goal and Ake recovered quickly.

It would be harsh to besmirch Hodgson too severely, for he has seen his side hampered by injuries and key players not performing when it matters, but the three main causes of this failure to win have been consistent themes in Palace’s season.

With five games remaining, this point means that they must rely on Southampton to slip up with their game in hand to definitely have the chance for Premier League safety in their own hands still.