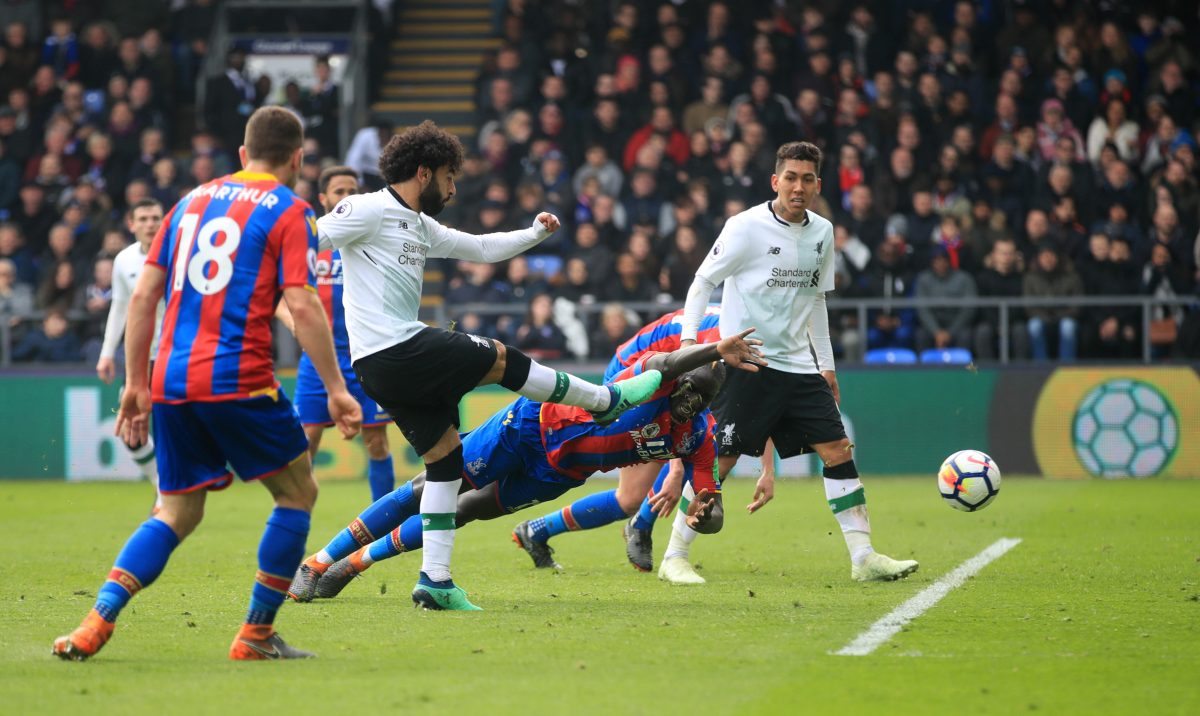 Mohamed Salah condemned Palace to yet another late defeat as Liverpool won 2-1 at Selhurst Park.

Luka Milivojevic had given the Eagles the lead with an early penalty, but a second half goal from Sadio Mane and Salah’s strike with just six minutes remaining means Palace have now lost six of the last seven Premier League games.

An exciting opening 10 minutes began when Wilfried Zaha forced Loris Karius into an excellent save. The winger was put through on goal by a wonderful diagonal pass from Yohan Cabaye but, having possibly handled the ball, saw his effort thwarted by the German goalkeeper as he flicked the ball goalwards.

Mane then headed a goal-bound Virgil van Dijk effort wide before the Eagles were given the chance to take the lead when Zaha was clumsily brought down in the penalty area by the onrushing Karius after just 10 minutes – giving referee Neil Swarbrick no option but to award the hosts a penalty.

Milivojevic emphatically dispatched the spot-kick, diverting the ball into the left-hand corner as Karius dived the other way. It was the Serbian’s ninth goal of a surprisingly prolific season, albeit seven have come from the penalty spot.

Palace coped with Liverpool’s attacking threat very well in the first half. The South Londoners set up in a 4-5-1 formation and defended deep when the Reds had the ball, limiting space in midfield and behind the back four. Liverpool’s notorious front three were prevented sufficient space to cause the Eagles problems and they were restricted to tame efforts at Wayne Hennessey

Liverpool’s frustration was epitomised when Mane seemed to have equalised having headed Joel Matip’s flick-on beyond Hennessey, only for the Senegalese forward to have his celebrations prematurely ceased by the assistant referee’s flag. Mane was also booked for simulation slightly prior to having his goal disallowed for offside and was largely kept quiet by the once again impressive Aaron Wan-Bissaka.

The Reds’ primary threat came from set-pieces and Hennessey – making his 100th Palace appearance – was forced into a fantastic save by Mane, having to react quickly to dive low to his right to tip away the striker’s flicked near-post header.

Liverpool vastly improved in the second period and eventually equalised three minutes into the half. A patient and well-worked routine saw the Reds move the ball around the penalty area before James Milner was freed on the left and his low cross was flicked into the net from six yards by the unmarked Mane.

Christian Benteke’s woes in front of goal continued as he missed two good chances to extend Palace’s lead. He first capitalised on a defensive error but scuffed his effort as he attempted to loft the ball over Karius, before firing over the bar from 15 yards when teed up by Andros Townsend.

Mane was then lucky to escape a second yellow card when he handled the ball just outside the Liverpool penalty area. The resulting free-kick was struck powerfully by Patrick van Aanholt from 25 yards but Karius turned it around the post.

The Eagles became frustrated and began to tire in the in the final 15 minutes, which eventually led to Liverpool snatching all three points on 84 minutes. Salah had scarcely been involved for much of the game but just seems to pop up with important goals at good moments, and it was he who controlled an Andy Robertson cross before clinically tucking the ball beyond Hennessey with his 37th goal in all competitions.

Mamadou Sakho joined Benteke up front as the clock ticked into four minutes of added-time, but Palace failed to break down a compact Liverpool defence. Zaha had the best chance to score a late equaliser but his shot was deflected into the hands of Karius.