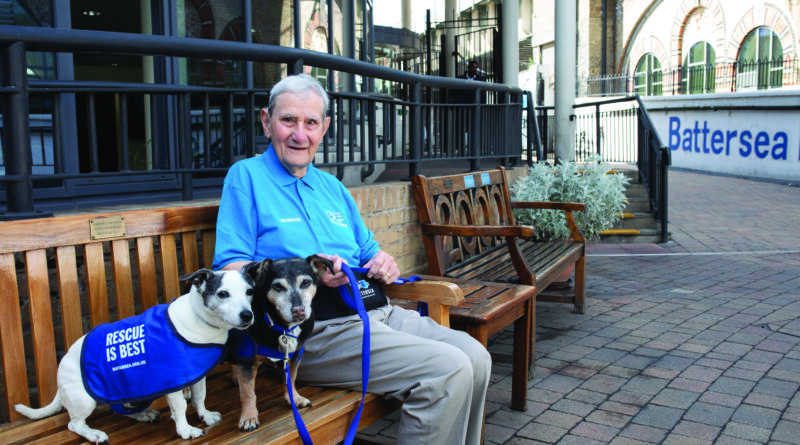 A 92 year old animal welfare charity volunteer is hanging up his lead after 35 years of service to enjoy his second retirement.

Laurence Smith, of West Wickham, Bromley, has volunteered at Battersea Dogs and Cats Home since October 1986, when he started as a dog socialiser, and is the oldest and longest serving volunteer there.

But Mr Smith has decided it is finally time to step back from his volunteering duties. He joined the charity after retiring for the first time from a job in the City of London.

The 92 year old said he started volunteering at the charity because he wanted to spend more time with dogs but couldn’t have one of his own at home in Bromley due to his son’s allergy. Since then, he has given more than 14,000 hours of his time to volunteering at Battersea and was awarded a British Empire Medal in 2014 for voluntary service and his remarkable contribution to animal welfare.

Speaking about his experience volunteering for Battersea, Mr Smith said: “I have really enjoyed my time volunteering at Battersea and my love for dogs and the appreciation from management kept me coming back each week for all these years.

“The friendliness of everyone at Battersea has been the highlight of my volunteering journey and I will really miss it.”

Some of his volunteer work included visiting the Royal Hospital Chelsea with some of the dogs in Battersea’s care to bring smiles and companionship to Chelsea Pensioners.

Since starting his volunteering journey, Mr Smith said he has seen many changes for the better and improved conditions for dogs at the charity and beyond. Of all the dogs he met at Battersea, Laurence fondly remembers Johnny the Lurcher who he walked for 12 months and had a strong relationship with Jack Russell Terriers, Milly and Molly, who he enjoyed taking across to the Royal Hospital Chelsea.

Battersea’s head of volunteering, Charlotte Fielder, said: “Here at Battersea we have been casting our minds back to October 1986 when the world was a very different place.

“The Phantom of the Opera was premiering in London, Prime Minister Margaret Thatcher opened up the last stretch of the M25 and True Blue by Madonna was the No 1 single.

“October 1986 was also the month that Laurence retired from his job in the City of London and started volunteering with Battersea to spend time with dogs.

“During his time at Battersea he made many friends – four legged and two legged and has become the ‘father of Battersea’ much loved and admired by staff and fellow volunteers.

“Laurence is a Battersea hero, and we are so lucky to have enjoyed his company. We wish him all the very best of luck in his second retirement and we will still be keeping in touch. “He will always remain a great friend to Battersea. Thank you, Laurence.”