Residents are taking legal action against the construction of a £5billion super sewer, which they say has made their lives a living hell.

The construction of the 15-mile long drainage tunnel has caused huge noise, vibration and dust problems for more than two years for the residents of the Chambers Wharf estate in Bermondsey.

Gary Kandinsky, a disabled accountant who lives on the estate, is taking legal action against Thames Tideway – based at London Bridge – which is constructing the tunnels.

The sewer should relieve the burden on the capital’s pipe network. But work will soon be done 24-hours-a-day for the next two years, within yards of the highly populated estate, where 70 families live.

Last year residents held a protest after work at the site continued until 2am and a tank leaked, sending dust into homes.

Mr Kandinsky said: “Tideway have become increasingly difficult to work with and blocked our reasonable requests for low-cost holidays and other respite away from the area.

The work will blight our home lives for several more years.”

Lawyers from Lambeth’s Public Interest Law Centre and Southwark Law Centre have agreed to fight for compensation – and the Equality and Human Rights Commission has agreed to back their claim.

This will state that Tideway did not carry out a proper equality impact assessment on the project, as dictated by EU procurement law.

The legal case could highlight whether a full equality impact assessment should have taken place, before the work began, to protect vulnerable members of the community.

Mr Kandinsky said: “Lorries come and go on the site from 7am-2pm. Floodlights shine into people’s bedrooms. The ground shakes all the time. There is so much dust sometimes it looks like a beach.

“Last summer, in the intense heat, we had to keep our windows closed, which made it impossible to sleep.

“Tideway claims the materials are safe but has installed £500 hypo-allergenic filters in some homes – so is it safe or not? People are demanding them because their health is worsening.

“Some residents have been moved away into temporary accommodation – a sign that the pollution might be unsafe.

“We believe we have a good claim that they have breached their public sector equality duty. I believe we can get to court, we will be successful and prove that they should have carried out an equality impact assessment.

“We are questioning the way vulnerable people in these blocks have been treated – single mums with young kids breathing in this much all day, people who already had long-standing mental health problems or drugs dependency or have been decamped from the Aylesbury Estate.

“Tideway were helpful at first but now seem to just want us to go away. “Those who can shout loud enough have managed to get compensation but those who did not hear about that scheme until much later got a lot less – and that tended to be more vulnerable families, for example addicts who live in a haze or those for whom English is a second language.

“We think a judge would make them do one – and that would mean extra resources for the project and justifying what they have done.

“Compensation would not have made a huge difference to them but it would have bought them a cup of tea or a trip to the zoo.

“I have a form of paralysis and fatigue but am quite pushy. Other people have had nothing but are not able to fight back.” 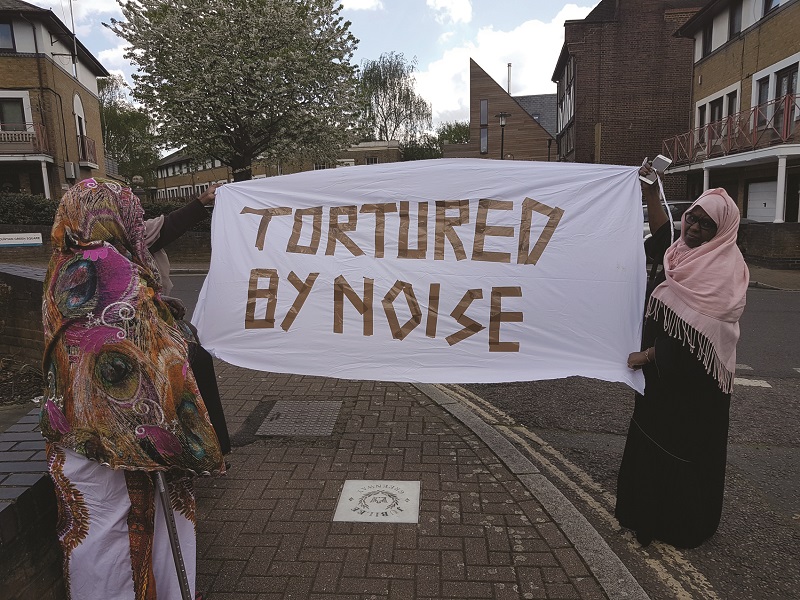 There are claims of older people having to be taken to hospital, other residents hyperventilating and a dog having to be put down because of the dust.

An “acoustic shed” has been built to reduce noise from the construction site – but paperwork from an independent compensation panel has revealed it doesn’t work as well as intended.

The report from the meeting says: “The Panel is surprised to see that [contractors] CVB’s section 61 application dated April 27, 2018 indicates the reduction in noise following the completion of the acoustic shed is not predicted to be materially significantly lower than before the acoustic shed is erected.”

Mr Kandinsky said: “What sort of shed to block noise is open at one end?”

Isaac Muyiwa-Ojo and his wife Vanessa had no option but to request temporary accommodation after the construction caused issues for their health and wellbeing.

Mr Muyiwa-Ojo, who at least once had to be rushed to hospital with breathing difficulties, said: “This went a long way to cripple the happiness that we derive from each other.

“The building and amendments to the so-called ‘acoustic shed’ has gone ahead to destroy the peace, health, tranquillity, happiness and the beautiful scenery that residents here have known for some 28 years in this location.

“We fervently hope that the law helps us to look critically at the plight, and rescue of the innocent, poor and heavily pulverised residents.”

The 25km tunnel will run under the tidal section of the Thames to capture, store and transport raw sewage and rainwater discharge.

Hammersmith & Fulham council made a legal challenge to build it, saying residents in another drilling site in Fulham – but ministers Eric Pickles and Liz Truss said it was the only way to stop raw sewage leaking into the Thames from London’s overused pipe network.

Southwark Law Centre chief executive Sally Causer said: “I can’t imagine what it must be like to experience the noise and vibration all day and into the night.

“Decision-making on the mitigation offered is far from transparent and the appeal process seems to be another barrier for vulnerable residents.”

A Tideway spokeswoman said: “Tideway is committed to doing as much as we can to limit the impact of our works on people who live and work near our sites.

“This has included using specialist equipment to reduce the levels of noise during construction, keeping lorries off the roads by transporting materials by river, and building a noise and dust enclosure which will house a large proportion of the work.

“Robust and detailed impact assessments were carried about before work started, as is usual with any major project and we continue to have regular dialogue with the community.

“Whilst we cannot comment on individual cases we would encourage any residents who feel affected by our works to contact us.”