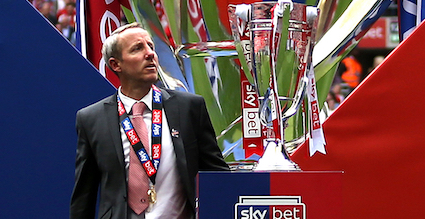 Lee Bowyer is expecting further discussions over his Charlton Athletic future by the start of next week – but said his phone would be off for the rest of today after the club’s League One play-off final win.

The Addicks are back in the Championship after a 2-1 victory over Sunderland at Wembley.

Bowyer has got the South London club up without spending a penny on transfer fees.

And the Addicks chief revealed he had contact with owner Roland Duchatelet on Saturday.

The initial offer from the Belgian tycoon in the closing weeks of the League One campaign was described as “incentive-based” by Bowyer.

“I spoke to the owner yesterday, he rang me to wish us luck for today,” said Bowyer. “And then he said we would speak very soon – after the weekend… as my phone will be off tonight.

“But I’m sure he’ll probably call me over the next couple of days, I’ve no doubt.

“That was an achievement last week, when we played against Doncaster at The Valley. And this is a massive achievement. But whatever happens with me, will happen. I can’t control that, like a lot of things I can’t control.

Patrick Bauer and Joe Aribo are also out of contract this summer.

“We can go to Pat now and offer Pat a contract,” said Bowyer. “Because we had to get promotion to be able to even talk to Pat, because he was 100 per cent going to go to the Championship.

“We knew that. So that’s someone we need to speak to.

“Joe Aribo, I’m hoping that he will now sign – and he stays and keeps learning. Because he is a young lad and he needs to learn more.”