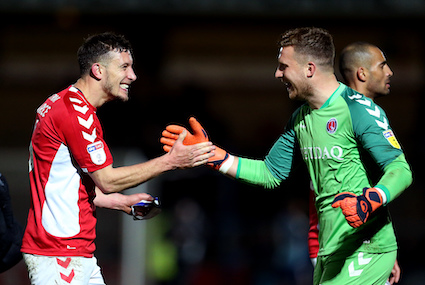 Lee Bowyer missed out on March’s League One Manager of the Month award to Luton’s Mick Harford – but admitted he would gladly take three points instead when the two form teams collide at The Valley today.

The Addicks’ 1-0 win at Wycombe Wanderers on Tuesday night keeps alive their slim hopes of a top two finish.

And this weekend is a mouth-watering fixture.

Charlton are unbeaten in 10 matches and have gone 14 fixtures without a loss at The Valley. Runaway leaders Luton are on a club record 28-game undefeated run.

But the Addicks chief said: “I’d have swapped the award for three points on Saturday.

“Luton’s form is unreal – they deserve all the plaudits they get. I don’t know if anyone has mentioned this, but Mick has done an unbelievable job – because since he has come in [to replace Nathan Jones] I can’t remember them losing.

“I know they were doing well but as a new man he has gone in there and basically just let them carry on.

“When he first got the job I thought ‘yes, this could be good for us – because he may change things’. He might be different in the way he is in the changing room, but that’s it. Everyone knows my motto is ‘that if it ain’t broke then don’t try to fix it’.

“For what he has done – it’s outstanding.”

Luton will be deprived of striker James Collins, who has scored 22 goals this season, as he serves a one-match suspension.

“He is going to be a big miss for them,” said Bowyer. “Their wing-backs are very good. I think all their players are very good, in different ways.

“I call it a puzzle – and their puzzle is very good. They recruited in January bringing in [George] Moncur – that was a massive signing for them. He has got some vital goals and got a bit of everything.

“If we can end their run then the teams above us will be thinking ‘wow, they’re chasing us’.  Not only that, even if we don’t make the top two then people will be thinking they don’t want to be playing us in the play-offs. So it has an effect in many different ways.”