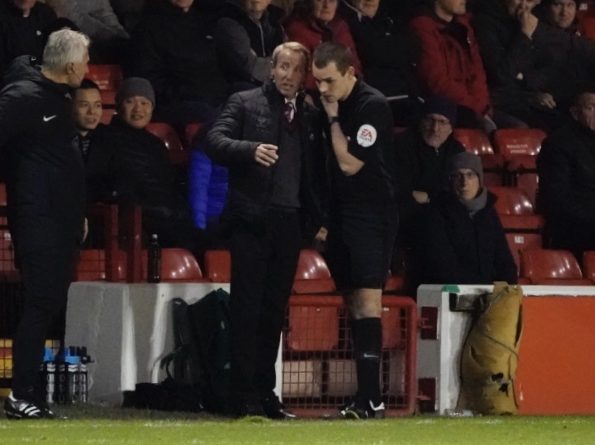 Charlton boss Lee Bowyer has revealed that two of his players suffered dislocated shoulders during Tuesday evening’s 2-0 win at Walsall.

Striker Igor Vetokele was stretchered from the field after a fall following a fifty-fifty challenge in the first-half. West Ham-loanee Josh Cullen was also forced off in the second-period as the Addicks’ ever increasing injury list became even longer.

The duo will join the likes of Lewis Page, Patrick Bauer, Billy Clarke and Jake Forster-Caskey who have all been side-lined for long stretches of time, as well as Ben Reeves and Anfernee Dijksteel who both suffered hamstring knocks during the 2-0 home win against Doncaster on Saturday.

“He’s dislocated his shoulder,” explained Bowyer when asked about the extent of Vetokele’s injury.

“He’s gone to hospital. Josh Cullen, he’s dislocated his shoulder. It’s just unreal. Saturday, we get two hamstrings and today we get two dislocated shoulders. It’s just not normal. We just have to get on with it.”

Lyle Taylor, who scored the Addicks’ first goal at the Bescot Stadium from the penalty spot, was a major doubt ahead of the fixture due to a stomach muscle injury.

Indeed, Bowyer had already ruled him out of the game, only to be surprised by the striker’s recovery this week.

“Yesterday Lyle said I feel a lot better and I want to play,” he said.

“When your striker, who’s scored eight already, is telling you he wants to play and wants to fight for the team, I have to go with that. He gives me everything. He’s a great lad. I was as surprised as what everyone else would have be today. Even then you think do I take the chance? I know how much he was struggling on Saturday but I have to. We have to win games. He came here, put his body on the line, scored and we got three points.”

Taylor’s strike-partner Karlan Grant had started the game from the bench, although was soon called upon due to Vetokele’s knock.

“I thought I’d freshen it up,” revealed Bowyer.

“Igor at the top. Igor’s looked good in training. He’s a bit different to Karlan. He comes alive well in the box, might hold the ball up a bit better than Karlan. He’s more physical. I knew it was going to be tough here, they’re a good side. I knew it was going to be ta physical test. So, I thought I’d go with Igor. I said I’m going to start changing things up now. I’ve learnt a lot in the past week that has just gone before now.  I believe in my squad. I believe in all of them. They’re all good and they all bring something different. I have to start using them.”