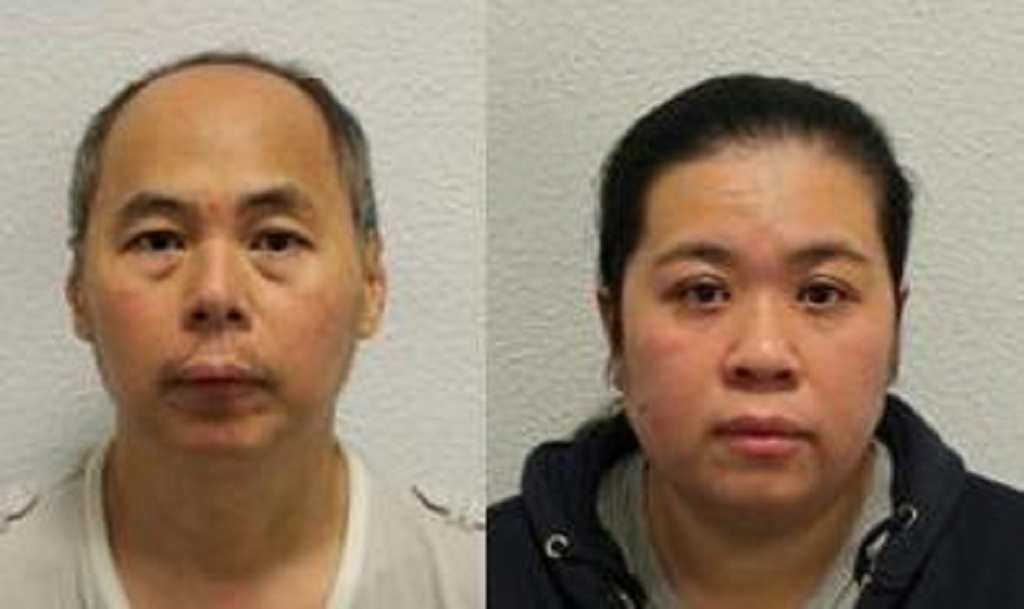 A couple who subjected three young children in their care to a tirade of physical abuse have been jailed.

Yea Ping Chan, 42, and Foo Khong Heow, 49, both of Baring Road, Lewisham, were sentenced at Woolwich Crown Court on Friday, 27 April.
Chan was sentenced to four years and two months’ imprisonment and Heow was sentenced to three years and four months’ imprisonment.
Chan and Heow pleaded guilty to two counts of cruelty to a person aged under 16 years at the same court on Tuesday, 13 February. Chan also pleaded guilty to assault by beating.
In the care of Chan and Heow were three children, including a six-year-old girl that they adopted and a three-year-old girl and a seven-year-old boy who were in their care.
On 1 September 2017, police received a referral from the NSPCC for officers to carry out a welfare check on a three-year-old child at Chan and Heow’s address. The reason for the referral was that the child was covered head to toe with bruises. Her left arm was said to be twice the size of her right arm and she had bruises around her neck.
Police attended the address and were met by Chan. Officers were shown through to a front sitting room where all three children were gathered. It was immediately obvious to the officers that the three-year-old child was the one the referral was about.

To the horror of all attending officers, the child had extreme bruising to both her cheeks. She was also wearing winter gloves indoors. Chan was asked why the child’s face was bruised, to which she replied that that had sucked on her face as part of a prayer ritual – Chan demonstrated by sucking on the back of her own hand. Chan was asked why the child was wearing gloves and she told officers this was because she bites her nails.
Chan left the room and officers looked at the injuries to the child’s body. She had what appeared to be older bruises to her arms, and hands which were covered with the gloves.
She was spoken to by officers but was unable to answer what had happened. The two older children were then asked what happened to the three-year-old’s face and they said Chan had punished her because she was biting her fingernails and toenails. They stated that she was very upset about it and crying very loudly.
They were asked who punishes them with the sucking, to which they said that sometimes Heow does it but on this occasion Chan had caused the injuries.
Both Heow and Chan were arrested and the children were taken to A&E to have their injuries assessed. They were then taken into police protection and subsequently place in foster care.

It was noted by doctors that the three-year-old had 54 injuries which the doctor documented as non-accidental injuries.

The house contained an extensive CCTV system which was seized by police and contained around 170 hours of CCTV footage.
The investigating officer viewed all of the CCTV footage which showed a series of assaults on all three children, however the main victim was the three-year-old.
The footage showed the youngest child being assaulted on almost a daily basis. Many of the assaults would happen during the night with Chan dragging the three-year-old out of bed by her hair and subjecting her to up to seven hours of abuse which included biting, sucking, pushing, shaking and hitting her with implements repeatedly.
Chan is seen to put a cloth or items of clothing into the victim’s mouth whilst assaulting her and sitting on top of her body. When the victim was not being assaulted, she was made to stand in stress positions and squat continuously. No medical attention was sought for the victim at any time during this period.
Heow was seen to force his feet into the three-year-old’s mouth. He also violently hit the three-year-old and six-year-old with a stick.
Chan and Heow were charged on 19 December 2017.

The investigating officer PC Alice Hammick-Smith, from the Met’s Child Abuse and Sexual Offences Command, said: “Both Chan and Heow carried out a despicable campaign of abuse on three young, defenceless children. These children should have been protected from harm by Chan and Heow, instead, they were subjected to extreme violence on almost a daily basis.

“The overwhelming level of evidence we gathered against them led to them having to plead guilty to these heinous crimes. I’m pleased they have received a custodial sentence and I hope it acts as a deterrent to others.”