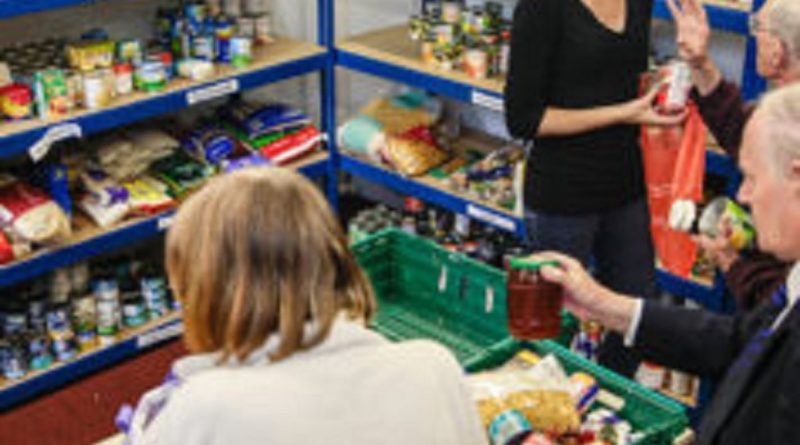 People in Lewisham have been “overwhelmingly generous” to food banks in the run up to Christmas, according to volunteers, writes Grainne Cuffe, Local Democracy Correspondent.

The food bank in Forest Hill supplies food and toiletries to people in desperate need – it is a place without judgement, where people are treated with dignity.

Sheena, who works at the centre and was fundraising in Tesco recently, said: “People were very supportive – it was really the exception that wasn’t supportive of helping people that come to a food bank.

“They understood that it’s quite stigmatising and not really something that anybody would want to do.

“Also people came to us and said I used a food bank and thank you for helping me at that time – I lost my job, or there was a delay in my benefit payments. It could be anyone.”

But as one volunteer asked, why are food banks necessary in a first world country? There has been a 20 per cent rise in usage over the past year in Lewisham.

Kind, matter-of-fact and frustrated with austerity, volunteers at the centre in Malham Road described the reasons people end up in using their services.

“It’s cumulative, the five-week wait for universal credit is one of the big things,” said Sheena.

Although the wait is supposed to be five weeks, it’s often much longer. People can get an advance while they wait, which puts them immediately into debt.

The centre recently received an email from a single mum – she could not call because her phone had been cut off.

She had three children and had lost her job due to ill health. Although she had qualified for Universal Credit, she was having to wait five weeks for the first payment.

With no other means to survive, she had to take a Universal Credit advance to cover the wait. Even with the advance, she was overdrawn and most of the money was taken in debt repayments.

Someone suggested to her that she contact the food bank.

“This is everybody we meet here – they are just waiting on universal credit,” one volunteer said.

“Sometimes their Employment and Support Allowance (ESA) is just stopped.

“If you’ve been living on benefits then you haven’t saved anything, you haven’t got anything behind you and you’re stuck.

“A lot of people don’t have computers at home, so they’re in real trouble.

“And then you wait, they say four to five weeks but that’s not true – it’s often much longer.

“And then they offer you an advance loan, which you take out because you have no other means of money because your ESA has been stopped.

“It’s a long process you haven’t had to do before – then your benefits kick in and it’s minimum money and it’s not always what you’ve got before.

“Then you start paying the loan back – they give you 11 months and out of this minimum money your advance loan is taken out. Some people are left on £10 a week.”

A spokesman for the Department for Work and Pensions (DWP) said: “Universal Credit is a force for good with 2.7 million people now being supported by the benefit.

“It gives people financial help if they’re unemployed, low-paid or unable to work.

“People can get paid urgently if they need it and we’ve changed the system so people can receive even more money in the first two weeks than under the old system.”

“Some people don’t qualify for benefits. We were desperate – my husband suffered a massive heart attack and was hospitalised for 10 weeks.

“We could not get benefits as he didn’t fit any category.

“Eventually, with some trepidation and humiliation, we went to the food bank.

“Before we went there, we felt it was like begging but the staff were amazing and kind. Only because of others’ generosity were we able to survive,” one woman said.

There are also a lot of stories of people being assessed as ‘fit to work’ when it is simply not the case. When someone is deemed fit to work benefits can be cut immediately.

The Trussell Trust, which runs the food banks, has launched a research project into why people use the centres.

Sheena said: “It’s found that there are life shocks and because of the way things are at the minute, low income and the benefits system are needlessly sending people into crisis.

“For example, if your husband has a stroke or you’re diagnosed with cancer, then you have a background of low income, zero hours, lack of savings and indebtedness.

“There is a lack of connectedness that divides between people who have and have not.

“If you meet people that are in these kinds of situations, desperate situations, you can’t not be touched by it.

“And we’re not the worst here at all, if you look at the north east or the north west or Northern Ireland – their rates went up by 30 per cent last year.”

Despite the heartbreaking stories they come across and their frustrations, people working and volunteering in the food bank focus making those who need their services feel welcome and at ease.

Sheena said: “We’re meeting people who have been treated wrongly and we’re trying to be non-judgemental and show them that there is a bit of hope – that there are people who care and that will show compassion to them.”

She added: “We have been overwhelmed by the generosity of Lewisham residents in the run up to Christmas.”