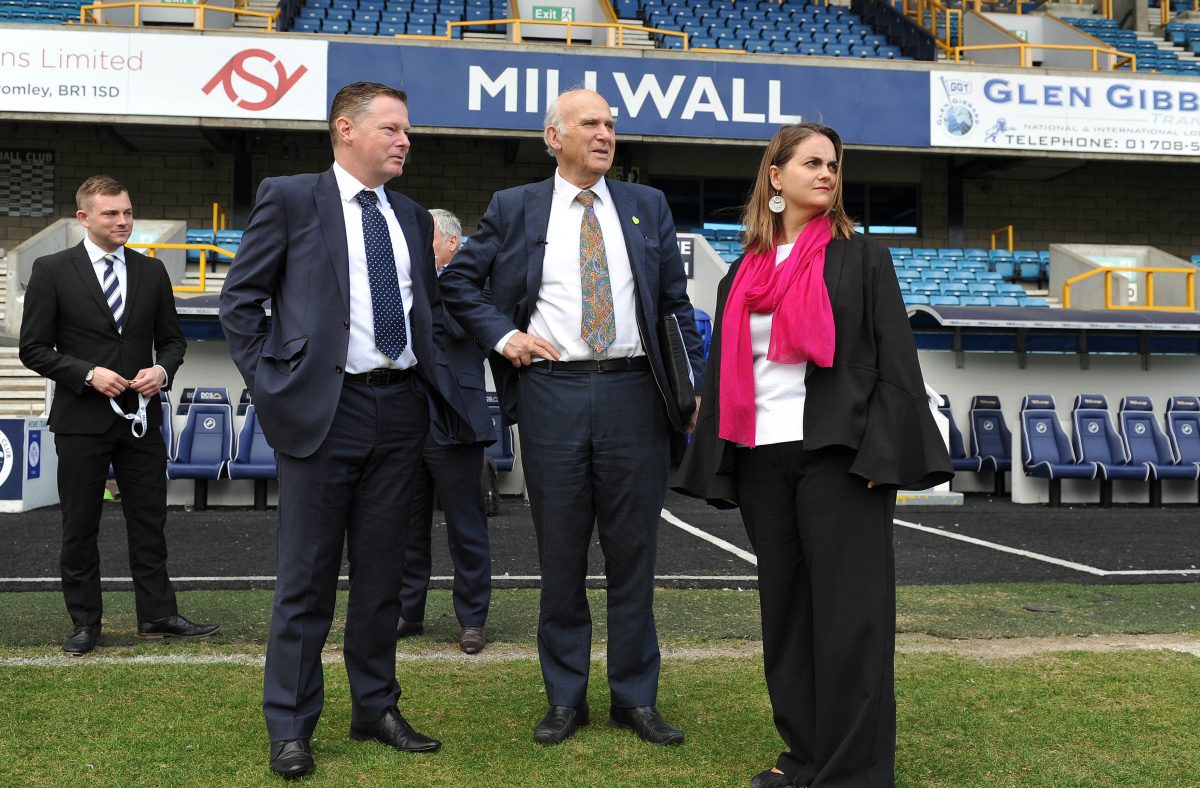 The leader of the Liberal Democrats has criticised town hall chiefs on the regeneration scheme around Millwall FC’s ground, the Den.

Sir Vince Cable visited the Lion’s stadium on Thursday May 23 where he said the party would campaign to lift the threat of a compulsory purchase order (CPO) that hangs over the club.

The Lib Dem leader said: “The threat of the CPO applied to the Millwall development must be stopped.

“It would make it extremely difficult for them to perform their community role. It might even, in extreme circumstances drive them away to another stadium. Which would be a disaster.

“They are very worried about it and they haven’t been able to get the Labour run council and the new mayor to withdraw the CPO.” The New Bermondsey scheme around the Den had originally been announced in 2005 by then Lions chairman Peter de Savaray, who wanted to build a hotel and leisure complex there.

But Renewal, created by former Labour mayor of Lewisham David Sullivan and former Lewisham senior officer Mustaq Malik, were meanwhile snapping up much of the land around the stadium.

John Berylson became Millwall chairman in 2007 and hoped to futureproof the club by developing plots of land around the ground and renting out the properties.

But instead, the club’s landlord, Lewisham council, decided to take possession of three pieces of land around The Den using a CPO – and hand them over to Renewal for its own scheme.

Sir Vince, who was visiting the Den with Lib Dem Lewisham East candidate Lucy Salek, said: “Lucy would cast a much more searching light on what is happening around that project and certainly make the Mayor and the council change tact.”

In the local elections three weeks ago the Labour group ousted the one Green councillor on the council, which means Lewisham is a one party state.

This has caused a by-election which will take place on June 14. Ms Salek said: “I have been following the mess that Lewisham council has been making for quite some time.

“So it was great to be able to sit down with the Community Trust and the board.

“I’m extremely disappointed that they are still living under the threat of this CPO. They told me it is having a day to day impact on how they can invest in the club and the future.”

She said she will focus her campaign on Brexit, schooling, housing and the rise of violent crime.

She said: “I am very worried about Lewisham, all of these factors together are having a terrible impact and the Labour monoply we’ve had for such a long time is not doing us any favours.”

A spokesman for Lewisham council said: “We are proud that Millwall Football Club has called Lewisham home since 1910 and want them to stay here for generations to come.

“It’s time for Millwall and Renewal to start talking so we can bring homes and jobs to New Bermondsey and keep Millwall Football Club in Lewisham.”