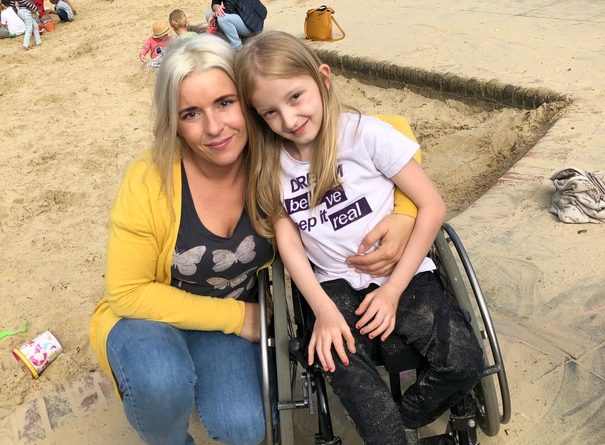 A mum-of-three is on a mission to get kids in wheelchairs socialising and building friendships.
Emma Russell, based in New Eltham, is calling on parents and kids to join The Wheelie Gang in the summer at the Turning Pages Community Centre in Nesbit Road, Eltham.
Her daughter, Evie, nine, is in Year 4 at Montbelle Primary School in New Eltham but suffers from feeling low and alone as the only child in her school in a wheelchair.
Emma, 33, said: “She’s got no friends in wheelchairs and no one in her family is in a wheelchair.
“There’s got to be other children in the same situation as her. I want to bring them together and make them feel part of something, that would be amazing.”
When Evie was in a wheelchair at just two years old Emma came up with The Wheelie Gang idea and is now in a position to launch it.
Emma said: “The main objective is for these lovely but sometimes lonely children in wheelchairs to have a place to meet other children in similar situations, to connect and make friends.
“And at the same time have as much fun as we can provide, so they all totally forget about their disabilities and simply enjoy being kids – just like kids should.
“As a bonus the parents and carers can meet, have tea and chat and maybe even be a comfort to one another.”
The idea grew as Emma struggled to take Evie to child play groups because they did not cater for children in wheelchairs.
She said: “It gets her down daily. She puts on a different face when she’s out. Everyone always comments on how happy and bubbly she is but when she’s at home she’s crying and always telling me how much she hates her wheelchair. She’s just really down about it.”
This became more clear as Emma became a mum to Rosie, five, and Maximus, three, who she is bringing up as a single mum in her home.
Emma said South London lacks activity groups for children in wheelchairs so she is taking matters into her own hands.
At her five months pregnancy scan Emma found out Evie had spina bifida, a condition where the baby’s spinal cord does not develop fully in the womb.
Above the defect Evie is able bodied but she must use a wheelchair to get around.
Emma said: “The hospital told me not to have her but my instincts told me she was going to be OK mentally.
“She’s such a bright and intelligent young girl, she’s just going through a really difficult time of feeling alone right now.
“I will put my all into this. I promise I’ll find her friends who are also in wheelchairs.”
Emma suffers from fibromyalgia, a long-term condition causing widespread pain in her arms, legs, back and neck. She said: “It can be quite debilitating at times to be honest. I used to use crutches for five years but then when I knew she was going to be in a wheelchair I said I’m not going to use them. But I can’t lie by saying there aren’t times where I want to use them now.”
But after having children Emma found a new focus.
She said: “Before it was all about me – me and my pain. But now I have to put it aside. I meditate regularly and that really helps and I have to look after my health a lot more now.”
The Wheelie Gang will rely on volunteer work and any donations the public can give.
Emma’s aim is to get a network of kids in wheelchairs laughing together to build relationships and calls on parents and children to get involved. The Wheelie Gang sessions will include arts and crafts, ball games and table tennis but going forward Emma wants the sessions to be led by the children.
Emma is supported by her partner Samuel along with Kenny and Reggie, who helped set-up the community project and flyers.
Volunteers Natalie and Louise have stepped forward for the launch and any money raised will go straight back into the project.
The Wheelie Gang’s opening day was yesterday, and they will meet every week between 4.30pm and 6.30pm going forward.
Emma said: “I don’t think Evie believed it straight away, she’s so excited about it. But she’ll believe it when she sees it.”