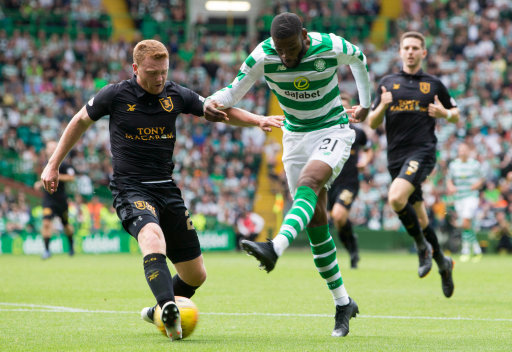 Millwall right-back James Brown made his debut in Scotland on loan at Premier League Livingston last weekend in front of a crowd of 59,000.

It was not the best start, with a 3-1 defeat at the hands of Glasgow giants Celtic at Celtic Park.

But Lions boss Neil Harris sees it as a hugely important step in the development of the 20-yearold, who would have had to wait in line for games at The Den behind Mahlon Romeo and Conor McLaughlin.

Brown, pictured above blocking a shot from Celtic’s Olivier Ntcham, was an unused sub for his loan side’s 0-0 home draw with Kilmarnock this Saturday.

Harris said: “It is a long way to travel for your football. But he was at Carlisle in League Two last year and he did ever so well there.

“It is a great experience for any player to live away from home, to get out of your comfort zone, of being in the same environment where you have been for years and years.

“We have two very talented right-backs and we felt the best thing for his career and his progress would be to get him out on loan again.

“It is always hard to know where to let young players go. Ideally, he needed to make the step up to either League One or the Scottish Premier League.

“Signing for Livingston was a great chance for him and us. He has already had the chance to play against a big club in front of a massive crowd.”

Harris has other players out on loan – goalkeeper Tom King, who has already shown he will be crucial at League One AFC Wimbledon while midfielder Harry Donovan is at National League side Dagenham and Redbridge.

“They are players we like with a lot of potential,” said Harris. “It is an opportunity for them to develop in men’s football.”

Harris has not ruled out sending other players away on loan. He said: “There might be one or two who need to get a halfseason under their belts elsewhere to make sure they get the chance to play week-in and week-out.

“Players want to train during the week knowing they have the chance to get a game on a Saturday. If we get an approach to take some of our players, we would certainly consider it.

“But if players do go out, we would need to replace them and that is not always easy to achieve.”