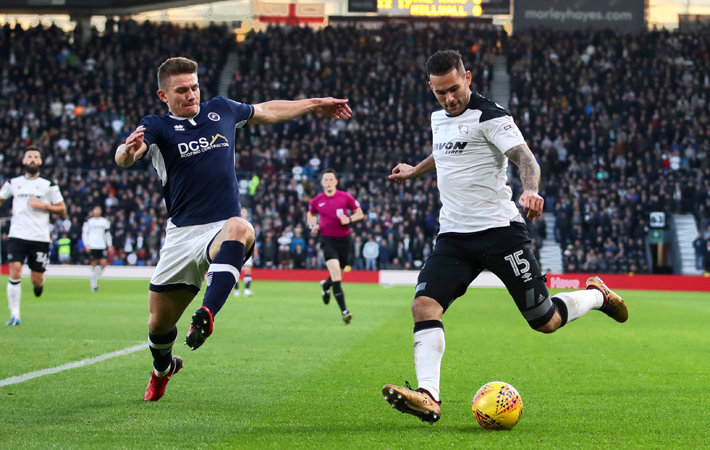 There may just be over three months of the Championship season to go, but it is going to take one hell of a string of displays from other members of the squad to take the Player of the Year trophy away from Shaun Hutchinson.

The centre-back has not so much proved a point after his release by Fulham that he is good enough to play at this level, as smashed it to oblivion.

Hutchinson has been so good, so consistent and so commanding, that you would not bat an eyelid if he was the subject of interest in the summer. If he has had a poor game, then I’ve not noticed it.

And on Tuesday night in the 0-0 draw against Derby, he was immense again.

This Geordie is sure and steady. The Lions’ defensive resilience and discipline was tested time and again by a Rams side who showed exactly why they have come steaming through to make a play for an automatic promotion spot.

But even in the closing stages of a concentration-sapping shift, there was Hutchinson hurling himself in front of Tom Huddlestone’s shot.

And another whole-hearted block on Matej Vydra in the first half after Jordan Archer pushed out Andreas Weimann’s cross was every bit as important as scoring a goal.

You don’t want to take away credit from other members of the Lions playing squad – but the defender has not had dips in form at any stage. It looks highly shrewd business that he was secured on improved and extended terms before the end of last year.

Boss Neil Harris has talked about Hutchinson being more communicative on the pitch. Once again in midweek he strapped on the armband with Steve Morison missing with a viral infection. This is a guy who lets his actions do the talking.

The shutout against Derby made it 10 league clean sheets for the season by the Lions. While their opponents always posed a threat, Archer was not massively troubled in terms of the saves that he had to make.

“We didn’t have a target of clean sheets but if I’d picked a number then it would’ve been up there as one in three [games],” said Harris. “It is an important part of our game – we’ve tightened up from the last couple of years.”

Four of the back five did not cost a penny in transfer fees – Jake Cooper the exception to the rule. It shows again how well Millwall have recruited without paying out the big sums that a club like County do.

The Lions have been unhappy at officiating this season and Lee Gregory was clobbered in the head by the left boot of Huddlestone in the box as the pair went for Jed Wallace’s cross. The striker needed six stitches in the resultant wound at half-time.

There were frantic appeals for handball late on after Cooper had headed a corner into a more dangerous zone of the penalty area, which was less conclusive.

You would have to say that Millwall had the two best chances of the contest in the second period.

The Lions like to pick out a centre-back to nod back across the box from corners and Cooper did exactly that to a Ferguson delivery, only for Tom Elliott to turn and fire over.

Derby substitute Ikechi Anya did loop the ball beyond Archer on 84 minutes but it was ruled offside.