Londoners are being warned to stay vigilant with a big crime wave predicted for after ‘freedom day’ next week.

Covid-19 restrictions are set to end on July 19 but with it could come a surge of criminal activity.

The Metropolitan Police are expecting the same kind of surge in burglaries experienced in July 2020, when numbers shot up by 28 per cent across London.

The figures rose by as much as 72 per cent in some boroughs.

Although burglaries increased almost everywhere in London once restrictions were lifted last year, residents in Bromley, Lewisham and Havering can be a little more confident that their areas won’t suffer too much.

Residents in Lewisham only saw a 4 per cent increase while Bromley was the only exception in that the number of burglaries actually went down after lockdown eased. 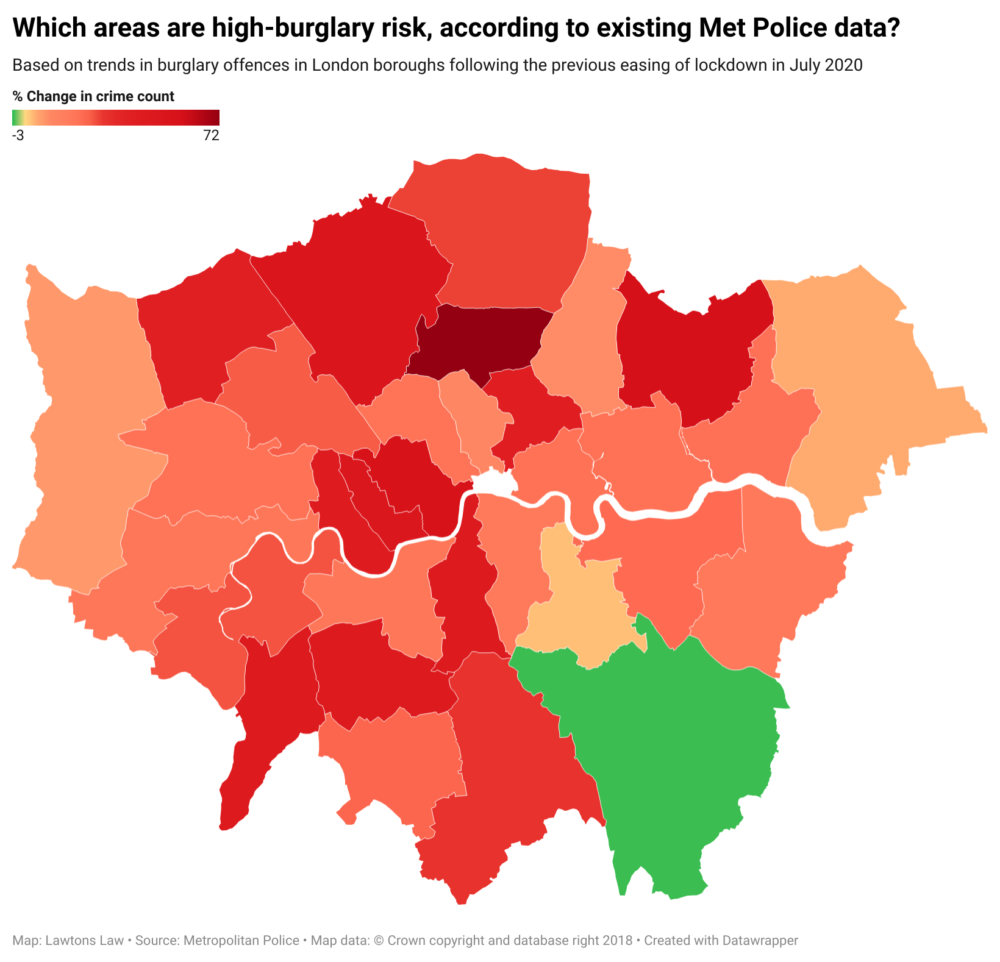 Freedom of Information request data gathered from the Met Police revealed that the items that are the most targeted by burglars in London where bicycles and accessories.

Residents are being warned to keep homes secure and avoid leaving expensive items on display.

Some of the oddest items stolen in the last year include horses, zoo/farm animals, intercom systems, pet food and explosives.

Stephen Halloran, Director at Lawtons Solicitors in London, said: “Lockdowns are exceptional times: never before have so many people stayed at home.

“Of course, people being at home 24/7 makes burglaries a lot less likely, as the data shows us.

“The rise in crime after lockdown is also inevitable, but what worries me is that people became complacent after the last lockdown eased.

“Some areas that had a lower number of burglaries during lockdown then had huge increases again when restrictions were lifted.

“We certainly noticed a dramatic spike in burglary cases when previous lockdowns ended and we’re expecting the same will happen after July 19.

“Therefore it’s vital that people are aware of the dangers, particularly if they live in one of the London burglary hotspots indicated by the data.

“Many people will also take the opportunity presented by the end of lockdown to have a holiday – either abroad or in the UK – which makes their home particularly vulnerable.

“We don’t want to see another upsurge in burglaries, so we’d urge everyone to be extra cautious about home security.”

Jamie Pugh, Manager at Roché Security, said: “It’s easy to forget that the effects of burglary go beyond the financial cost of replacing goods or repairing any damage caused.

“Instead it’s often the thought of being burgled that causes the most distress and can leave you feeling unsafe inside your own home.

“We come across stories all the time from customers who have fallen victim to burglary in one form or another.

“Sometimes it’s unavoidable, but in some cases it could all be prevented by simply stopping thieves from seeing inside the property.

“We would always advise customers to try and obscure views inside the home by adding blinds or some form of physical protection over vulnerable windows and doors.

“The simple things, like making sure windows and doors are locked, are always important.

“The principle being that you don’t want to make it any easier for a thief to gain access.

“Smart security solutions like cameras and video doorbells can help you keep a better eye on things while you’re away and are usually controllable from your mobile phone.

“These can be linked to home automation systems, which we often install for customers. Residents can then control security shutters, for example, in the same way as other security devices.”