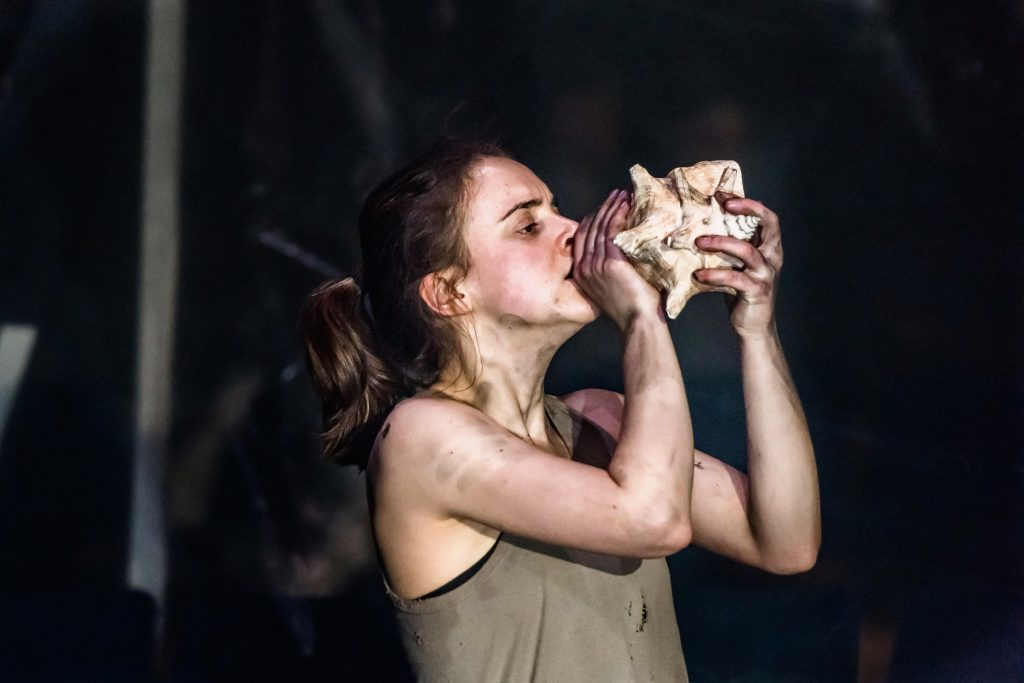 This production of Lord of the Flies took immersive theatre to another level.

Approaching Greenwich Theatre I was met with the babble of children’s chatter. About 50 – 60 teens were queued up outside shouting, pushing, taking selfies and generally doing all they could to keep their five teachers in a perpetual state of anxiety and anger.

“Right,” a teacher in his twenties shouts, “you all have your tickets, look at the number on the ticket and sit in that seat. Do not swap tickets.”

I see about a dozen of them have already passed tickets back and forth.

This is going to be interesting.

William Golding’s novel about school boys marooned on an uninhabited island “lends itself well to performance with its energetic depiction of ritualistic dancing and hunting,” Dr Sara Reimers writes in the programme notes. This Lazarus production directed by Ricky Dukes makes full use of the opportunities the novel affords. Actors race about the theatre howling and screeching. Scenes are punctuated by foot stomping dances accompanied by thumping drum beats.

This kept the school children in the crowd temporarily subdued. But in the quieter moments, as the island kids try to erect structures of civilization, the audience grew a bit restless.

Some were pointing and laughing, others plunged hungry hands into crackling packets of sweets and crisps.

One girl had her head tapped by an eager boy with braces. She whipped round.

“Oi, don’t touch my hair you perv,” she said while an actor on stage gave a eulogy to the beauty of the moon and the power of nature.

Furious teachers swivelled round and gave long piercing glares. Phones were confiscated and names on the detention list continued to grow.

But as the play progressed the struggles between Ralph and Jack to gain power and leadership of the island boys began to engross the audience.

He captures the pomp and menace of the choir leader strutting about covered head to toe in pig’s blood, looking threatening and ridiculous at the same time. Amber Wadey’s portrays a balanced and plucky Ralph caught between the enticement of power and a desire for friendship.

But Benjamin Victor steals the show as Simon opening up his ethereal soliloquies.

This was another example of how fresh productions are putting the dramatic back into the drama at the Greenwich Theatre. The fact the that half the audience behaved as if we were up the road occupying the pit at Shakespeare’s Globe theatre might not be a disaster. In the 1600s, the audience in the pit sang, flirted and pelted the actors with nut shells and orange peel when the show didn’t hold their attention.

That said, as the play moved to its horrific climax the raucous crowd of teens were transfixed and when the lights went up they erupted into a standing ovation.

The play runs every night this week.