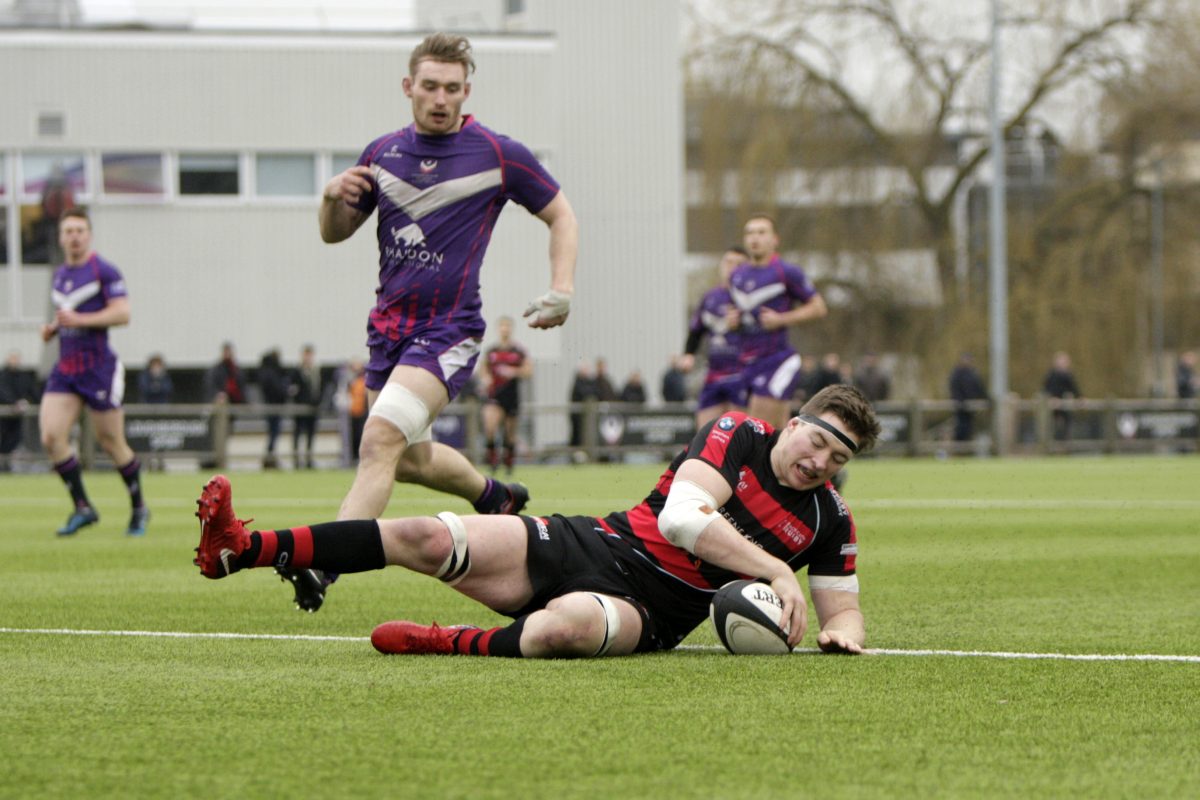 The concession of a soft try at the outset, and another three minutes from time, caused Blackheath to come within a whisker of a fourth successive defeat against a Loughborough side fast becoming something of a hoodoo for the Club, in this high scoring contest.

However, having moved into a five point lead, a needless penalty given away by the Students, whose cynicism and incessant complaining blighted an otherwise valiant performance from a team fighting against relegation, offered Blackheath one last chance.  As line-out ball swept across field Jake Lloyd, having come off the right-wing, sent Tom Chapman haring towards the left corner to level the scores, Joe Tarrant, whose last-ditch goal-kicking had given the Club victory on three previous occasions this term, seeing his conversion fall just short.

Dramatic, yet a little flat for both sides who will feel they had the opportunity to take a full set of five points.

Blackheath had recovered from their early set-back, where Student wing Jack Stapley strolled through some weak cover for the opening try on just 55 seconds, to drive Danny Herriott across on seven minutes, followed in similar fashion by Tom Stradwick for a 12-7 lead at the end of the first quarter as the Club pack gained the upper hand.

Nevertheless, always dangerous in open play, the Students worked space for Jordan Olowofela to race over from 40 metres out, the left-wing nipping over for his second after the Loughborough pack had set up ruck ball on the Club goal-line, but Blackheath were aggrieved to be left 19-12 in arrears at the interval as their reward for three penalties, after tearing apart the Students’ scrum five metres out, was a mere yellow card for loose-head Owen Hills.

Indeed Markus Burcham’s fury at his side’s inability to capitalise on their advantage had been apparent but now, after the re-start, it was the Club skipper who began to open up the opposition’s defence and inspire Blackheath’s best period as the visitors crossed for three tries in an eight minute burst that put them ten points clear.

Upping the pace, Burcham himself cut a fine angle to cross for the first, before Matt Miles, showing nimble footwork once again, and Alex Pickergill, gained ground for Neale Patrick to stretch over the try-line.

Tom Baldwin burst away from a maul in midfield, to cross virtually unopposed on 53 minutes, but such intensity couldn’t be maintained and, as they’d done in the first period, Loughborough fought their way back.

A Tom Hardwick penalty was followed by a period of pressure, eventually relieved as Blackheath turned over possession close to their goal-line, but as quickly as the siege was lifted the hosts returned, and although the visitors disrupted line-out ball following a penalty to touch, the Students recovered to see Stapley cross for his second try, bringing the Leicestershire side within two points with six minutes remaining.

All Blackheath needed to do was control possession, but loose ball following their own put-in was hacked on for Olowofela to race forward, pick up, and cross close to the uprights, setting up the finalé.

Blackheath are on the road again next week as they travel up the M11 to make their first-ever league visit to Silver Leys for the re-arranged fixture against Bishop’s Stortford.