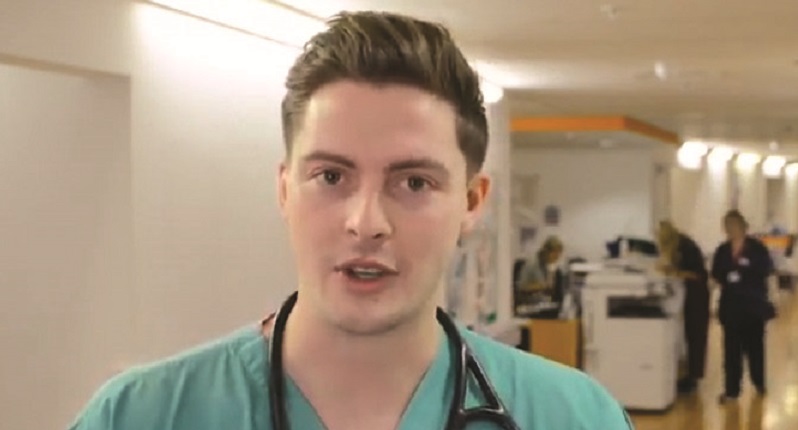 NHS waiting lists might surge at Lewisham Hospital. But it may have nothing to do with lack of funding. One factor may be the return of Love Island contestant Dr Alex George.

The accident & emergency medic has announced he’s back to his day job of tending to patients, as he had been for four years until his appearance on the ITV reality dating show.

Lewisham Clinical Care Commissioning Group, who foot the bill for the NHS in the borough, seem especially firm in their warnings this year about the dangers of slipping on ice, cooking the turkey and putting the fairy on top of the tree.

They might be worried about a surge in household injuries involving women keen to be seen by the 27-year-old. But that’s not why he’s come back.

He said a former patient told him he had inspired her to study hard, go to university and become a doctor.

He shared on Instagram: “I just bumped into a young lady who I treated a year ago in A&E, where she nearly didn’t make it. “She now tells me she’s doing her A-levels and wants to go to university to become a doctor.

“I get asked why I went back to A&E, this is why. “Love Island was the experience of a lifetime, but ever since I left the villa I’ve genuinely missed working for the NHS. That’s why I’m going back to A&E.

I trained for years for the opportunity to help people, and I can’t wait to get back to doing what I love.

“I’ll be using my platform to raise awareness around health issues among young people.”

During an appearance on This Morning in August, he said: “I absolutely love my job and while I was away I started missing it in a lot of ways, and every now and again we’d talk about medicine in the villa and I’d love all that.

“I think people of my age want to know more about the medical world but I don’t know if it’s always as accessible, so I would love to do TV doctor work because I am passionate about my job and would love to make it accessible to all audiences.’”

Dr Alex has also been filmed for a recruitment YouTube video, saying why he likes working at the hospital so much.

He said: “I did my second year foundation training here and had a brilliant time. I worked in obstetrics and gynaecology, accident and emergency and sexual health.

“When I finished my second year, that would have been in August of 2017 I decided to stay on in A&E because quite frankly I really enjoyed it.

“We had really supportive staff – nurses and doctors and occupational therapists and physiotherapists – all the healthcare professionals and I loved staying here.

I went on to a staff shift, which meant I could be a bit more flexible with the things I was doing outside work as well.” He was also pleased with their response to his going on Love Island.

“I was a bit apprehensive at the time about how that would go and whether it was something I would be supported in doing by the staff here,” he said.

“Actually the consultants were amazing. They said it was something different – go there and enjoy.

“After the show I really missed being in work and I’ve trained nearly 10 years to be a doctor and I was really happy here at Lewisham Hospital.

Coming back felt like a natural step to me. “I have come back part-time and I’m absolutely loving it. I would really recommend it to anyone that wants to, because it’s a brilliant place to work.

I think you have a great time, will be well supported and I think you’ll enjoy.” He might need to take a couple of percentage points off the pulse rate of any patients he tends to, though.