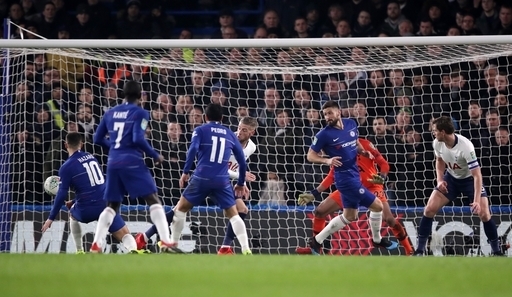 David Luiz smacked home the fourth penalty for the Blues and sent the home side to Wembley as the sensational second leg of the Carabao Cup semi-final was won by spot kicks after the home side defeated Spurs 2-1 on the night but drew 2-2 on aggregate.

With competition rules eliminating extra time, it was down to who had the greater nerve and the Blues had it in spades, scoring the first four kicks while Spurs’ Eric Dier sailed his effort over the bar while Lucas Moura’s was weak and easily saved by Kepa Arrizabalaga.

That left Luiz to strike the perfect kick past Paulo Gazzaniga to secure a final spot at Wembley  on February 24 against Manchester City.

It was a compelling game that saw the Blues overturn the 1-0 deficit with goals from N’Golo Kante and Eden Hazard. Spurs’ Fernando Llorente then headed the visitors back  into the game and the match ebbed one way then the next, but no further goals were found.

The spot kicks gave the added drama, but none were needed as the game pulsates from start to finish.

Pedro had the first chance of the night, latching onto a long ball by Jorginho. The Spain wide man raced into the Spurs area on three minutes, cut inside from the right, a let fly with a low left-footer.

But his goal-bound effort was blocked by Toby Alderweireld.

David Luiz got thumped by a late challenge by Eric Dier on six minutes, leaving the Brazilian centre-back crumpled on the  ground. Dier wasn’t even shown a yellow for the yellow late stamp.

Spurs followed this opening salvo with a period of pressure of their own – two corners in succession, failed to reap any benefits.

Sensationally the Blues levelled the aggregate score with a brilliant daisy-cutter from N’golo Kante on 27 minutes, that went through two Spurs defenders and caught Paulo Gazzaniga off-guard as he let then ball slip through his grasp on 27 minutes.

Spurs were forced to make a change on 33 minutes – Danny Rose entered the fray for injured Ben Davies.

Olivier Giroud was a toe-poke away from doubling the Blue lead on 36 minutes. He managed to get a touch on a byline cross from Eden Hazard, but it did not have sufficient purchase on the ball to trouble Gazzaniga, and the ball trickled to the stopper at his near post.

But that goal did come – seconds later – and a magnificent move started by Hazard was finished by Hazard. The ball was passed to Pedro, Cesar Azpilicueta before the ball was sent into the penalty area and the mercurial Belgian forward stuck out his left boot, and slotted the ball into Gazzaniga’s side netting to globe the home side a 2-1 aggregate lead.

But Spurs came out fighting and within five minutes had scored – a glancing header from Llorente rom a Rose cross zipped past Kepa.

Giroud could have reestablished the two goal buffer seconds later when he was sent clear by Kante, but his right-footer was half saved by Gazzaniga and then snaffled at the second attempt.

Referee Martin Atkinson then booked Jorginho for a sliding challenge and then after complaining, head coach Maurizio Sarri.

This was quickly followed by a yellow for Kante for a foul on Rose.

Hazard then sliced a glorious left-footer on 58 minutes inches wide of Gazzaniga’s goal as  the game ebbed and flowed.

Azpilicueta was next in Atkinson’s book for a foul.

Moura almost made the perfect start with his first touch being a blistering left footer on the right. Thankfully the the power shot smacked into Kepa’s side netting.

Spurs’ Moussa Sissoko was given a yellow on 73 minutes after hacking down Jorginho.

Sarri decided to bring on Willian for Pedro 75 minutes.

He was quickly followed by Davidson Sanchez – on for Sissoko.

Sarri’s then brought on Mateo Kovacic for Ross Barkley with 10 minutes left.

But while then Blues tried to win the game, then visitors were dead on their feet.

Giroud had a last gasp chance as the clock ticked into added time, but mistimed his effort.

He missed another deep into time, a glancing header rather than a firm contact was needed and the ball inched wide of goal.

The game went straight to penalties

Eriksen was first up and easily scored.

Willian levelled to make it 1-1

Lamela was next up for Spurs – and he scored to put them 2-1 ahead.

Azpilicueta strode up and smashed home levelling again at 2-2.

Dier was booed by the Chelsea fans as he walked up. He placed the ball on the spot and thrashed the ball high over Kepa’s crossbar.

Jorginho  was next for the Blues and he trickled the ball cooly past Gazzaniga to give the Blues a 3-2 advantage.

Moura’s shot was then saved by Kepa as the kick to win the tie fell to Luiz and he smashed the ball home to put the Blues deservedly to Wembley.