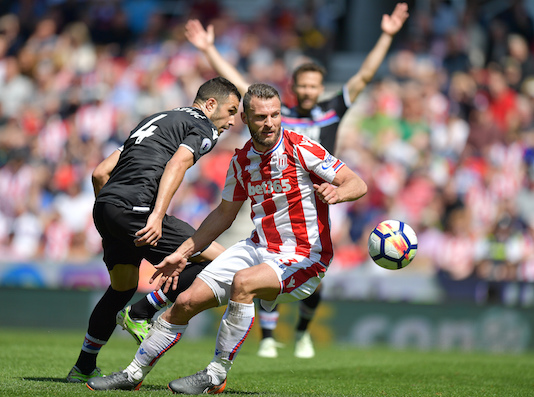 Luka Milivojevic won Crystal Palace’s Goal of the Season award – but reckoned there were better finishes this season.

The Eagles midfielder has been given the captain’s armband by manager Roy Hodgson, got into double figures to top the club scoring charts as well as playing a big role in guiding the club to Premier League safety.

The Serbian international collected his individual award on Wednesday night in a club event held at Boxpark, Croydon.

“I have to appreciate that they [the fans] voted for me as the goal of the season, and I am happy because they did,” said the 27-year-old. “But I think the team scored much nicer goals than mine – we scored [at least] three or four very nice goals, but okay, that is the fans’ decision and I respect that, and I am very happy.”

While Milivojevic pointed to other strikes from the Eagles this season, his 80th-minute winner away at relegation rivals on the South Coast – against former Palace shotstopper Alex McCarthy – helped Palace came from behind to take three points.

“If I look back personally, that was the most important and biggest moment for me [this season],” said Milivojevic, who was presented with his trophy by assistant manager Ray Lewington. “Two days before, I missed a penalty against Manchester City and then [this Southampton goal] happened 48 hours after that game.

“That goal meant a lot to the team as well because we won 2-1, and it was maybe our second win away, and that was most important for the team.

“All of us we are playing football for our fans. We had an opportunity to come [to Croydon] and see the fans and to do a signing session – that is a big part of our club, they’re maybe the biggest part of our club. Personally, I like a lot to be with the fans.”