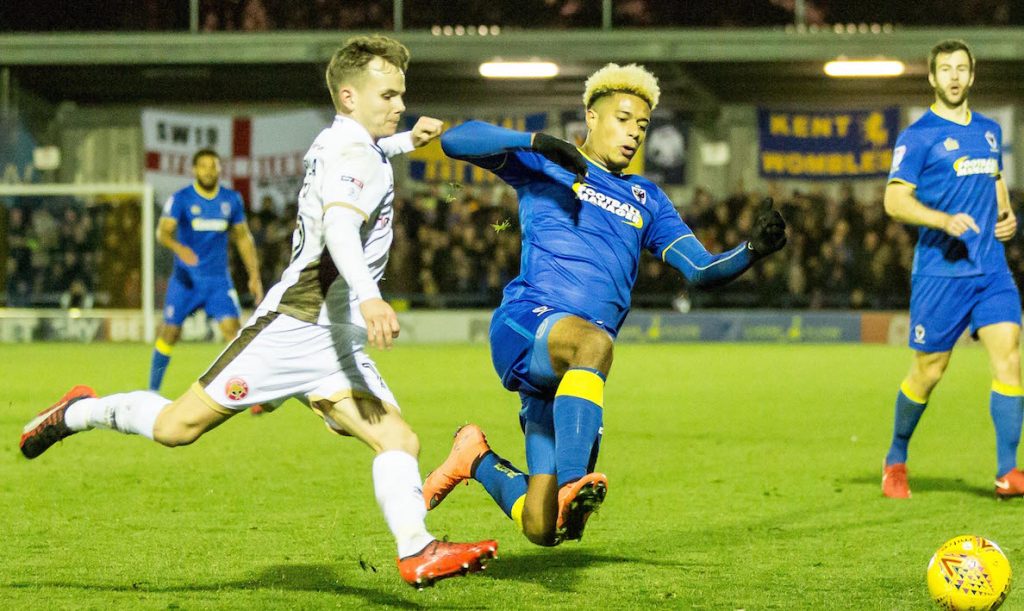 Lyle Taylor wants to play centre-forward for AFC Wimbledon – but will not kick up a fuss if boss Neal Ardley pushes him back wide.

The 27-year-old has seven goals in 24 matches this season but has been deployed wide at times.

Dons fans had clamoured for Taylor to be put back through the middle as the side struggled for goals and he claimed his first hat-trick in English football in a 3-1 win over Rotherham in October.

“It’s hard because the manager sets his team up how he sees fit – I’m essentially his employee,” said the former Millwall youngster. “He plays me where he feels I’m best to play at any given moment.

“He knows as well as I do that I wanted to play through the middle but it wasn’t possible at the time. I’d like to think since he has done it that I have half-justified that with goals and the performances I have given in recent weeks.

“But if he asks me to play out there and it is the best thing for the team then I’ll do it and to the best of my ability.”

Taylor has 44 goals in 122 games for the Dons and admits his matchball from his treble against the Rotherham was special.

“I scored a few up at Falkirk. I’ve got all the balls in my basement at home. My most recent one and the play-off final ball are in my room in a suitcase. I’ve got my shirt from my hat-trick game for AFC Wimbledon – it’s the first hat-trick AFC Wimbledon have had in the Football League, it’s a nice accolade.

“It is something that will always be there when it comes to looking back. It’s nice to keep little things like that, it means a lot.

“I’ve got one of the gold balls from the play-off final, signed by all the boys – it is the times I’ve had some success at the club.

“But the show always goes on. It is Charlton at home in the FA Cup. It’s a big game for us and I assume they feel the same.”

Wimbledon produced a decent defensive display when the two clubs met in League One at The Valley on October 28. Ricky Holmes’ late free-kick settled the contest.

“He is a very good player and had the quality to produce something like that from what is effectively not even a scoring opportunity in my opinion,” said Taylor. “That tells you how good he is.

“The FA Cup can kick off a run of form, some positive results. It can help with a little bit of confidence. Obviously the priority is for us is the league. If you said to one of our fans that we’d be comfortable in the league but get knocked out this round they would probably take that.

“But the cup is something special, isn’t it? We’ll have to do the cup justice and do everything we can to win the game. It is a one-off and the reins are a little bit freer than when it is a league game when you are not fighting for points. Last season was different, we were as high up as fifth in the table.

“We’ve got a different style of play and it is going to take a bit of time to bed in. We need to start picking up results – no-one is shying away from that fact. Hopefully we have got enough in the dressing room for us to do that.

“Only time will tell. We’ll fight tooth and nail to keep our status in the league until we achieve that or go down fighting.”