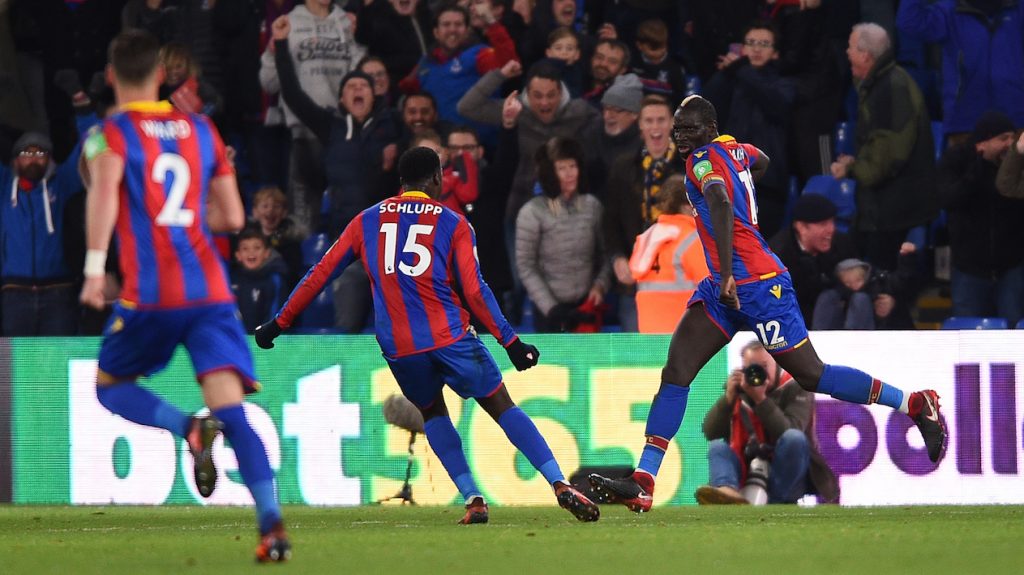 The Eagles came from behind to claim all three points following Ruben Loftus-Cheek’s first goal for the club that cancelled out Xherdan Shaqiri’s 53rd-minute opener.

But Palace won it in stoppage time when Wilfried Zaha kept the ball alive and his left-wing cross found Yohan Cabaye at the back post. The French midfielder’s eight-yard effort came back off the post and fell to Sakho who finished into an empty net from close range.

Loftus-Cheek’s capped another fine performance with his first Palace goal and was the Eagles’ brightest spark alongside Wilfried Zaha as Roy Hodgson’s side produced a brave comeback performance to bolster their survival hopes.

Palace remain bottom of the Premier League on eight points after 13 games, three adrift of safety.

Loftus-Cheek should have given Palace the lead after 15 minutes when he was picked out by Zaha following the Ivorian’s low cross down the left wing but the 21-year-old’s six-yard effort was blocked by Erik Pieters.

Zaha again played in Loftus-Cheek with a surging run down the right wing after a quick 37th minute free-kick. Loftus-Cheek delivered a fine cross that was met by the head of James McArthur but his goal-bound effort was blocked by Kurt Zouma and the Scotland international’s five-yard rebound was smothered by goalkeeper Lee Grant.

Shaqiri should have put the visitors ahead on 23 minutes when he was put through on goal by Darren Fletcher’s incisive pass. Left-back Jeffrey Schlupp managed to hold up the Swiss international before Wayne Hennessey, recalled to the side after a five-game league absence, made a smart save with his legs.

But the Eagles had no answer for Shaqiri’s mazy 53rd minute run after the ex-Bayern Munich and Inter Milan midfielder evaded four Palace defenders and dispatched a powerful left-footed drive into Hennessey’s bottom left-hand corner.

Moments earlier, second-half substitute Christian Benteke displayed his rustiness when he struck his eight-yard effort wide after being played in by Yohan Cabaye. The Belgian wasted another opportunity in the 73rd minute when his curled effort from 15 yards was straight at Grant.

Palace were behind for only three minutes. Joel Ward’s crossfield pass was knocked down by Benteke to Andros Townsend who delivered an inswinging right-footed cross that fell to Loftus-Cheek who stroked the ball home from six yards.

Stoke controlled the closing stages and could have won it through Shaqiri and substitute Jese’s drilled 10-yard effort in the 75th minute that the Spaniard put wide.

Palace made the most of that good fortune when centre-back Sakho turned poacher to give the Eagles all three points at the death.