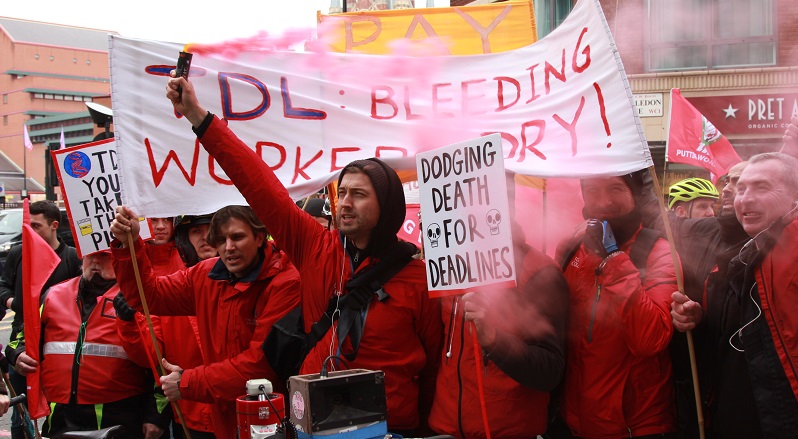 Scores of medical couriers who transport blood, test samples and fertility treatments around hospitals will go on strike for two days later this month, prompting their employers to put ‘robust’ emergency plans in place.

Members of the gig economy union, the Independent Workers of Great Britain (IWGB), will stay at home on Thursday and Friday of next week in protest at eroding wages and increasingly stressful deadlines.

Of the four-fifths of members who voted, more than 84 per cent were in favour of a strike because of “over a decade of stagnating pay and two rounds of pay cuts in 2015 and 2017”.

Supplies at the private Blackheath Hospital and Shirley Oaks in Croydon, both run by BMI, and the Croydon Day Hospital. TDL also has emergency blood contracts with some NHS hospitals such as the Royal Free in Hampstead and Central Middlesex in Park Royal.

The couriers collect blood samples from doctors’ surgeries, clinics and hospitals and deliver them to TDL’s labs. The firm says 5-10 per cent of overall courier work relates to the transport of emergency blood, 90 per cent of which is delivering blood to support planned operations and only a very small part to unplanned emergencies.

The IWGB says talks failed over their bid to reverse more than a decade of stagnating pay, an approximate 30 per cent pay cut from 2015, or the 15 per cent cut in take-home pay, which resulted from an office move and rate changes in 2017.

It also says TDL failed to give an adequate pay increase to compensate for years of denial of rights – before TDL agreed to classify them as employees – and for the dangerous nature of the job.

The union says TDL has since tried to introduce new employee contracts which would result in the couriers taking “further cuts in pay”.

New staff have been put on these new ‘reduced’ contracts and the number of jobs given to long-term staff cut, the IWGB says.

The union added: “TDL’s refusal to meet the workers’ demands for modest increases in pay is in sharp contrast to the generous pay rises it has given its top two executives, who earned a combined £ 2.6 million in 2017, far more than any NHS manager.”

The pay rises demanded by the workers are also a “drop in the ocean” compared to the £60 million dividend payments made by TDL to its Australian parent company, Sonic Healthcare, between 2014 and 2017.

Alex Marshall, a TDL courier and chairman of the IWGB’s Couriers and Logistics Branch, said: “While TDL investors and managers get fat off of NHS contracts, the couriers who risk their lives every day to deliver emergency blood and pathology samples are being left to suffer under a regime of pay cuts and neglect.

“We are proud of the work we do, but that doesn’t mean we will allow managers to continue to take us for a ride. We deserve respect and decent pay.”

Catford-based courier of 20 years Terry Houlihan, 63, who has a family-of-three, said: “There is a lot of animosity. Wages have fallen in comparison to prices for years while prices go up – especially of petrol.

Young drivers with families cannot survive like this. “You are vulnerable all the time – TDL want things delivered faster all the time but you have to obey the speed limit or it is you that is in trouble.

The renewal of the gas and water pipeline network all over London has made it ridiculously hard. And you have to be constantly braced to react in an instant because pedestrians don’t look when they walk into the road.

I have been involved in crashes recently near Goldsmiths College in New Cross and near Heathrow. It is very hard.”

A spokesman for TDL Collect said: “It’s exceptionally disappointing that a minority of our couriers, already some of the best paid in London, have elected to strike.

While our couriers provide a vital service, their demands for annual take home pay higher than the average junior doctor’s and nearly twice that of a ward sister cannot be deemed reasonable.

“Their intention is to disrupt the transportation of medical samples from GP surgeries, clinics and hospitals to our laboratories. Our customers and their patients should be reassured that TDL has robust plans in place to mitigate any impact on our service.

Many of our couriers are appalled at the thought of a strike and the majority will work as usual, while external partners are in place should they be required. “We are absolutely committed to ensuring there will be no disruption to the normal collection of samples, nor to the minor part of courier work that relates to the transport of bloods required for transfusions.

We have paid particular attention to emergency blood transfusion requirements and will have 100 per cent back up in place. “TDL Collect’s pay levels have always been significantly above market rate, and we have one of the lowest churn [staff turnover] rates in the industry.

“We have been open to reasonable negotiation with the IWGB, the union representing less than half of TDL Collect’s 151 strong workforce since 2017, and accepted ‘worker’ status for our self-employed couriers in 2018, which means they benefit from holiday pay and pension contributions.

However, since the union rejected outright TDL’s most recent and reasonable pay offer to its members, their demands have become excessive and can no longer be considered reasonable.”

A company spokeswoman added: “The reference to directors’ salaries is of no relevance and misleading – a very significant portion of TDL’s work is for the private sector.”

“Some hospitals choose to use private companies or charities for some delivery work between hospital sites, which may include small amounts of blood. NHS Blood and Transplant delivers the vast majority of blood used by hospitals and can deliver as and when needed. Therefore, any strike action by TDL drivers should not have any impact on emergency blood supplies or deliveries needed for the treatment of patients.”