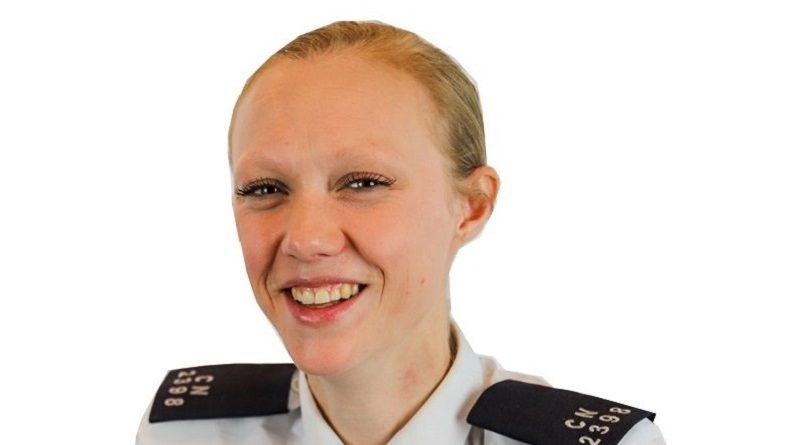 The courageous efforts of a Met officer who confronted a gunman in a hospital have been recognised with an award.

At the time of her brave deed, Sergeant Stevie Bull, pictured, was a PC for the Central North Command Unit, which covers Camden and Islington.

Working on an unrelated case, she was at University College Hospital in Bloomsbury in March last year when she confronted a man who was threatening staff with a firearm.

She put herself between the suspect and the hospital staff, helping to protect them and divert the gunman’s attention.

Sgt Bull closed the gap between herself and the suspect, giving clear commands to put down the weapon, and when he refused, she attempted to grab it.

In the struggle, she sustained a head injury after being thrown into a wall, but she continued to tackle the suspect, wrestling the gun from his hands, handcuffing and arresting him.

The firearm was later found to be a starter pistol, although Sgt Bull did not know it at the time of her heroic actions.

She said: “If I was faced with the same situation again I would do exactly the same thing. I wouldn’t change it and my colleagues would do the same thing as well. I didn’t really think about my own safety, I just acted on instinct.”

“I am incredibly touched that people who don’t know me nominated me for an award, both within the policing world and for the public votes I received.

It has been a real honour to be nominated and to see the great work of other individuals.”

Sgt Bull was presented with her award at the 24th Police Federation Bravery Awards, which took place last Thursday at The Royal Lancaster Hotel.

She was one of 71 officers nominated from 40 police forces up and down the country.

The nominees were shortlisted for acts of bravery that took place from March 2018 to March this year.

John Apter, national chairman of the Police Federation of England and Wales, said: “These awards highlight the incredible bravery that officers protecting our country show every single day.

I am immensely proud to have shared this day with such humble and brave officers and their families. They are a credit to the service and I am proud to call them colleagues.”

Before the ceremony, all the nominees attended a special reception at 10 Downing Street, hosted by Prime Minster Theresa May.

She said: “Time and time again our police officers put their lives on the line for our country, displaying incredible bravery and courage.

“Their everyday acts of heroism do not go unnoticed, and I would like to extend my gratitude to the nominees for their commitment to keeping our communities safe.”