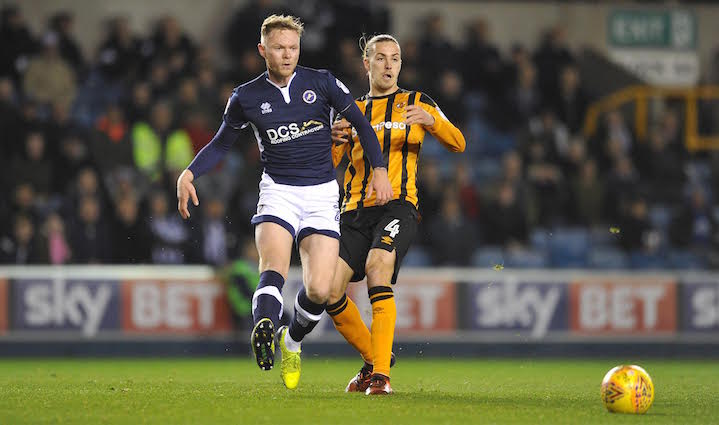 Millwall earned a battling point at home to Hull City that leaves Neil Harris’ side 18th in the Championship table on 19 points after 18 games, writes Conor O’Sullivan.

Both sides were guilty of poor finishing during an open and entertaining encounter in SE16.

Striker Lee Gregory missed two close-range opportunities at either end of the contest and sent a stoppage time chance from eight yards high over the bar. Millwall could have lost it at the death when substitute Evandro Goebel sent an 18-yard half-volley inches wide of Jordan Archer’s right-hand post.

Gregory found himself in on goal after five minutes following hesitancy by the Hull City defence. The 29-year-old had his strike partner Tom Elliott in space ahead of him but opted to go it alone and dragged his 10-yard effort wide of Allan McGregor’s right-hand post.

James Meredith was a willing runner from left-back all evening and his surging 38th minute dribble found Gregory free in the Hull box. His sharp turn and shot drew a fine save by McGregor.

George Saville and Ryan Tunnicliffe dictated possession in the opening stages but Millwall failed to capitalise on their dominance -City’s Jarrod Bowen wasted two good opportunities within minutes of each other in the first half when he dragged two efforts wide of Archer’s left-hand post.

Archer was forced into a fine save on the stroke of half-time following Kevin Stewart’s drilled 25-yard effort after the Lions defended a barrage of crosses.

Tunnicliffe played in his midfield partner Saville in the 53rd minute after a strong run in midfield but the Northern Ireland international blazed his effort over from the left-hand edge of the box after referee Jeremy Simpson played advantage.

Steve Morison and Fred Onyedinma were introduced early in the second half for Elliott and Aiden O’Brien respectively as Harris attempted to unlock a Hull defence that had come to grips with Millwall’s attacks.

Morison’s clever 65th minute knockdown from Meredith’s left-wing cross forced a corner and Shane Ferguson’s inswinging delivery was met by Shaun Hutchinson’s head  – he rose highest from eight yards and drew a fine one-handed save by McGregor. Hull failed to clear their lines from Ferguson’s resultant corner and the ball came to Onyedinma who sent his 15-yard effort high over the bar.

Saville was forced into some heroic defending as he blocked a drilled Hull strike and three Millwall defenders smothered the rebound as both teams pushed for the winning goal.

Saville found his international team-mate Ferguson with 10 minutes remaining but the winger’s left-footed shot from 20 yards was saved well by McGregor.

Tunnicliffe had a late effort on goal when he engineered space in the Hull box but sent his low strike straight at McGregor moments before Gregory’s miss and the Lions had to settle for a point.