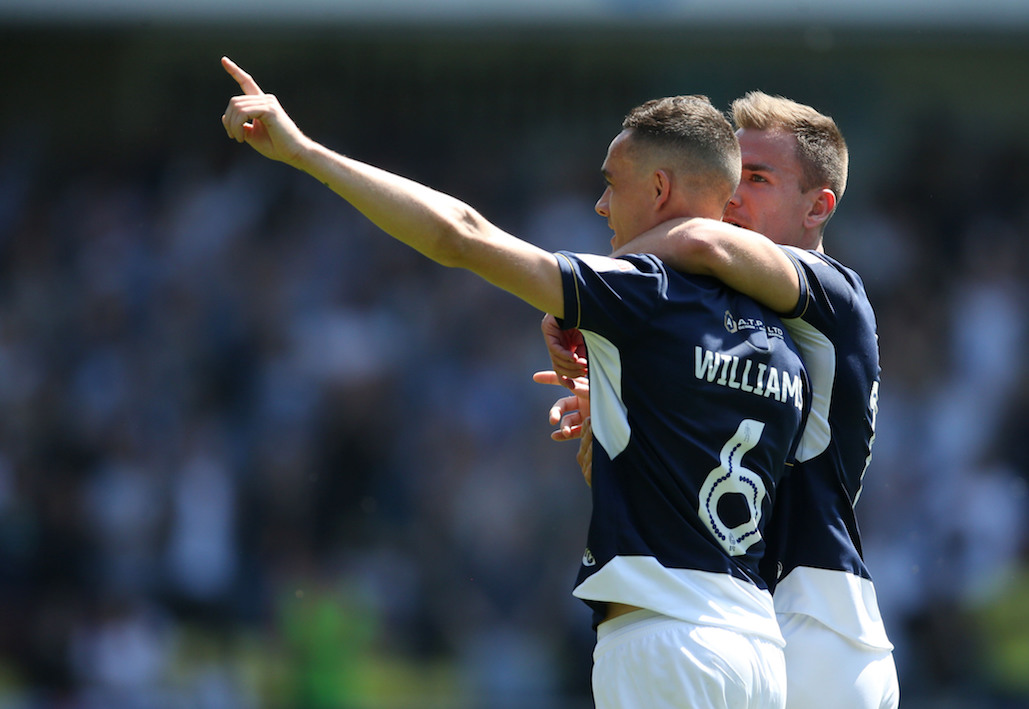 Millwall have finished eighth in the Championship with Shaun Williams’ first-half penalty ensuring that Neil Harris’ side finished on a high.

The Lions ended their run of back-to-back defeats as they once again put in a committed performance at a sunny Den.

And it was Williams who converted from the spot to leave them just win behind being level on points with Derby County, who took the final play-off spot.

“We’ll play you next year,” taunted the Lions fans to Villa, who will also extend their season for at least another week after bagging fourth spot in the table.

Gregory was unable to convert a second penalty late in the match, but Millwall’s defending – such a strong point this campaign and especially during their 17-game unbeaten run – ensured that the Midlanders could find no way back.

Millwall boss Neil Harris made two changes to his starting line-up with Mahlon Romeo’s groin injury ruling him out while striker Gregory – who has barely trained between matches in recent weeks due to a calf niggle – dropped to the bench.

Fred Onyedinma and Aiden O’Brien were promoted to the starting line-up.

Onyedinma produced a positive burst past James Chester in the opening moments but Jed Wallace could only poke the resulting cross wide.

Mark Bunn tipped over an O’Brien cross which drifted dangerously towards his crossbar before Shaun Hutchinson backed up exactly why he won the club’s Player of the Year award with a vitally-timed block on Jonathan Kodjia.

Referee Tim Robinson only took a couple of seconds to decide that Millwall merited a penalty on the hour mark. Henri Lansbury stopped Ryan Tunnicliffe has he bore down on goal with Villa failing to clear the initial danger. Williams brushed away Wallace’s attempts to take spot-kick responsibility to send Bunn the wrong way from the penalty.

Villa were struggling to create chances and Josh Onomah could only get a scuffed connection on Albert Adomah’s pass in the 33rd minute. The same player then struck an effort straight at Jordan Archer in the final action of note in the first half.

Williams headed a Ben Marshall corner narrowly over in the 50th minute before a chance fell Onyedinma’s way. The hosts broke swiftly with Steve Morison playing the ball through for the young attacker, but on his weaker left foot he found the Cold Blow Lane stand.

Onomah continued to let fly for Villa, this time with a drive which only just rose over the crossbar.

Archer, at fault for at least a couple of recent goals, parried away Conor Hourihane’s curling strike from the edge of the box.

Millwall had a chance to make the contest safe when they were awarded their second penalty of the game, for what appeared to be a handball spotted by the linesman.

But Dunn went the right way to deny substitute Gregory and also saved Williams’ follow-up, with Morison slicing his attempts at a further bite at getting the ball over the goal-line.