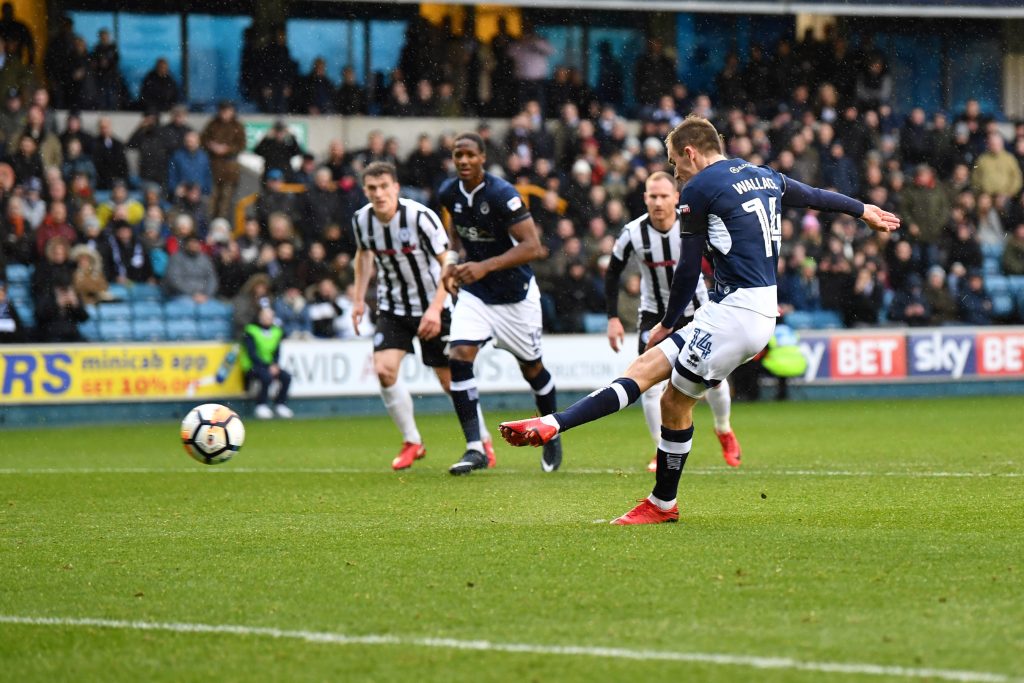 Ben Thompson drilled in a late equaliser for Millwall to ensure they are in the FA Cup fifth round draw – but they now face a replay at Spotland next month.

The Lions were trailing going into the closing stages of a wide open tie before they managed to make late pressure tell.

Thompson, who scored in the previous round’s straightforward victory over Barnsley, raced into the box to sweep home.

The South Londoners had rested a number of first-team regulars but needed the introduction of Steve Morison, Lee Gregory and Shaun Williams as they found themselves chasing the tie.

Millwall took the lead on 17 minutes from the penalty spot – and there could be no arguments when referee Andrew Madley awarded it.

Fred Onyedinma left two Dale players trailing after a superb spin on the ball and he broke into the left of the box before being wiped out by Donervan Daniels’ eager but blundering sliding tackle.

Wallace opted for power from the spot to take his goal tally to the campaign to six – the other five coming in the Championship.

It looked for a short spell after that the Lions would add to their haul and it needed a last-ditch clearance to deny Onyedinma latching onto Tom Elliott’s flick past Rochdale goalkeeper Josh Lillis.

But after signs of encouragement, Millwall went off the boil. Lillis clawed at a Shane Ferguson corner which was arced in dangerously, but that was to be his last major test of the opening 45 minutes.

Debutant Jason Shackell had made a fine sliding block to deny Mark Kitching and Rochdale found time and space as they passed the ball around without really working the hosts’ backline.

But that was to change as Henderson brought the League One side back level on 32 minutes. A backpeddling Jake Cooper saw a throughball thread through his legs as he tried to make a connection and the Dale captain dispatched a fine curling finish beyond the helpless David Martin.

Millwall were out early for the start of the second half – no doubt after some choice words by boss Neil Harris – but Rochdale continued to enjoy the supremacy and went in front on 53 minutes as Done smashed home from virtually on the goal-line.

The Lions finally had another effort on target in the 58th minute, Lillis batting away Tom Elliott’s full-blooded hit from the edge of the box.

Morison was brought on for Shackell and almost instantly the striker created a contentious moment. Wallace thumped the turf in frustration as he felt he was held back trying to latch onto the substitute’s cross.

Elliott twice had headed chances but put the first over from Onyedinma’s cross before Shane Ferguson’s driven angled cross was nodded straight at Lillis.

The tie was wide open now and either Martin or the left post – maybe a combination of both – kept out Andy Cannon’s blast.

Millwall piled on the pressure in the closing stages before Thompson set up the replay at Spotland. Morison crossed from the right and the midfielder rammed first time past Lillis at his near post.