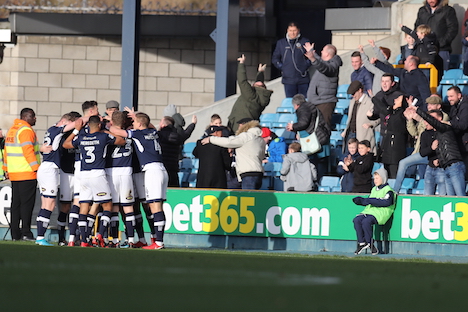 Jake Cooper headed home 20 minutes from time to earn Millwall a point after Wolves came back from a goal down but could not hold on for all-three points at The Den, writes Jake Sanders.

Millwall took an early lead through Lee Gregory, but goals from Diogo Jota and Romain Saiss turned the game in Wolves’ favour. Cooper converted from close-range to ensure a share of the spoils.

Neil Harris made three changes from his side’s 3-0 defeat at Derby County on Saturday as Conor McLaughlin, Shaun Williams and Tom Elliott came in for Mahlon Romeo, Ryan Tunnicliffe and Steve Morison. It was Williams’ first start since September 26.

Millwall started fairly well and John Ruddy was forced into making two saves early on. Firstly, Cooper headed straight at him and then he was there to deny Jed Wallace’s drive from 20 yards.

The visitor’s had chances of their own. Firstly, Helder Costa’s shot was deflected wide, then Jordan Archer made a fine stop to deny Matt Doherty at his near post. Archer’s punch from the resulting corner landed at the feet of Wallace and he broke away before finding Lee Gregory, who coolly fired under Ruddy to give Millwall the lead.

It should have been 2-0 minutes later, but Aiden O’Brien could only prod wide from a delicious George Saville cross at the back post.

Wolves had a golden opportunity to equalise, but Costa was denied by an outstretched leg from Archer when one-on-one.

The leaders started to dominate, but their finishing was letting them down. Costa fired over twice more before Cavaleiro blazed wide from Doherty’s pullback.

Wanderers did eventually score with almost the last attack of the half. Costa did well to beat James Meredith before finding Jota, who tapped home into the roof of the net from close-range.

Despite the setback, Millwall started the second half positively and had a chance to retake the lead. The ball broke kindly for Gregory, but Ruddy saved well with his feet to prevent Millwall from going back in front. Cooper headed wide from the corner.

Just when Millwall were in the ascendency, Wolves went ahead. Saiss, who was booked for tugging back Wallace seconds earlier, fired home. His 25-yard effort found the top corner, despite Archer’s best efforts to keep it out.

The visitors nearly went further ahead, but Jota could only divert Conor Coady’s effort straight at Archer and he pushed away.

Just when it looked like the game was getting away from Harris’ side they won a corner and Cooper headed home to make it 2-2. Shaun Hutchinson had flicked on at the near-post and his centre-back partner was there to nod in.

Wolves had chances to win it late on, but firstly Alfred N’Diaye blazed over from 20 yards and then Douglas was denied by Archer from a free-kick.