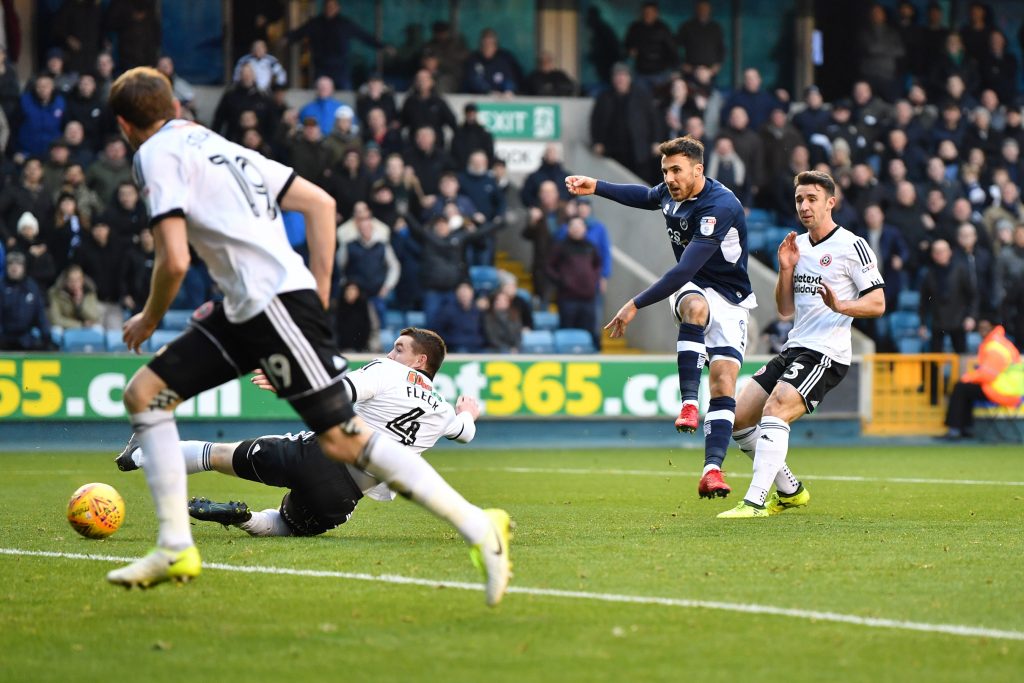 Millwall ended a six-game winless run in the Championship as goals from Lee Gregory, Mahlon Romeo and Jake Cooper saw them secure a 3-1 victory over Sheffield United.

Gregory scored his first goal since the end of September and did superbly for Romeo, starting in place of the suspended Conor McLaughlin, to put them back in front early in the second half.

Cooper’s late header – opening his account for the campaign – slammed the door on any prospects that the Blades might be able to cut back the deficit.

Jed Wallace’s return after a three-match suspension gave Millwall extra zip and energy breaking forward and that sense of adventure saw him move off his customary right flank and pop the ball to Gregory in the early exchanges, but after controlling on his chest any shooting chance had gone.

Millwall’s 14th-minute goal was a lovely counter-attack. Mahlon Romeo’s ball forward was flicked by Gregory to Wallace and the wideman showed intelligence by cutting across a chasing opponent – denying them a fair attempt at a tackle – before finding Morison, Gregory allowed the pass to run across him before driving straight and true beyond Jamal Blackman.

Gregory’s hold-up play has always been a strength and soon after he played in Morison, but the experienced frontman could not pick out the unmarked Shane Ferguson on the left of the box.

United were strong on the front foot – no surprise considering their lofty position in the table – and they were lucky that David Brooks failed to get the execution right as Chris Basham marauded in from the right wing.

Blackman made a big save to keep it at 1-0 as he repelling George Saville’s full-blooded strike. The build-up had seen James Meredith’s long throw flicked on by Morison.

Brooks nudged United level in the 42nd minute. Mark Duffy’s chip over the Millwall defensive line saw the young Welshman finish at the first attempt from a tight angle.

The Lions switched to 3-5-2 in the second half and the Blades – despite a couple of early moments of concern – struggled to break the hosts down.

Gregory was brilliant for the equaliser. His sliding tackle was textbook to stop a dangerous break and his next touch slipped in Romeo, who kept his composure to beat the advancing Blackman.

Ferguson’s 79th-minute free-kick was just inches away from Cooper converting at the back post.

But the big centre-back had his goal in the 88th minute. Wallace’s free-kick was lofted across the face of goal and his header clipped off the crossbar and then spun back out. But almost immediately it was ruled to have crossed the line – which seemed the correct call.