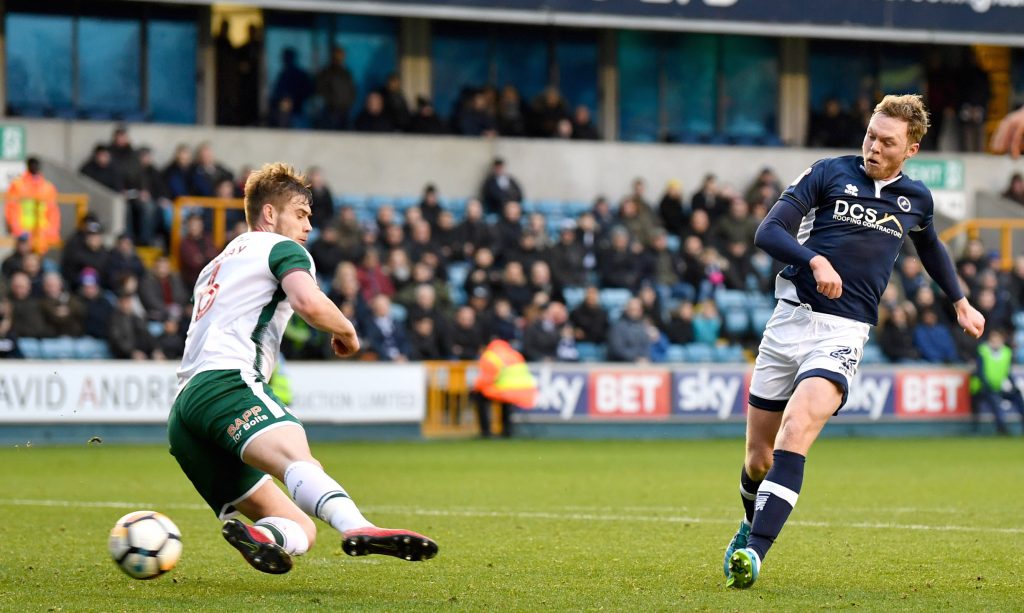 Aiden O’Brien netted twice – Ben Thompson also notching a rare goal – as Millwall easily defeated Barnsley to march into the fourth round of the FA Cup.

Fred Onyedinma was also on target for the Lions, who were already leading when Joe Williams was shown a straight red card early in the second half.

And there was to be no doubting the outcome as Millwall finally enjoyed a win over the Tykes, who had beaten them in the League One play-off final two years ago and at The Den earlier this season.

Millwall were the better side in the opening 45 minutes but found themselves trailing on 11 minutes.

A ball down the right found Adam Hammill in space and although his initial cross was blocked by Conor McLaughlin, Potts was on hand to slam past David Martin from close range.

But Millwall began to put heavier pressure on the visitors as the half wore on with Jed Wallace switching to the left flank.

One of the winger’s crosses only skimmed the head of Onyedinma and then O’Brien headed wide as Shaun Williams got a second bite of delivering from the right wing after his initial corner was headed out by Ethan Pinnock.

Soon after the former Republic of Ireland under-21 international was on target for the first time since September 16.

Onyedinma got a shout to leave Wallace’s low ball in and O’Brien’s effort clipped off the legs of Adam Davies on its way into the back of the net.

Captain Tony Craig made an excellent tackle to dispossess Potts to spark the attack.

Wallace produced a fine 40-yard diagonal ball for O’Brien soon after and although he managed to nick the ball over Davies but it lacked the correct direction and Dimitri Cavare was able to eradicate any danger.

Just before the break the goalscorer and assist-maker swapped roles but Wallace, under pressure, could only prod O’Brien’s pass across the face of goal.

Thompson was excellent on a rare start and got his name on the scoresheet for the first time since April 9 2016. O’Brien provided the cutback and the 22-year-old midfielder drilled into the bottom right corner.

Williams was dismissed in the 51st minute before Jake Cooper spurned a great chance, clipping the ball over from Steve Morison’s cross.

But it was 3-1 on 56 minutes with O’Brien claiming the goal of the match. Wallace saw his shot blocked but O’Brien produced an effortless-looking curler from the edge of the box which flew past Davies.

Morison raced through but dragged his shot wide before he turned provider for Onyedinma’s goal. The veteran frontman produced a delicate dink though and the young attacker finished for his first goal of the campaign.